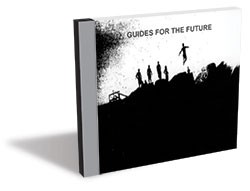 Guides for the Future may not yet be a household name. Hell, they might never be one. But the Burlington-based trio sure has the merchandising thing down. Click the “Store” link on the band’s website and you’ll be redirected to a Cafe Press page featuring all manner of GFF paraphernalia. From standard fare such as T-shirts and bumper stickers to more inventive baubles including beer steins and pet food dishes, virtually any knickknack you could want — emblazoned, of course, with the band’s logo — is available for purchase. Is it a little disingenuous to have such a slick merch operation before they’ve even rung up 2000 MySpace hits? Absolutely. But we all know the future of the music industry lies in ancillary moneymakers, right?

Actually, as the music biz scrambles to turn a profit in the digital age, that last line is probably more prescient than most would care to admit. But, judging by their deceptively clever self-titled debut, Guides for the Future’s true intentions are far less callous than their marketing savvy suggests. (FYI: Although the products they sell are real, Cafe Press is essentially a novelty site. The implication being that, while it’s suspicious for an unknown band to offer doggie tees, it is also just kinda cool. Dig?)

GFF claim a variety of influences, from indie rock to jazz to prog to punk to hip-hop to jam to … well, you get the idea. And throughout their debut, they make a point to spend quality time with each. But unlike many bands whose genre descriptors are glued together with hyphens, Guides traverse idioms with playful curiosity bordering on Camper Van Beethoven-esque subversion.

Lead vocalist/guitarist Robb Spensley is GFF’s creative force. From the opening gun, the rambling current-affairs diatribe “Stay in School,” through to the finish line (“Vampires of L House”), his dry and at times acerbic wit leaves an indelible mark. But Spensley tempers his observations with a sort of detached bizarreness that fans of early CVB-era David Lowery or even (especially?) Frank Zappa could appreciate.

Drummer Cale Williamson and bassist Tom Mason prove capable foils for Spensley’s disjointed but danceable ruminations. Their ragged, slightly off-kilter performances are appropriate, given the material, especially on tracks such as the schizophrenic “Magic Is Norm (Dry Your Eyes)” or the frenetic “Chaos Kids.”

Will Guides for the Future ever be big enough to justify their gimmicky merchandise? Doubtful. But one imagines that to be the point, at least partly. In the meantime, local audiences with a taste for offbeat pop will likely enjoy what the future seems to hold.

Guides for the Future’s eponymous debut is available on iTunes.