Gubernatorial Candidates Raised $423,812 From "Undisclosed Donors" -- Does It Matter? 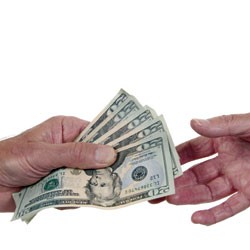 Vermont’s campaign disclosure laws are notoriously weak. Donors who write $2000 checks to political candidates aren’t required to reveal their employers or occupations — motivation remains a secret, unless you know enough about the giver to connect the dots.

But there’s a class of campaign contributors who are even more mysterious: small-dollar donors. Under state law, anyone who gives $100 or less to a campaign can remain anonymous. Once someone gives more than $100 in total — for instance, a donor who writes a $25 check, then a $100 check a month later — his or her name becomes public.

In this year’s crowded governor’s race, the candidates have collectively raked in a small fortune from nameless low-dollar donors.

According to information supplied to Seven Days by the campaigns, four Democrats and one Republican have collectively raised $423,812 from 7759 donors who have given $100 or under. That means a full 14 percent of the $2.9 million raised in the 2010 governor’s race so far has come from anonymous individuals.

Democrat Susan Bartlett’s campaign could not produce the data without a cumbersome database search, according to campaign manager John Bauer.

Political candidates covet small-dollar donations, which are seen as a sign of grassroots support as well as a blunt against the influence of big money from entrenched special interests.

Election watchdogs — and the candidates themselves — disagree on whether these donors’ anonymity represents a significant problem in Vermont. Paul Burns of Vermont Public Interest Research Group and Allen Gilbert of the Vermont ACLU, both staunch advocates for transparency in government, tell Seven Days they’re not worried. Requiring more information about high-dollar donors is a more pressing priority, they say.

“For $99, we’re not talking about someone having great influence over a candidate,” Burns says.

Tony Gierzynski, a money-in-politics expert in the University of Vermont’s political science department, adds, “I imagine there are a lot of Democrats who are very happy they could give small amounts of money to the candidates without their names appearing, so that other candidates wouldn’t be unhappy with them.”

But Gail Zatz, legislative director of Common Cause Vermont, is troubled by the practice.

“Nondisclosure of all contributions under $100 is one example of why Vermont deserves an ‘F’ and ranks 43rd in the country on campaign finance disclosure,” Zatz says, referring to a 2008 survey of states by the Campaign Disclosure Project. As groups like Common Cause know well, “special interests” can escape public scrutiny through “bundlers” — individuals who funnel donations from numerous like-minded contributors to a candidate. The secrecy makes it impossible for the public, journalists and watchdog groups to know who or what may be influencing a campaign.

Opinion is split among the gubernatorial candidates, too — along somewhat surprising lines. Dubie, the state’s lieutenant governor, and Dunne, the Google executive and former state lawmaker, both support disclosing the names of small-dollar donors. Racine opposes it, and Shumlin appears somewhat indifferent. Markowitz and Bartlett declined to weigh in on the issue.

“The point of disclosure is to make public those people who have made large contributions to show who may have a major influence in the election,” Racine says. “I think it’s unnecessary to require disclosure of small-dollar contributors.”

Shumlin says, “It’s going to take a lot more than just requiring small-dollar donors to disclose their info for Vermont to have adequate campaign finance rules.”

“Disclosure thresholds” vary from state to state, according to the Campaign Finance Institute, a Washington, D.C.-based research organization. Fifteen other states, including Rhode Island, Alabama and Oregon, are like Vermont: They allow candidates to collect $100 checks from donors without naming them.

Several states set a lower limit. Wisconsin requires donor names for anything over $20, and New Hampshire and Wyoming set the limit at $25. A few states put it higher than Vermont; in Nebraska the limit is $250, and in New Jersey, it’s $300, according to the Campaign Finance Institute.

Expect small donations to get even less attention as the governor’s race moves from primary mode into the general election. Big money will rule the day — especially for the Democratic nominee, political observers say.

“The Democrats are going to have to focus on large donors because they need to raise money quickly,” says Bill Grover, political science professor at Saint Michael’s College. “Brian Dubie’s sitting on a fairly substantial war chest.”