Gubernatorial Candidate Emily Peyton Fights for a Place at the Table 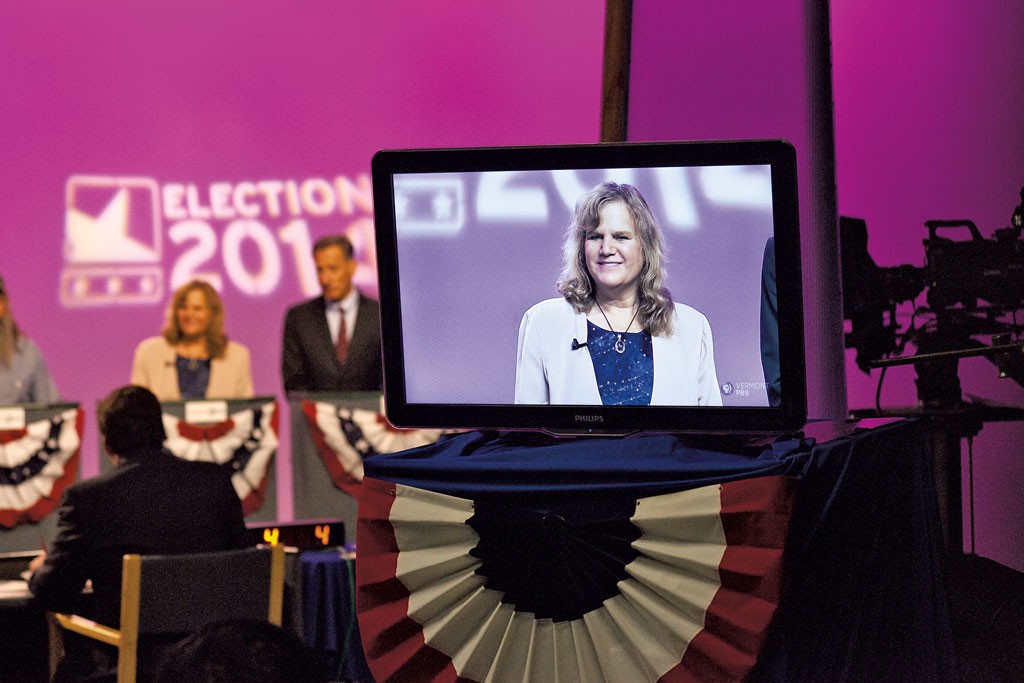 Emily Peyton was drawing a dragon. "I really should be doing this," she said ruefully, pointing her black pen at a pile of campaign materials to her right. Also on the table: a thick paperback titled Extreme Prejudice: The Terrifying Story of the Patriot Act And the Cover Ups of 9/11 and Iraq.

The problem, according to Peyton, is that the media have willfully ignored her. "It's a disservice to the people for the press to decide I'm not a viable a candidate," she said last Friday during an interview at Red Hen Baking in Middlesex.

In the same journal as her drawing, Peyton had sketched a 20-by-40-foot modular home. This is part of her platform: Build houses for homeless veterans from hempcrete, a concrete-like substance made from the plant's core; and manufacture Rolls Royce-quality cars, also from hemp. To end the opiate epidemic, embrace hypnosis, meditation and marijuana in lieu of prescription painkillers. To break free of the current monetary system, which is "controlled by people who are destroying the planet," establish a state bank. To increase food security, give small plots of land to people to farm tax-free.

Gubernatorial candidates need 500 signatures to get on the ballot in Vermont. This year there are seven contenders. Unlike some of them, Peyton, an independent making her third run, runs a bona fide campaign. The backseat of her tiny Toyota is full of lawn signs, which were cropping up in far corners of the state long before Republican Scott Milne or Libertarian Dan Feliciano even announced. She took a refurbished 50-year-old tour bus around the state, stopping to march and sing in crosswalks.

On the digital side: Peyton has a website — and she tweets. A lot.

Fundraising, however, is another matter. Peyton, who is supported financially by her composer father, has never done it. She said her supporters tend to be poor, and she'd shun corporate money if it ever came her way.

Applying many of the same strategies she's employed to win votes, the 55-year-old Putney resident, who describes herself as an "Earth activist," has also been on a four-year crusade to get more media coverage.

In 2010, she started showing up at local newspaper, television and radio headquarters, demanding to be heard. When that didn't work, she sued several outlets for excluding her from debates. This year, she got Vermont prisoners to send postcards to news organizations from their Kentucky cells, urging editors to "make more coverage of Emily Peyton's candidacy." Peyton gave the cards to Victor Hall, who was convicted of aggravated sexual assault, to distribute at the correctional facility where he is incarcerated. Hall had previously sent Peyton a nine-page letter claiming to be innocent. "I'm not a judge but I sense he's got a sincerity to him," she said.

Peyton takes full of advantage of opportunities to leave comments on websites, including those of media outlets such as Seven Days, laying into them for ignoring her. Her partner in the hempcrete project also contacted a Seven Days advertiser, alleging a "lack of impartiality in its coverage of political candidates" and censorship. "Let them know it's not OK with you," he wrote.

Peyton, who grew up in Princeton, N.J., speaks in a singsong voice with an inexplicable hint of Southern drawl. She has sandy hair and a square jaw and will likely wince at those eight words because they describe her, rather than her platform. Her appearance, or more specifically "my granola mannerisms," is one of Peyton's theories to explain why the press has decided she is not credible. Another: The press enjoys a "special relationship" with major party candidates, offering them coverage in exchange for "scoops" later on.

To get more coverage, Peyton ran in the GOP primary this year. Contrary to her claim that media ignores her, it kind of worked. The Burlington Free Press ran a front-page story on her under the headline "New Face of Vermont GOP?" Vermont Public Radio gave her 30 minutes of airtime and invited her to its primary debate.

Then Scott Milne entered the race, at the last minute and with little political experience. Tearing up in frustration, Peyton described how the media flocked to him anyway, simply because he was assumed to have the Republican leadership's blessing. It's been so discouraging, in fact, that Peyton is thinking about quitting politics after November.

Peyton's not the only underdog to push the limits of media relations. Peter Diamondstone, a perennial candidate for the Liberty Union Party, was arrested in 2008 for refusing to leave the stage of a gubernatorial debate he wasn't invited to. During the 1970s, Bernie Sanders ran for governor and U.S. senator in four elections and finished in the single digits in each race. He too lashed out at local television stations for excluding him from debates.

It's OK for the press to prioritize credible candidates, some local news directors say. The public deserves to hear from the people who have a chance at winning; the inclusion of others dilutes the debate.

But can the press objectively assess credibility? Neither Peyton nor Diamondstone thinks so.

With polling they can, according to Kelly McBride, a media ethics expert at the Poynter Institute, a Florida-based journalism-training center. "This is not a new thing for an unknown or a dark horse to complain that they are being disenfranchised because they can't break through," McBride said. "I think independent legitimate polling is the only way to know whether somebody is a serious contender or not." Past election results work, too, she added.

Peyton clinched 2 percent in one of the first polls of the gubernatorial race conducted in late summer by CBS News, the New York Times and YouGov.

But without press attention, isn't it nearly impossible to poll well?

Not so, in McBride's view. "I don't see it as a chicken-or-egg question, because it's not the responsibility of the media to do public relations for a candidate." In her opinion, "There are lots of political strategies for getting an unknown candidate into the public sphere. There's a political machine for doing that, and the press can't be the political machine."

Looking at the last four gubernatorial debates — each of which has featured a different cast of candidates — it's clear the Vermont press corps isn't letting poll numbers be its only guide.

Some news organizations kept it black and white — the Burlington Free Press invited candidates with major-party status; Vermont PBS invited everyone to participate, as it always does. Peyton was one of seven souls who would be governor, and she used her airtime to make multiple plugs for a state bank. She stood next to Shumlin, who also hails from Putney, and before the cameras starting rolling, tried repeatedly to engage him in conversation. She made him an offer, Peyton later explained: Put her in charge of a state hemp or tax-free farming program, and she'll drop out of the race.

WDEV-FM's Mark Johnson decided whom to invite to his Tunbridge World's Fair debate. He said he looks at whether a candidate is credible — a marker he readily admits is subjective — and whether they are "actively campaigning."

This year, Johnson determined that Gov. Peter Shumlin, Milne and Feliciano fit the bill. If other candidates made the effort to complain about being left off the roster, he decided in advance that he'd invite them, too.

Peyton, predictably, did. "I think she added to the debate that day," Johnson said, despite the fact that she "chronically accused me of being anti-woman" throughout.

"It's a real balance," Johnson said. "You want voters to have a chance to see the candidates who have a chance of winning really debate each other head to head, but I don't think we in the press want to be in a position where we are marginalizing people or making judgments for the voters."

Vermont Public Radio left Peyton off its guest list, inviting Shumlin, Milne and Feliciano to its general election debate. News director John Dillon said VPR sticks to major party candidates, with occasional exceptions if someone has shown a "significant presence" in the campaign.

"We included Feliciano after some discussion because he had registered almost 15 percent in a Republican primary," Dillon explained, whereas Peyton came in with just under 7 percent.

The debate on WCAX was a cozier affair, with only Shumlin and Milne standing at side-by-side podiums. News director Anson Tebbetts said he relies on fundraising reports and polling to gauge a candidate's "electability," and he considers double-digit polling a good indicator of this.

Last Thursday, during the Vermont PBS debate, moderator Stewart Ledbetter asked candidates: If you could sneak one bill by the legislature, what would you choose? Peyton didn't mention hemp or state banks. Instead, she used her hard-fought airtime to argue for inclusion. "I'd like to make sure that every public debate for public office includes every balloted candidate. Rutland Herald, Times Argus, Vermont Digger, Seven Days and other press have never ever run one article about my platform so that you know what I have to offer."

Peyton is not insensitive to people's impressions. She lugs a black box full of hemp samples (hempcrete, fabrics, insulation) around, showing the plant's potential to anyone who'll listen, and sometimes she'll hear people "tittering" about it. At one point during the interview, she paused mid-sentence and said, "There's good crazy and bad crazy, right? ... We've got a lot of bad crazy going on in government and corporations. And we've got a lot of wonderful crazy people who are doing new things like farming, and that's the crazy we want to come forth."