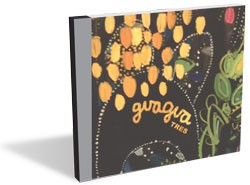 Imagine ferrying recklessly down unpaved Caribbean roads aboard a Technicolor tour bus. Mountain villages fall in and out of view, chickens cluck in overhead compartments, the driver shouts something in Spanish. Wide-eyed with exhilaration, you grin broadly at the passing tropics.

This is how the world looks from the windows of a gua gua — a slang term for “bus” used throughout the Caribbean. And such imagery serves as inspiration for Burlington’s Latin-flavored ensemble Guagua, who bring a similar spirit of adventure to our latitudes. With Tres, the 12-piece swings expertly from calypso to rumba, burning through island staples faster than a Putumayo compilation.

Despite some predictable phrasing, tracks such as “Sandia” and “Chioggia Beat” are sweet as summer papaya. Who can resist the driving thump of congas? Or Ray Vega’s crisp trumpet attack? A journeyman who once jammed with Tito Puente, among countless others, Vega guests alongside founders Geoff Kim, Raphael Groten and an esteemed local cast.

Guagua’s veterans continue to dazzle, building polyrhythms that will loosen even the most jaded, frost-weary hips. “Subterranean Subterfuge” boasts flautist Dominique Gagne’s best work yet, as she trills urgently amid squealing horns and Afro-Cuban percussion. The syncopated showdown is sure to leave listeners breathless, pitting pianist Shane Hardiman against a battery of brass. And while Rio may seem a world away, “Samba Strikes Back” shuffles hypnotically, flirting like a breezy, Brazilian afternoon.

Still, as 2008’s Psychotropical suggested, these cravings alone no longer define Guagua. There are also jazz gems to be found. Soaked with swinging piano and fluid guitar runs, “Squibble” might have come straight (no chaser) from the Blue Note songbook. Quiet through most of the album, John Thompson’s bass finally muscles in, as Vega sets the air ablaze, blowing majestic echoes of Miles Davis. It’s a black cherry atop this pitcher of piña colada.

Habitués of world music — in either hemisphere — know a good thing when they hear it. Rich with Caribbean flavor, Tres is the quickest way to travel south of the border. So save your pesos, amigo. Like their vibrant namesake, Guagua will spirit you just about anywhere.

Guagua celebrate the release of Tres this Friday, January 29, at Parima.