Grin and Bare It 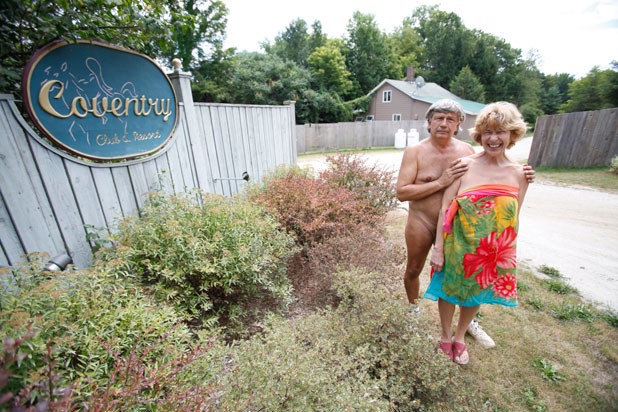 On summer vacation, plenty of people like to let it all hang out. But at Milton’s Coventry Club & Resort, they really let it all hang out. The 30-acre preserve on glittering Long Pond is a nudist camp that operates from May to September, welcoming up to 150 vacationers to its cluster of cabins and campsites.

Susan Lembcke and Bill Perreault have owned and operated Coventry since 1999. Founded in 1956, Coventry used to be primarily a retreat for “more liberal” Canadians, thanks to its previous owner, who was also from up north. Now license plates from around New England dominate the backs of RVs, many of which are parked there for the summer.

On a recent 68-degree weekday morning, a game of petanque is in full swing, but there don’t seem to be any extra balls on the court. Most everyone is clothed, including Lembcke, who wears a long, lavender T-shirt with a line drawing of Lady Godiva, the club’s mascot. “It’s a bit cold,” explains Perreault, who prefers to wait for the mercury to rise above 70 degrees before he dresses for work — in sneakers and socks.

Thanks to this summer’s sizzling temps, business has been boffo for the buff retreat, and August is its busiest month.

“The body functions in the heat better without the burden of clothes,” says Lembcke, 61, who began baring all in 1991 when she met Perreault. “And the stress of being zipped, tucked and buttoned properly has been relieved.”

Running the resort, which includes a clubhouse, snack bar, hot tub, beach, volleyball court, water-sports area and a wagon for hayrides, is like running any other inn, say Lembcke and Perrault, “except for the occasional explanation to a newcomer.”

Outside on the grounds is where their job gets complicated. “The daily activity can be anything from fixing a toilet to public speaking at a meeting,” says Perreault, a 62-year-old grandfather of three who has been practicing social nudism since 1988. “One needs to be adequately skilled at all trades.”

SEVEN DAYS: So, is this place clothing optional, or…?

BILL PERREAULT: No, we steer clear of the “optional.” … When it’s optional, you can come in, wear clothes … not so much with the women, but the guys, you don’t know what they’re doing. If he’s got the wrong state of mind, he’s out of here. That’s why we call it nude, not clothing optional. … At some point, you need to be nude. As far as the water, the hot tub or the lake, you need to be nude.

SD: How did you get into nudism?

SUSAN LEMBCKE: I used to love to sunbathe in the nude; I’d do it in the backyard or the ocean, but I’d never done social nudism. It was actually difficult in the beginning. You weren’t nude unless you were in an intimate situation with other people, so it was very difficult to get over that part … I finally said, “I’m uncomfortable; attention is being drawn to me by having my clothes on.” I wanted to blend in, so that’s how it happened.

BP: An old girlfriend and I were at a place in New Hampshire, and it was kind of a sexual dare. I didn’t want to chicken out.

SD: I see you have a talent show — what kind of talent?

SL: We don’t know yet! A young girl does gymnastics; we have another couple that does tai chi, and another Canadian that sings beautifully, so we’re hoping that they will perform.

SD: And the wine-and-cheese social on August 13? And Country Western Day on August 20?

SL: Yep, actually we’re going to have [the wine and cheese social] down by the fire. Bill and I are now the entertainment committee…

SD: What are the most popular events?

SL: The luau! We have a tent up, and we have a DJ, and [this year] people were in the water, and it was a beautiful night; people were dancing … and these were older people, older than us!

SD: What about for dancing, or some of the more vigorous water-sports activities — can that be difficult for some people?

BP: We have a 5K run every year, and some of the women, they’re holding up top.

SL: And I think a guy might even want something.

BP: The body knows; it will protect itself. Back in the day, the Olympics were done in the nude. Clothing wasn’t an issue back then.

SD: What about the bugs?

SL: We miss the bats.

BP: I don’t think it’s more of an issue here than anywhere else; we use bug spray, and suntan lotion, which the bugs don’t seem to like.

SL: We put Tiki torches around.

SD: How do people find you?

SL: It’s so important. Some of our members don’t care, and we don’t care about our last names being published, but some people can’t; it could jeopardize their job.

SD: Does anybody just randomly show up? What’s your policy on that?

SL: I’ll give them a tour, and that’s it; if they want to stay, we let them stay. … Bill believes, we let them in, and if they do something wrong, then they’re out of here.

BP: It varies; some people come all buttoned up and nervous, and they just see everybody out there, and off it comes and into the water they go. … And you have others who just can’t get over it, who wrap up in a towel, get to the edge of the water, drop the towel, jump in the water, come back out and grab the towel. … We joke about a lot of eye contact, you know.

SD: Where do you go in the winter?

BP: We go down south to North Carolina. I’ve always wanted to hang a sign up here: “Clothed for the Winter.”