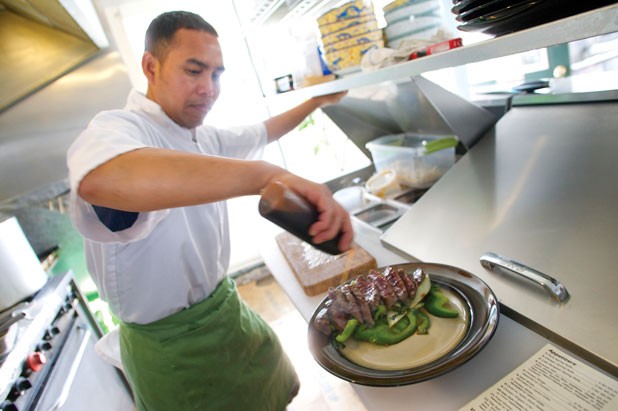 Vermont has plenty of Chinese and Thai restaurants, and these days Greater Burlington residents have been seeing Vietnamese eateries open left and right. But until last spring, the state didn’t have a single place that specialized in Cambodian fare. That changed when chef-owner Chy (pronounced Chee) Tuckerman opened Angkor Wat in the quaint little town of Woodstock. “I’m probably one of the only Cambodians in the area,” he guesses.

How did someone born on a farm halfway around the world end up running a restaurant here? “It was a long journey for me, a long road,” Tuckerman says.

In 1982, when he was 14 years old, Tuckerman fled the country to escape the remnants of Pol Pot’s totalitarian regime. He ended up living with a foster family on the West Coast, but instead of finding a loving home, he was abused, as were the family’s other four foster children. “We didn’t get treated as a family; we were more treated as slaves,” he recalls. “We worked; none of us finished school. They shoved me and pushed me and slapped me.”

Dismayed at this treatment, Tuckerman started running away from home regularly and took a mishmash of jobs to stay afloat. “I would go with my friends and do hip-hop dancing and breakdancing for money,” he says. He worked in the food industry, too, as a dishwasher in restaurants and a staffer at a tofu factory. “Back then I was in a dark room,” he says of this period in his life. “I could tell you so many stories you could make a movie out of it.”

Finally, Tuckerman crossed the nation to join an old friend from his homeland in Lebanon, N.H. There he kept working in restaurants, mostly doing menial labor.

One day, he noticed a bakery for sale near his home. “It clicked for me right there,” Tuckerman remembers. He bought the business, called the Blacksmith Bakery, and learned to make cookies, croissants and cakes on the job. “I had no skills, no education, no nothing,” he says. In 1997, he moved to Woodstock and landed a job as a pastry chef at Mountain Creamery, a position he held for a decade.

But what Tuckerman really wanted was to recreate the flavorful fare of his childhood in his new home. “A lot of restaurants taste the same as another restaurant. I want to bring something different, exotic and authentic,” he avers. That’s what he’s doing at the 16-month-old Angkor Wat, named for the famed Cambodian temple. His customers are so enthusiastic that some dine there weekly. Other area restaurateurs — including the owners of authentic Italian eatery Osteria Pane e Salute — are known to stop in for lunch.

Now that he has a wife and two children as well as his own restaurant, Tuckerman has begun to find peace. “In my life I went through beyond hell, but now that I have a wonderful family and I’ve made something of myself, I never look back,” he says. “This is my new beginning to have a restaurant. I’m happy doing this for people. I’ve got wonderful clients and wonderful friends.”

Because his restaurant and his life story are so uncommon, especially in Vermont, we decided to learn more about Chef Tuckerman.

Chy Tuckerman: My father was what here is called a priest, but we called them Buddhas. He was really wealthy. We had a home; we had land; we had everything back before the Khmer Rouge came. My family had a little farm [in Cambodia] back in the old days. We produced wines and stuff. My family raised animals. We didn’t kill them; we just raised them for fun, for the kids to look at. But I was never brought up as a vegetarian.

I don’t remember a lot of the Asian vegetables, [but I know there were] lots of cucumbers, string beans, bok choy and cabbage. Back then I’d never seen broccoli.

We had unbelievable fruits. At the farm we ate a lot of coconut, jackfruit and lots of toddy palm. Mostly guys climb up to get them. Inside [toddy palm is]t really white. If you put it in an ice bath, it’s a wonderful fruit to eat in warm weather. We have a lot of rambutan; it’s kind of like lychee, but lychee’s a little slimy and [rambutan] is not. Mango — oh, my God, amazing. Huge starfruit. Soursop would grow around the house, also bananas and a lot of sugarcane.

Our breakfast back home is a rice noodle soup called khtieau. Most people eat that; it’s really popular. Because there are lots of ingredients in the stock, it’s very healthy. It’s low fat and gives you a lot of energy.

SD: What did you eat when you came to the United States?

CT: Back home we grew rice and ate a lot of rice. When we first came [to the U.S.], there was no rice or anything like that. My foster parents, they steamed broccoli and put on the yellow cheese for us. We just had no clue; we didn’t even know what it was. They took me to McDonald’s, and that was exciting because we didn’t have hamburgers [in Cambodia]. I just started at the beginning to love everything.

SD: Name some of your favorite foods.

CT: Seafood is my favorite. I love lobster, shrimp, fish, crabs, all this stuff. [Another is] roasted chicken, but the chicken has to be marinated. It’s like Peking duck but with different ingredients: lemongrass, lime leaves and coconut. Let it sit overnight, then roast it in the oven to make it nice, crispy and brown. Chop it up and put it onto huge plates. That’s my favorite dish, too.

SD: Have you ever eaten something truly weird?

Back home we eat what they call “woodworms.” You chop the wood and find white worms bigger than your thumb. You take them home and sauté them in a fry pan. It’s really good, but Americans think it’s gross. It sounds really weird, but I love it. They have lots of protein.

I like a challenge and could learn to love any kind of food. I watched the Discovery Channel a couple weeks ago, and [on a show] this woman raised beavers for the meat. It’s like a farm. When you see that, you feel bad [for the beavers], but at the same time I’d like to try it. What does it taste like?

CT: The last thing I ate right now is doughnuts. I have doughnuts and coffee from Maplefields every day, every morning. People say, “How come you don’t put a pound on you?” and I say, “Because I move.”

SD: What foods are always in your pantry?

CT: Oh, my God! I’m not going to lie: None of us are fat people, but we have a lot of junk like potato chips, salsa, Oreo cookies, pasta, ramen noodles and all this stuff. If anybody wants to lose weight, tell them to eat ramen noodles.

I’m not American, but this is my home, this is my life; I’m gonna die here. You look at my pantry and my cupboards; it’s just like an American’s. You wouldn’t see any Asian at my house; the only place you see it is at the restaurant. I don’t cook anymore at home. My wife cooks for the kids.

SD: If you could have any chef in the world prepare a meal for you, who would it be?

CT: I would love to meet Rachael Ray; she’s a really talented, incredible woman. I read some of her books and I watch the TV of her, too. She does a lot of things, and she always comes up with ideas herself, and so do I. She’s not an “Iron Chef” or a “Top Chef.” I would kick it up another notch with her.

SD: You’re trying to impress somebody with your culinary prowess. What do you make?

CT: I’d probably do Florentine cookies, because a lot of people never had them. They’re made with nuts, butter, lemon zest, orange zest, coconut, raisins ... You top them off with chocolate. It’s a lot of work, but they’re just amazing cookies. I bake them from time to time, mostly in the winter. And I’d do Mexican wedding cookies with ground nuts and coconut; you bake in the jellied fruits: apricots, raspberries. Chocolate-chip cookies and oatmeal raisin: That’s too boring for me. I’ll make unbelievable croissants, Danish, coffee cakes and all this stuff.

SD: Describe your best meal ever.

SD: And your worst?

CT: I just don’t like lamb; I don’t like the smell. I had it once, and it just wasn’t for me. It smells gamey, really strong.

CT: To tell you the truth, I never [use them]. I just do what I know myself.

SD: If you could travel anywhere to eat, where would you go?

SD: Name a local restaurant that you patronize.

CT: I never go to any restaurants around here. Caleb [Barber] and his wife [Deirdre Heekin, the owners of Osteria Pane e Salute] were here yesterday or two days ago. They’re wonderful people, and I hear their food is really good.

CT: I don’t drink wine; I don’t drink beer: I’m nonalcoholic. I drink a lot of coconut juice, but not all the time. Mostly I drink water.

SD: If you weren’t a chef, what would your job be?

CT: Most people are looking for really strong flavors. A lot of smokers need that because they can’t taste. For me, as a chef, you don’t want to do that: You want to taste everything on the plate, not just the sauce. I want you to taste the green beans, the broccoli, the salmon. That’s what my food is about; it’s well rounded.

SD: What are your hobbies?

CT: I used to do a lot of mountain biking, and I like all sports cars; I like to drive. I used to have a Nissan 3002X, but my cars are all gone because I have a family. I told my wife someday I’d like to own a Camaro. Someday.

I used to teach hip-hop dance and martial arts, Tae Kwon Do. I studied Ninjutsu, but it didn’t work well for me — it’s too scary — so I didn’t finish that. Tae Kwon Do was more freestyle. I competed a lot and I won nine gold medals. I have so many medals at home.

CT: I don’t have any. I’m not an embarrassed person. If people ask me something, I will tell them [the truth]. That’s the way I am. A lot of people say, “Does this look good on me?” and I say, “No.” When you need the answer to something, I’ll give it to you point blank.

“We eat the same food, pretty much.”

Training: Hands-on. “I kind of learned on the job: I had no skills no education, no nothing.”

What’s on the menu? “We do a lot of noodle dishes: Drunken noodles, curries, pad Thai is very popular. Everything we use here is 110 percent fresh, not from the can. We don’t use any MSG, and we have a lot of gluten free.”