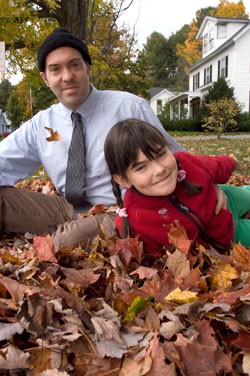 Ross Gagnon, who grew up in Montpelier, decided to go to culinary school after realizing that he loved making dough. Not the kind that helps you pay for your degree, but the kind you top with meat and veggies and eat for dinner.

As a 20-year-old living in Seattle, Gagnon recounts, “I was working at this pizza place, and I had never done that sort of work before. I became really interested in the idea of dough rising. I started going back to our apartment and learning different techniques.”

His interest became a passion: “I thought, What better profession than being in the kitchen? I’ll always be able to get a job; I’ll never go hungry,” Gagnon recalls. He bounced around after graduating from NECI in 1995, moving from Tucson, Arizona, to London. But after a stint at a fancy English hotel, Gagnon felt a need to connect with food more directly. “I decided to work on a farm,” he says.

He landed a plum position back in Vermont at Shelburne Farms, helping the nonprofit churn out its award-winning cheddars. In his four years there, “I was [seeing the process] from beginning to end and understanding the whole idea of a food system,” Gagnon notes.

Later, his way with whey helped him land a job at Artisanal, one the country’s premier cheese shops, where he tended a wide array of fromages: “I just jumped right into it, and I loved it,” Gagnon says.

Four years ago, when he and his family decided to return to Vermont again, he applied for a job as the Head Chef at The Common Man, owned by Keith and Julia Paxman.

Seven Days got acquainted with Gagnon’s cooking at a recent localvore dinner put on by the resto. That night the chef whipped up a unique palate cleanser consisting of cucumber and tomato sorbets, and local yak braised in Boyden Valley wine until it was fork tender and oozing with flavor. After the enticing meal, we wanted to know more about him, so we put him on the grill . . .

How did your family eat when you were growing up?

It was really important that my family . . . ate together at the table every night.

My mom was very much a whole-foods-type cook: She made everything from scratch. She did a phenomenal shepherd’s pie; she made really great stuffed peppers. I remember hanging out with her when she was cooking and watching her cook.

My dad would get involved sometimes, and he would cook sausage and onions. The other thing that was kind of neat was my dad was a duck hunter. I remember sitting in the mudroom with my dad and plucking the ducks’ feathers and pulling the gizzards out, and cooking and eating them with the buckshot still in there.

We get so involved in the supermarket culture, we kind of lose track a little bit about how things really are done. People look at you cross-eyed if you say that you’re a hunter. There are a lot of people who don’t like it.

Back then, were there any foods you just detested?

I can honestly say no. I liked vegetables; there was no problem with that.

The one food I’m not totally crazy about is tongue. There’s something [weird] about eating a tongue, and tasting it with my own tongue.

Do you know the great romantic story about Roquefort? There was a very good shepherd, and he fell madly in love with this beautiful woman.

He went on a trip with the sheep, and when he came back, he discovered that she no longer loved him. He was heartbroken.

He had a little bit of cheese that he’d left in a cave for a period of time. The cheese had a green mold on it, and it seemed like something that might hurt him. He decided it wasn’t worth living anymore, and he took a bite of the cheese. The [Roquefort] rejuvenated his spirit, and he lived happily ever after.

Oh, jeez. I think a fish eye. That was kind of strange.

I’ve got a good story about an incredibly weird experience with beef heart. I was at a slaughterhouse in Cologne, Germany. [The owner’s] big claim to fame is doing warm-meat butchery: slaughtering the animals and processing them right there, and getting the charcuterie going on the same premises.

I woke up in the morning and went out and got my spirit together a little to go watch this. You have to brace your mind; it’s a pretty intense thing.

They were doing a couple of beef and 12 pigs, and this beef was killed, and they went through the whole process. Later, maybe five hours after that . . . I tried freshly slaughtered, puréed beef heart.

To taste it, to experience what it would be before it was turned into sausage — that was an interesting flavor experience. You have to put it into context: You see this huge animal alive, we slaughter it, and all of a sudden I’m eating its heart raw. It’s a very intense experience.

When you have time to cook at home, what do you make?

I’ll make eggs Benedict. It’s something really nice that [my wife and daughter] like that they’re not always going to make by themselves.

My wife is a really good cook, and I’m only home for dinner two days a week, so she does most of that.

What foods are always in your pantry?

My pantry is very “New England-esque,” or “Vermont-esque.” It’s really basic, homespun comfort food. Cheese is important. That’s something we always have, and we get lots of different ones.

We have stocks that I’ve made and we’ve frozen. And a lot of local produce like apples, potatoes, onions. Basic things.

There are fancy things that you can buy that sound really sexy for your pantry, but having good-quality basic staples — flour, sugar, salt, butter — [is important].

Imagine you have an all-expenses-paid trip to any country you want to eat in. Where do you go?

I’d either go to Peru or Japan. Peru because my pastry chef is getting married to a girl from Lima, and he has gone down there a bunch of times and has brought back a lot of the food stories. It’s very different from anything I’ve ever experienced.

In Japan I’d go to the fish market and experience things I’ve never had.

You can cook for anybody, alive or dead. Whom do you choose, and what would you make?

It would have to be my two grandfathers that I never knew — they died before I was born.

I would get to know my grandfathers, and then I would take them shopping with me and talk to them about what kind of foods they liked to eat when they were alive, and I would cook with them, and it would be a real bonding experience, and then we’d have dinner and I could really enjoy them.

I was teaching somebody how to make a foie gras terrine. I had two lobes of foie that I was using. I explained pulling the veins out, the salting process, and then I said, “Now we’re gonna put it in the oven.”

Something came up that was kind of serious that I had to attend to, and when I came back to check on the terrine, [it had melted and] I had a very nice foie gras fat. That sucked.

Is there a quirky piece of equipment you can’t live without?

I use this mini-chinois for sauces a lot, and for clarifying butter for cooking.

The other thing[s], I guess, are our large, stainless-steel spoons; not giant spoons, but twice the size of regular soup spoons. I use my palette knife as much as I use my tongs.

Which cookbooks should every home cook own?

I think one of my favorite cookbooks is White Heat by Marco Pierre White. That’s a cool cookbook for a home cook who’s interested in restaurants.

La Technique by Jacques Pepin is something I remember getting: The pictorials are a very good guide.

If you had your own culinary TV show, what would it be about?

Vermont is such a melting pot of different people. I’d like to organize it so I could go to somebody’s house and talk to them about an old family recipe — the history and what it means to them, and about the people who created the recipe.

I’d be doing a piece on the family and how Vermont was — “Vermont Food Stories.” That would be really neat. I’d love to watch that. It would be very homespun.

If you weren’t a chef, what would your job be?

A cheesemaker. You know how you have muscle memory of something? It’s something I’ve done and I love. It’s part of me, and it’s very dear to my heart.

What does Vermont’s food scene lack?

Name a local restaurant that you patronize.

My wife really likes Tex-Mex stuff, so occasionally we go to El Sol in Barre.

There’s a woman there whose grandmother was from Mexico, and she cooks all of the food herself and takes the care to do it nicely. It’s very basic, but it’s an easy, comfortable time. We kick back.

I love the fact that Barre is starting to have a rejuvenation, and I like supporting that. I think it’s important for people to go out and support different places.

Name a few local products you eat at home.

It depends on the day. We have stuff from Hartshorn Farm and Gaylord Farm — those are two businesses I care about.

One thing that we really enjoy is Butterworks Farm yogurt, just plain Jersey.

What is something that every restaurant patron should know but doesn’t?

Tipping is something that some people don’t understand, and it’s an important thing.

The other thing I think is important about our restaurant is that we love it when somebody says, “Just go ahead and cook for me. Give me three courses of things you think I would like.” That’s what makes my job exciting.

It’s an intimate thing to cook for somebody — I’m not talking sexually, I’m talking spiritually. I’m going to give you something to put in your mouth and swallow. It’s an important thing. It makes life worth living in a lot of ways.

What are your hobbies?

We have a studio in the house, and my daughter and I do a lot of drawing, painting and mixed-media kind of stuff.

During the non-icy months I love to go sailing with my father.

Do you have a favorite guilty pleasure?

[On my birthday] I got home, and I noticed a container of Fluff on the counter. I was like, “You know what? It’s my birthday, and I’m gonna have a peanut butter and Fluff sandwich.

That would be a guilty pleasure, and I have it, like, once a year.