Grilling the Chef: Sean Richards Puts His Spin on a Reopened ArtsRiot

Fans of the South End Truck Stop may be wondering whether it will return this summer. The popular gathering behind restaurant and event venue ArtsRiot — which changed hands last year — drew hundreds of hungry patrons for years before it went on hiatus in 2020. Its reopening date hasn't been set, new ArtsRiot owner Alan Newman said. But after a basket of Sean Richards' saag paneer poutine or some housemade Doritos, devotees may be thinking, What Truck Stop?

Richards is ArtsRiot's new chef, and his background is as eclectic as the restaurant's menu. While attending the New England Culinary Institute, the Fair Haven native spent Sundays learning to be a line cook at NECI Commons on Church Street. After graduating in 2003, he traveled to work at ski mountains in the winters and on Nantucket in the summers.

"Then I decided I needed to get serious about it," Richards told Seven Days on a recent Wednesday afternoon, basking in the sun at a brightly painted picnic table on the ArtsRiot deck. He landed at Blackberry Farm, a luxury resort in Tennessee's Great Smoky Mountains that draws some of the world's best chefs.

"José Andrés would come for a weekend, and we got to work with two guys from El Bulli," Richards recalled. "Thomas Keller and his chef de cuisine came in for a weekend and yelled at us and told us what a terrible job we were doing."

Working alongside those chefs — whether or not they were yelling — was a formative experience for Richards, as was building menus on farm-fresh ingredients.

"They want to learn stuff, and they don't want to get screamed at." Sean Richards tweet this

His next phase involved traversing 47 states while cooking on tour buses for roadies and musicians, including the Eagles, Taylor Swift and Kings of Leon. After five years of travel, he headed back to Tennessee, where he opened the farm-to-table restaurant Knox Mason with a friend in 2012.

A divorce and the desire to be close to loved ones inspired Richards' return to Vermont, where he helped open the South End location of City Market, Onion River Co-op in 2017. He left that gig to cook at Philo Ridge Farm, where he helped develop creative ways to use its abundant vegetable harvests during the short growing season.

"It's a lot of responsibility to figure out how to get people to eat Japanese turnips," Richards said with a chuckle.

Before the pandemic, he left Philo Ridge Farm to work weddings at the Inn at Round Barn Farm in Waitsfield. There, he expected to achieve a better work-life balance, he said, but the pandemic created new challenges. The venue switched to serving family-style meals for the community and ran a pop-up fish shack with high-end lobster rolls. "But, like everybody, I got sick of putting stuff in to-go boxes," Richards said. 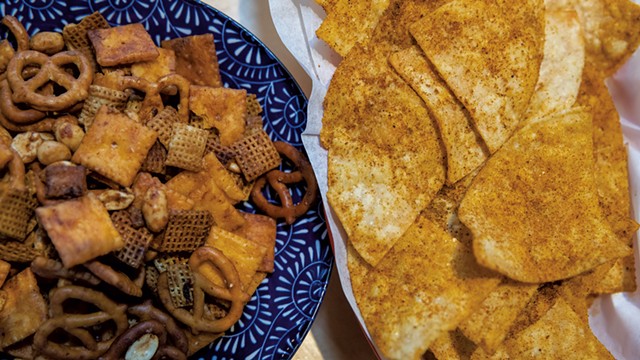 The timeline of ArtsRiot's partial reopening — which aligned with the state's reopening this spring — worked well for Richards. The restaurant opened for outdoor dining on a fancy new deck on May 29, slightly less than a year after Newman purchased it. The building's interior, including a future distillery, remains under construction. The target for full opening is August, Newman said, barring supply chain delays.

In the meantime, Richards is serving up damn good food on the deck. He was more than ready to return to the Burlington scene.

"It's been a long time since I've cooked for my friends and people my age," he said. "ArtsRiot is really a culmination of all my experiences: music venue, cooking for artists, travel and a love for street food from all over, and working in the farm-to-table stuff. It just seemed like the right opportunity."

Richards talked with Seven Days about putting a new spin on ArtsRiot's legacy, his Chex mix and what he'd sell from a food truck.

SEVEN DAYS: How do you make your mark on the menu at a place like ArtsRiot, which had some pretty well-known, beloved dishes?

SEAN RICHARDS: Everybody keeps asking me about the 400 Burger, and we just decided that it's not something we're gonna do. But I think the menu is ArtsRiot-y. It's in the same vein — a little off-the-wall but also Burlington-y and not something you're going to get everywhere.

SD: The menu has an overarching "international street food" theme. What does that mean to you?

SR: [ArtsRiot sous chef Vincent Resh] and I were working on saag paneer poutine today. I don't know where we came up with that. I love saag paneer, but I don't really like the cheese. I was thinking cheese curds would be a good substitute. We had fries, and I like poutine, but it can be too heavy. So I was thinking of a lighter way; it's taking international flavors and plugging them into dishes that people can understand.

SD: There's almost an irreverence to something like saag paneer poutine. Are you worried about getting canceled for cultural appropriation?

SR: I mean, that's definitely a question I thought about when I took the job. You know what I think? Just do it respectfully. And do it in a way that's thoughtful, while still having fun. 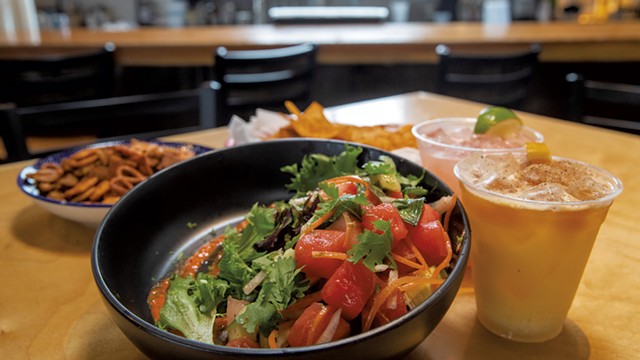 SD: Will we see any of your Southern cooking?

SR: Brunch has a little bit of Southern influence, and we're probably going to push that. Alan wants to do jazz brunch on Sunday, and I think we're going to do that with shrimp and grits and some beignets.

SD: Right now you're only serving on the deck. How does that affect what you're cooking?

SR: We haven't quite fully switched to plates yet. We're still making sure dishes are going to be good to-go and good here. It's about what people are ready for, and I think that's hard to judge. ArtsRiot is known as a bar and venue, so we tried to have stuff that will service that. We've been selling a lot of shared stuff — the Doritos with salsa. I love those and have been eating way too many of them.

SD: Speaking of snacks, I can't stop thinking about the chile-lime Chex mix. What makes Chex mix a good vehicle for flavor?

SR: For me, foods are texture, and it's a lot of different textures in there. It's almost too salty, a little too sweet. It just keeps you coming back. I have to keep it away from Alan; every time he comes in he scoops himself some Chex mix.

SD: Does your Chex mix contain the controversial rye chip?

SR: No rye chip! But we put corn nuts in it for that extra crunch.

SD: You're starting fresh here with a new staff. How are you thinking about your role as chef and kitchen manager?

SR: Screaming and yelling and throwing things is how I came up — you were expected to put up with that. And I think that pushes a lot of really good people out of the business. It's my job now to model the right behavior and be like, "No, we're not going to tell that dirty joke in the kitchen."

Honestly, when I was at Philo Ridge, I had a lot going on, and I didn't have the time to connect with my staff as well as I wanted. I think what chefs need to do — not even going into a tight labor market — is focus on developing people. That's the part I love most. As people struggle to hire right now, cooks are looking for places that are going to help them grow. They want to learn stuff, and they don't want to get screamed at. That's not to say that I'm lax on everybody, but I'm trying to create an environment that people want to spend 50 hours a week in.

SD: How often are people asking you about the Truck Stop?

SD: If you had a food truck that only served one thing, what would it be?

SR: I had an idea years ago, and it's a dish that's on the menu now: the smoked brisket French dip. We make old-school French beef jus from scratch, then we infuse it with some lemongrass, soy and a little chile. We serve [the slow-cooked and smoked brisket] with a little Cabot cheddar and some caramelized onions on a Stewart's roll. I was gonna set up a food truck outside of the Tennessee Titans stadium and sell those.

SD: This is a question we always ask, but it seems extra relevant since you toured with bands. What do you listen to when you cook?

SR: We've been listening to a lot of Sturgill Simpson, a lot of country — new country. But I'll listen to whatever. When I lived in Nashville and was cooking for bands, I was always going to concerts. That's something I miss, and I'm excited to be more involved in the local music scene when we open back up.

SD: Do you see overlaps in food and music?

SR: You know, I'm never one to [say] that cooking is an art. I'm a technician. Nobody wakes up and cooks a perfect chicken one morning — that takes years of practice. A lot of the musicians I met are like that. When I worked for Keith Urban, he would play the same song over and over again in rehearsal, until his fingers were bleeding. You've got to work at it to be a great musician, and I feel the same way about being a chef.

ArtsRiot is currently open for outdoor dining Thursday through Sunday at 400 Pine St. in Burlington. Learn more at artsriot.com.