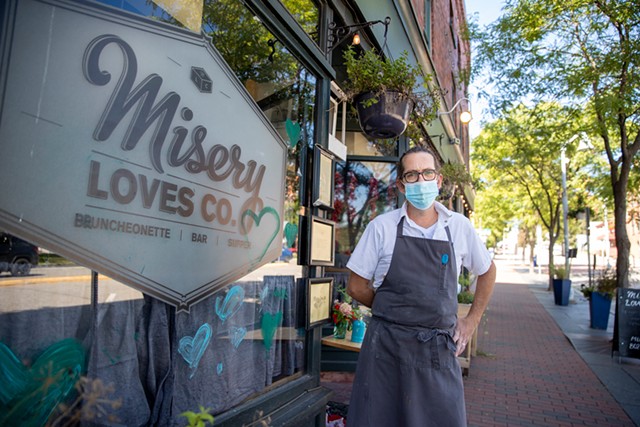 In the summer of 2012, Misery Loves Co. was a food truck that served sandwiches, including the Rough Francis (fried chicken with hot sauce and blue cheese), salted cod with piperade, and PB&J (pork belly and tomato jam).

This summer, the restaurant is offering the same sandwiches, plus a changing array of other items. From a bag of local greens to a quart of eat-'em-hot French fries, MLC's food is available for pickup outside the Winooski eatery that Misery's owners opened in November 2012, following their food-truck summer.

Online orders can be picked up on Friday and Saturday; Misery Loves Co. will expand its hours in October, Josinsky said. (Chef and founding partner Nate Wade, Laura's brother, moved out of state and is no longer an MLC owner, according to Josinsky.)

The other day, as he shoveled charcoal, charred peppers and smoked bacon, Josinsky talked with Seven Days by phone. The conversation touched on the future of restaurants and the songs of Harry Nilsson.

SEVEN DAYS: Misery Loves Co. turned out to be a prescient name: Misery is on the rise, and company is restricted. Have you thought about the restaurant's name and its meaning in the time of COVID-19?

AARON JOSINSKY: When we first opened back up in early June, what we wanted to do was serve things that we like and that we like to make, that people could take home to their families. That's always been the important thing to us: sharing what we like.

In BC [before-COVID] times, we wanted people to be able to come in and [experience] the suspension of disbelief — to just get away from their daily-life strife and enjoy themselves with friends and family.

When we opened back up, we weren't going to have anybody inside. We wanted to be able to share food that we enjoy producing that could be reheated at home — [with] a similar sentiment, but at home. I guess in these miserable times, finding joy and comfort with your pod, as it were, is what we're interested in doing.

SD: How are you changing and shaping your menu for takeout?

AJ: It's our third week offering hot food in addition to our store items, and the hot food is very simple. We're doing French fries and fried chicken, and we're doing three to four sandwiches a day. We're giving people what we think they want.

We are taking an incremental approach to this whole process of reopening. At first it was just a [digital] store, and you could purchase things: dry goods, or things you could heat up later. Now we have hot food in addition to the store, and we're doing a little catering. It's kind of like the [Gov.] Phil Scott "spigot." We're just kind of turning it a little bit at a time.

SD: The open kitchen and up-close seating at the bar were defining features of Misery. What's it like to cook without people watching and talking to you while you work?

AJ: The open kitchen was really wonderful. Even folks that didn't sit at the kitchen counter, they would walk into the front door, they'd see you, [and] we were on display. They could see the mise en place going into a pan or onto the grill; that was really special.

"In a different reality, I hope we can have people come back into that space." Aaron Josinsky tweet this

For the folks who did sit at the kitchen counter, there were many wonderful conversations. I think there was a lot of education both ways: to the guest and from the guest. We learned a lot about people who really felt that was their seat.

Now it's full of PPE and various arrays of our to-go arsenal. It was a special part of the space. We were really lucky to have that. And in a different reality, I hope we can have people come back into that space.

SD: You sometimes played entire albums during service. Has the music changed without diners? What are you listening to these days in the restaurant?

AJ: We still play lots of whole albums. It's important to us, the music. Actually, we're going to buy a record player so we can do it in a different way. We still make playlists and change it up.

We're doing more genre themes. We did show tunes the other day. Sometimes we just listen to Igor Stravinsky for no reason. Lots of Harry Nilsson, Phil Spector-produced records. Do a deep dive [on Nilsson]; he's wonderful.

SD: You've said in the past you think the restaurant industry needs a "new paradigm." This looks like a chance to build one. What do you think it should look like?

AJ: I'm still working on it. I don't know. We love serving people; we love making food that people can enjoy. I would like to be a part of that.

I don't know what the future holds for restaurants. I feel like it's going to be a wait-and-see thing. If there's anything that early COVID taught us, [it's that] making all the meals and having to clean up all the meals is a lot for a modern person.

I don't know what the future holds for us here. I'd like to hang on. I really appreciate everybody who is supporting us. I think it's really important to be hyper-local right now and support people, whatever industry it might be.

When I was talking about the paradigm shift, I hadn't thought about a pandemic.

SD: How do you time the French fries for curbside pickup?

AJ: When people order online, they call when they get here. We're trying to wait to drop the French fries until they call. So you can eat them in the car or go to the park across the street.

SD: If you and your family could hop in the Winnebago that was the original iteration of Misery Loves Co., turn the key and drive away, where would you go and what would you eat?

AJ: We would probably try to see the parks of America before they don't exist anymore; just go on a big road trip to all the national parks, because I don't know how much longer they're going to be around.

Before we all became homogenous, people ate differently, they spoke differently, they dressed differently. There used to be regional food. Whenever I'm in a new place, I always try to find that regional cuisine. That's really important to me. I'd eat whatever was good, authentic. It's harder to find these days, though.