Grilling the Chef: Justin Bigelow of the Daily Planet 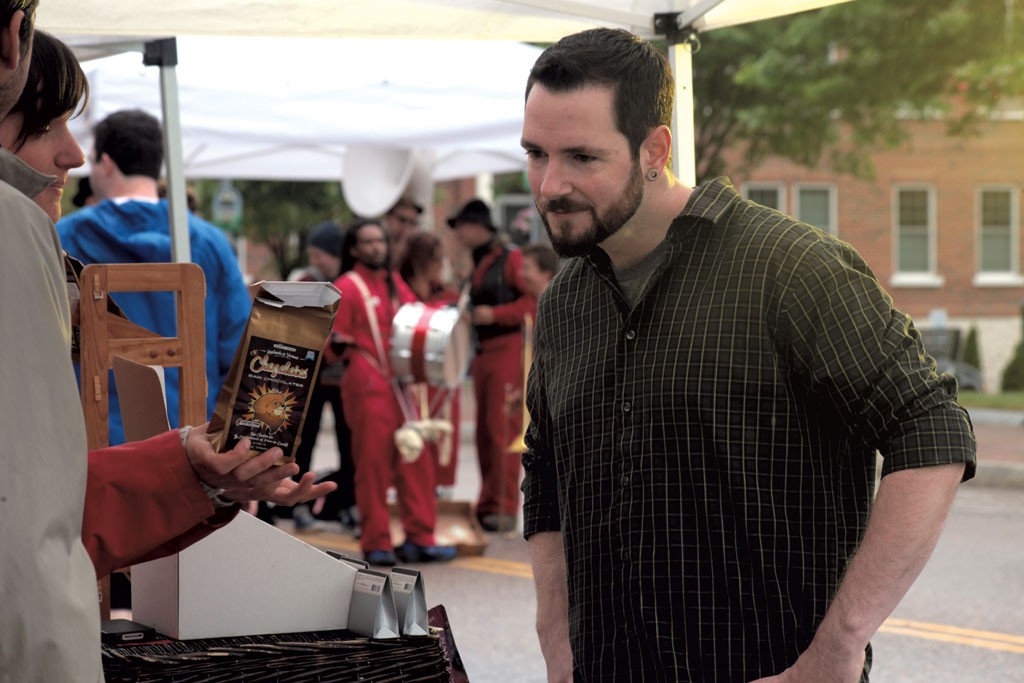 "I want to show you something," says Justin Bigelow, chatting with a reporter in the Daily Planet dining room last week. The chef — who took over that restaurant's kitchen last fall — pulls a slip of paper from his wallet and slides it across the table. "Just to sort of give you an idea, to get behind my mentality," he says.

Dated January 4, 2012, it's an email from a restaurant where Bigelow once staged: "The team appreciated your knife skills and enjoyed your soup," it reads. "Unfortunately they felt that you still needed to develop your creative culinary skills and at this time we need to hire a person with a strong creative side. We wish you the best in your job hunt."

The chef rereads the note often as a reminder to cook what he wants. "I felt like that was a job I could do with my eyes closed," he recalls. "But it was just so eye-opening for me. I was just trying to do exactly what they wanted me to do: put this together, put that together, like I'm going to do what I'm told. And that's where it led me!" So Bigelow threw the rule book out the window and never looked back.

Soon after, he landed a job at Mombo Restaurant, an innovative fine-dining spot in Portsmouth, N.H., where he worked his way up from sous chef to chef de cuisine, before moving to Burlington in September to remake the Daily Planet.

Bigelow tossed out the DP's old menu and started from scratch. He swapped the Planet's predictable bistro fare with dishes such as lamb rib "lollipops" sided with wild mushroom ragout, maple-cured confit chicken with waffle and watercress panzanella, and saffron whitefish arancini with roasted jalapeño jelly.

In April, Bigelow created a Dr. Seuss-themed Vermont Restaurant Week menu complete with cotton-candy cocktails and dishes spiked with everything from pop rocks to wasabi tobiko. "That was by far my best week ever in my career," he says. "The staff was happy ... I would walk out through the dining room and people were just laughing ... It was like everyone's childhood just came back to them, and it was such a good feeling."

Fun is good, but Bigelow is definitely not messing around. The playful cooking belies a serious mission to keep learning and improving — and throwing culinary curveballs. Seven Days talked to Bigelow about past hardships, local ingredients and cheap Chinese food.

JUSTIN BIGELOW: The best we could. I grew up with a single mom, two sisters and then another one that came much later. So it was a struggle to get food on the table, but [my mom] did some really good stuff. There's a dish I still make now — it was boxed mac and cheese with hamburger and a can of corn. I look back on how creatively she did things and how she made something from nothing — that's my favorite thing about cooking. I do these "Chopped" challenges with a group of friends. They'll come up with mystery ingredients, and I have an hour to cook, and we just go. I love things like that.

SD: What ingredients have been inspiring you lately?

JB: Recently I got, like, 15 pounds of fiddleheads, so I was doing lots of fun stuff with those. That's not something that really came around in New Hampshire, so that was awesome. I made a soup last weekend, and it sold really well. We had the foraged fiddleheads and some morels and oyster mushrooms. I made a fiddlehead and watercress soup and some morel crème and garnished it with roasted oyster mushrooms. It's fun to be in spring.

SD: How does access to so many fresh, seasonal ingredients influence your cooking?

JB: I bring the ingredients in first and then figure out what I'm going to do with them later. I draw inspiration from everywhere. Last weekend I ordered some soft-shell crabs and had no idea what I was going to do with them. I went to City Market and walked around for a little while to figure it out. It was sort of inspired by a Peking duck setup, where you have the duck and the scallion pancakes or whatever, and I did this red chili dragon sauce and wasabi-daikon slaw. We had this little scallion brush to paint on [the sauce], and it was just fun. Right now that's my thing. Just fun.

SD: When you first arrived, you were so excited to make a splash. Have you been able to fulfill that ambition?

JB: Definitely. I think more so during and since Restaurant Week. I was starting to feel that whatever point I was trying to make wasn't going over so smoothly with the community. I didn't feel like I had the connection I was going for until Restaurant Week. Now I'm excited again.

SD: If you could have any chef in the world prepare a meal for you, who would it be?

JB: Oh, boy. I think the obvious answer would be Thomas Keller. He's inspired everybody, so that would be interesting. Or David Chang. I've always wanted to go to Momofuku.

SD: If someone like David Chang or Thomas Keller came to your restaurant, what would you cook for them?

JB: Oh, God! I think I'd probably have to just keep it really simple. Simple, awesome flavors. Lots of local ingredients to really showcase what Vermont has to offer, rather than try to blow him away with something he's never seen before. That would be tricky.

JB: I just tasted the pork shoulder. We have a pork ramen on the menu. I roast the pork for 24 hours and it gets shellacked with brown sugar and Sriracha and served over fresh-frozen noodles from New York.

JB: I did a swordfish dish once at Mombo, and it drove me crazy. The presentation was just so wrong, and the flavors weren't quite right. It was supposed to be a take on an au poivre, but I was trying to mix it up. I was confident in the idea, so we printed the menus [with the dish on them], but ended up 86ing it for, like, three nights in a row because we weren't happy with it.

SD: What do you cook at home?

JB: I cook on my day off for the whole week — breakfast and dinner. The Crock-Pot is my best friend. I've been making egg muffins, kind of like a crustless quiche. I do a lot of chilis and curries — really easy one-pot meals that last the week. Unless I'm cooking for other people, then I get crazy.

SD: What's in your pantry?

JB: Peanut butter is my favorite thing in the world.

JB: The Joy of Cooking is an awesome book. I also have this book from America's Test Kitchen. It's a compilation of their tested recipes from throughout the years, and it's just an amazing book. Modernist Cuisine is another one I really like. It's not something I get into all that much, mostly because we don't have a lot of the equipment, but I definitely draw inspiration from that book a lot.

SD: Any techniques you're experimenting with right now?

JB: Yeah! I bought a smoking gun ... We did the pop rocks, and I've been playing around with caviar pearls and foams and things. I needed to get everything stable before I started playing around too much; finding good help has been tough. But we're set right now. I don't know how it all worked out, but it's really good.

JB: Water? I love water. Shed Mountain Ale is probably my favorite beer ever. I had it my first night here, and I've been addicted ever since. I don't drink a lot, but it's just a great beer. People are so crazy over Heady Topper, but I'm more of a chew-your-beer kind of guy. I like stouts and porters and things like that.

SD: What's one food you couldn't live without?

JB: I remember the first time I had pad Thai; I couldn't believe how many flavors could exist in one dish. It sort of inspired a lot of my cooking style — to try and pack as much flavor as I could into everything. And that's sort of what I compare a lot of dishes to. A burger would be another one. A good burger is just life-changing. I could go anywhere and be thinking burger — with mushrooms and onions and cheddar or American cheese. Nothing too crazy.

SD: What is the strangest thing about American food habits?

JB: Sugar. Sugar's ridiculous. I don't eat sugar at all. I make exceptions every now and again — like with Chinese food — but I did the 10-day Fed Up Challenge a while back and went 10 days without sugar and felt amazing. So I've basically just canceled it out of my diet. Most of what I eat is whole foods — that's why I make myself breakfast and dinner for the week: so I can control what I'm eating.

JB: I love cheap Chinese food, just all of it. It's so bad, but it's just so good.