Grilling the Chef: John Patterson Goes Country at the Inn at Shelburne Farms 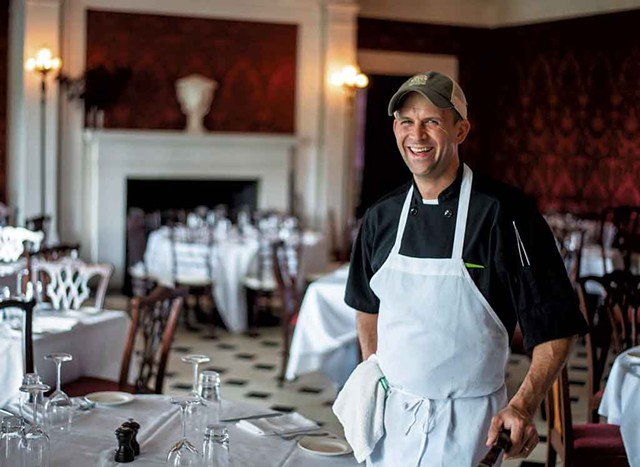 A couple of weeks ago, Shelburne Farms' new executive chef, John Patterson, spent two days away from the restaurant meeting with educators and school cafeteria staff in Middlebury. Such a practice is far from standard for a new chef at the height of his first season; it made very clear to Patterson that his latest gig is different.

The chef started his professional cooking career at Blackfish, one of Philadelphia's small, innovative BYOB establishments. He worked his way up the kitchen chain of command at critically acclaimed restaurants such as Fork in Philadelphia, Gramercy Tavern in New York City and Talula's Table in Chester County, Pa. The last one was once dubbed "America's toughest reservation" by NPR.

At the Inn at Shelburne Farms, Patterson revels in peak-season tomatoes grown less than a mile from his kitchen and beef and lamb raised so close "I can go pet it," he said. While the chef relishes the opportunity to create a "hyper-local, hyper-seasonal" menu, he also recognizes that the restaurant operates in service to nonprofit Shelburne Farms' broader mission of sustainability education.

Patterson talked with Seven Days about downshifting from the intensity of big-city restaurants, cooking with tomato leaves and why "crap" bread is crucial to a good sandwich. 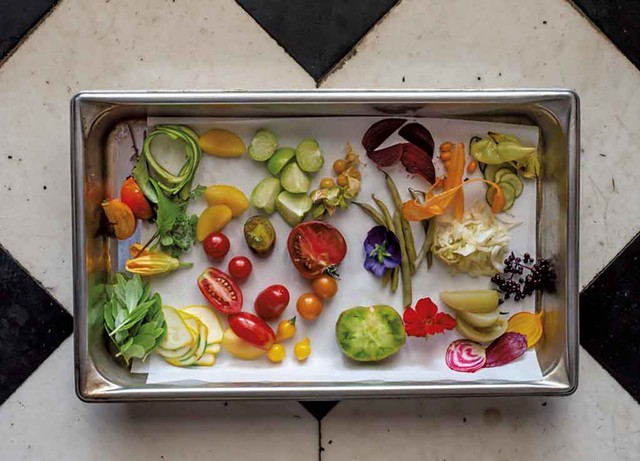 SEVEN DAYS: You're a Philly native and devoted Flyers fan, I hear. How did you land in a state that lacks a major professional sports team?

JOHN PATTERSON: I was looking for my next opportunity, somewhere that was a little more education focused. I wanted to be able to give back.

My wife actually found the job listing, and my response was "But it's in Vermont..." I had never been to Vermont; I knew nothing about Vermont. I knew there was maple syrup and Phish was from Burlington, and that was the extent of my knowledge.

We drove up in March. When we left Philadelphia, it was 72 degrees, and when we got up here, I think it was 39. But you step onto Shelburne Farms, and it sort of takes your breath away. Then you meet the folks who work here, and you talk to them about why they work here. It was everything I was looking for and, honestly, didn't even know.

SD: What or who influenced you to pursue a culinary career?

My high school guidance counselor actually suggested I go to culinary school, but my mom said, "Absolutely not." I bounced around, it seemed like, every college in suburban Philadelphia for years, trying to find what I wanted to do. I should have had two doctorates by the time I got out, and I didn't even have a degree.

That whole time, I was working in restaurants and watching "Great Chefs of the World" on the Discovery Channel. I would come home and spend some of the money I had made trying to replicate the dishes, to stunning failure.

During that time, I kept receiving in the mail all these brochures for culinary schools. It turned out my mom had signed me up. One Sunday, my dad called and said, "There's an open house at this culinary school. Do you want to go take a look?" The Eagles weren't playing that Sunday, so we went, and I absolutely loved it.

It had the learning aspect, the creative aspect, and, at the end of the day, I really liked making people happy, and that's why I've continued in the restaurant industry.

SD: Do you have a comfort food from childhood?

JP: Mashed potatoes made by my grandmother. I did not grow up in a food-focused household. Cooking green vegetables was not a strong point. It wasn't until I got into the restaurant business that I realized asparagus was supposed to have some texture to it. My grandmother would cook asparagus to the point where you would touch it with a fork and it would just implode.

SD: When you were interviewed about taking on the job at Fork in Philadelphia, you mentioned being attracted by the intensity of the kitchen. We like to think we're a little more laid-back here in Vermont. How has the shift been?

JP: It has been honestly a little bit of a challenge. As much as I wanted to pull back, after so many years, it's an adjustment period. It feels less intense because the primary goals of the restaurant are not the same. The goals here are also community and education focused. You're not trying to compete with the restaurants in NYC and [on] the James Beard [Foundation Award] list.

The primary purpose of the Inn is to support the other functions of the farm, because we're a nonprofit. The entire property, whether it's the Farm Barn, the cheesemaking — it's all tied in. At the end of the day, we want people to sit and relax, have a great meal, and really see that the products from the farm represent what we do here.

That being said, once the [orders] start rolling in, the heat and pressure kick in, and there's still that adrenaline rush. 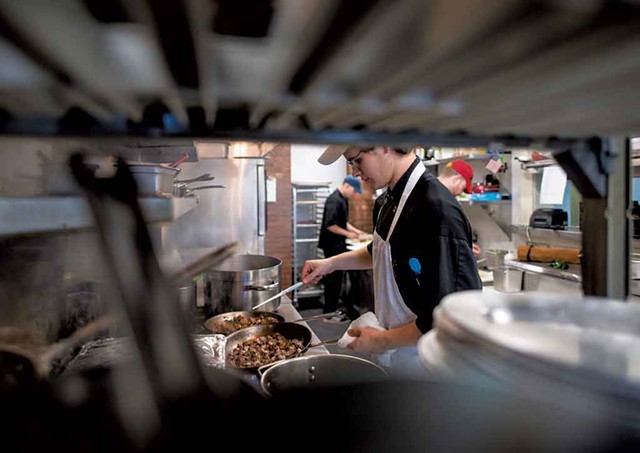 SD: At the recent Vermont Fresh Network Annual Forum Dinner held at Shelburne Farms, the Inn received the 2019 best bite award for beet-tomato tartare and blue corn pancakes. How did that recipe come together?

JP: The corn pancake was Jim [McCarthy, the Inn's executive chef emeritus], and I was the beet tartare. I wanted to utilize the things we had on the farm. We had plenty of beets, and we had tomatoes, and they're really at their peak. For gluten-free, we did a tomato-leaf rice crisp based on the tomato-leaf pasta we're doing, where I use leaf prunings blanched and puréed for the liquid in the dough.

SD: Do you have one tip for home cooks?

JP: Use more salt. And rest any protein from the oven. If I can put my hand over it and it doesn't make my hand feel like it's going to sweat, then it's cool enough to slice.

SD: A lot of locals don't make it out to the Inn to eat. What would you say to encourage them to come?

JP: Given the stateliness of the grounds, it's an uphill battle. It isn't just a place to come and celebrate. Stop in, take a look, have a drink, order an appetizer. We're here to take care of people; we're here to feed people.

SD: Do you ever go play with the lambs and goats at the Farm Barn?

JP: I haven't yet. That was one of my goals, certainly in the off-season. I did not grow up in an agricultural area. I've spent a couple days down in the Market Garden with Josh [Carter, market gardener]. Picking asparagus blew my mind. He must have thought I was insane.

SD: Plans for November through April, when the Inn is closed?

JP: This is the first time in 15 years that I haven't had a year-round cooking job. I'm looking at it as an exciting opportunity. At the same time, there's an uncertainty, and I'm getting anxious.

I know I'll be visiting local schools to see their dining programs and how I can be of help. I know that helping around the farm is a big part. Closer to Christmas, I'll be helping with cheese orders.

And I'm going to look at logistics for next year: kitchen layout, staffing. It's a challenge to build a seasonal staff. I'm going to be doing quite a bit of recruiting. I want to start an extern program through Johnson & Wales [University] and CIA [Culinary Institute of America] and, hopefully, NECI [New England Culinary Institute].

JP: I would say roast pork with sharp provolone and broccoli raab. Cheesesteaks are always better in the suburbs. In Philly, they're a tourist trap. I recommend Dalessandro's in Roxborough.

The whole reason the sandwiches are good down there is the bread. It's crap bread. It's squishy, no real flavor. The bread is just the vehicle. I can't find a good sandwich up here because the bread is too good. [Laughs]

JP: I just had my first creemee yesterday, a maple creemee. It was pretty good, though I'm really a chunks guy. Ben & Jerry's — I love it.

But the quality of the dairy up here is so much better than any that I'd had. I mean the plethora of cheese. I went to the [Vermont Cheesemakers] Festival. That was incredible. I got to taste tons of cheese.

The Inn at Shelburne Farms, 1611 Harbor Road, Shelburne, 985-8498, shelburnefarms.org. The seasonal dining room is open through the morning of October 21.