Grilling the Chef: Colleen Mahony at the Warren Store 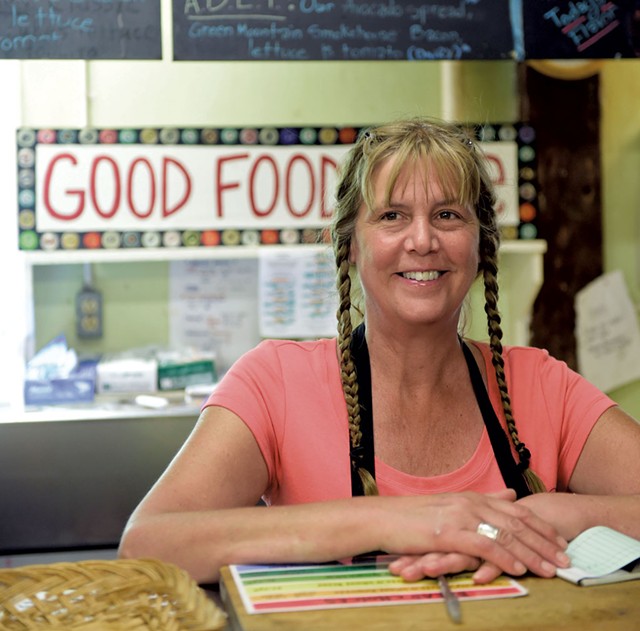 Last week, as Colleen Mahony anticipated a weather forecast of scorching heat — mid-90s in the Mad River Valley to start July — she gazed with appreciation at Freeman Brook. The water flows, falls and pools beside the Warren Store, where Mahony is food manager. Down a steep embankment out back, the brook forms a private, natural Jacuzzi, an ideal break spot for a worker in a steaming kitchen.

"I advise the kids, 'Bring a bathing suit and jump in,'" Mahony said, referring to her employees. "Because it gets hot."

The brook flows into the Mad River, the north-flowing body of water that gives the region its name. Mahoney moved to the area 25 years ago and fell in love with the people and the landscape.

"It's very earthy," she said. "It's beautiful. I especially love it in winter, cooking breakfast and looking out at the church covered in snow."

But winter is half a year away. This week, Warren celebrates Independence Day with its traditional float-filled parade. The theme is "Happy Birthday to Us," a celebration for the nation, the town and local ski areas that are marking milestone birthdays. (Sugarbush Resort is 60, Mad River Glen 70.)

Mahony will spend the holiday morning making scores of breakfast sandwiches, anticipating a busy summer week at the store where the river flows past. She took a break to talk with Seven Days.

SEVEN DAYS: This year marks the 70th annual July 4 parade in Warren. What do people come to the Warren Store for on the holiday, and what special things will you prepare?

COLLEEN MAHONY: Typically on the fourth, we do a lot of breakfasts — we can do 140 breakfasts on the morning of the parade. We usually limit it to breakfast sandwiches, because we can't do our typical full menu with all those people. We do one sandwich called the Reutzler, named after a guy who's come in here forever. He created it. It's ham, egg, cheese, tomato and mayonnaise.

We also do yogurt parfaits — red, white and blue parfaits. We make our own yogurt here, and the bakery makes granola.

SD: What food is as American as apple pie that isn't apple pie?

CM: I would say hamburgers and hot dogs. I don't eat them a lot, but I do like a nice cheeseburger. I like it on an English muffin with a little mayo, red onion and tomato, a big slab of melted cheddar cheese, and a little barbecue sauce. It is yummy.

SD: What is the ideal picnic from your deli to eat on top of Mount Abe, and what hot lunch specials would you recommend after skiing at Sugarbush?

CM: One of our iconic sandwiches, probably the No. 6, which is roast turkey, lettuce, tomato, onion and cranberry mayo on our bakery's white baguette. You could always grab a broccoli salad or kale Caesar to go with the sandwich, and a key lime pie for dessert.

Chicken and biscuits or shepherd's pie would be a good [meal] after skiing. Or grab a chicken pot pie or Thai curry chicken and head home with a nice bottle of wine from the front of the store.

SD: Name five things you always have in your fridge at home.

SD: What's your morning routine when you get to work?

CM: I get here around 6:30 in the morning. I open up the deli case and flip all the salads into fresh bowls. I make a prep list for the employees to do — everything from stocking lettuce, prepping tomatoes, making hummus, and a huge slicing list. Then I set up for breakfast, and we open at quarter of eight. We have a breakfast menu of build-your-own burritos and specials every day: pancakes, French toast, omelettes.

SD: What's the trick to making food stand out at a general store that draws people for its location and clothing shop?

CM: I don't think it's a trick. It's just good-quality food and locally sourced ingredients. And adding a twist to certain recipes.

SD: Have you noticed a difference between what locals want to eat and what tourists are looking for?

CM: We do see a big difference in that. It's pretty funny — I feel like the locals want to come in and grab meals to go, stuff that they can eat at home. The tourists are more in here to get sandwiches, fast food, to hit the road or whatever. This place gets so crazy in July and August; there are so many things to do in the valley that people just want to grab something quickly and be outside.

SD: When did you develop an interest in cooking?

CM: I guess, honestly, it didn't begin really until I worked here. When I first started here, I wasn't the manager, and it ended up that I was the [kitchen] manager. [Store manager] Jack [Garvin] gave me the freedom to do what I wanted to in the kitchen. And I guess that's pretty much how I grew in my cooking skills, when I was given the opportunity to do that.

I can honestly tell you that when I started working here 13 years ago, I didn't even know how to make a pot of soup. It's really been a blessing to me to work here. I learned by doing it and looking at recipes. It was hands-on and figuring out that you can't get into a three-hour food entrée if it needs to be ready at three o'clock. So I learned by exploring different recipes and seeing what sells and what doesn't sell. And by listening to people's suggestions.

A big part of my job, more so than the cooking part, is the organization and keeping everything going. One little setback and you could start running out of things.

CM: I don't get to see the floats. I'm in the deli. We randomly come out to get a peek. I'll give the employees time to go out, but I usually don't get a chance to go out there. I'm inside keeping up with stuff in the kitchen. After doing 130 breakfasts, I'm getting that all cleaned up and getting ready for lunch.

Speaking of The Warren Store