Grilling the Chef: Charlie Menard, Inn at Round Barn Farm 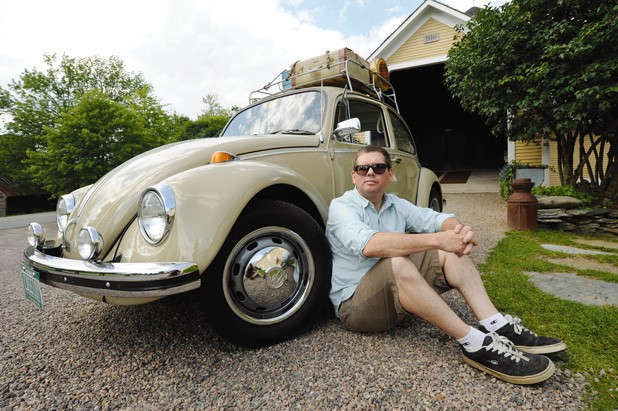 As a high school student in Westford, Charlie Menard was looking forward to the prom, but for him the highlight of the party would be dining at Le Cheval d’Or in Jeffersonville. At the quaint French restaurant, waitstaff in period costume served escargots to the impressionable teen. Menard made it through the dance, but what he really took away from the night was a yen to recreate chef Yves Labbé’s recipe. “I wanted to relive the flavor of that moment,” explains Menard.

Now, as executive chef for Cooking From the Heart, the catering company at the Waitsfield wedding destination the Inn at Round Barn Farm, Menard still occasionally pays homage to the long-gone dishes at the Cheval d’Or, but he’s more often informed by his own career, which has spanned the globe.

From cleaning buckshot out of freshly killed game in Scotland to preparing fish caught by a father-of-the-bride who happened to head a Fortune 500 company, Menard seems to have done it all. But it was just last week that he first appeared on the radar of many Vermont diners.

On August 7, the Vermont Fresh Network announced that Menard had won the prize for Best Bite at its VFN Forum earlier that week. Among dishes from nearly 30 of the state’s top chefs, Menard’s dual offerings of basil-white-chocolate ice cream with almond tuiles; and sweet-corn ice cream with tomato jam, pesto cookie and candied fennel were a clear standout to the foodie attendees.

Most of us would have to attend a private event at the Round Barn to taste Menard’s food, but he does feed guests at several public events each year, including an art show at the Round Barn on September 22 and his annual Souper Bowl, a foodie alternative to the big game in February.

So what else is cooking for Menard? We grilled him to find out.

Charlie Menard: Really simply. My mother and father did not farm, but they grew up on farms; our family has farmed in Vermont for many generations. We always had vegetable gardens at home.

Some of my fondest memories of eating when I was little was just Mom going out and getting a head of lettuce from the garden and making a really simple mayonnaise dressing with salt and pepper. So delicious, so simple, so fresh. You remember that pure flavor forever.

SD: How did you start your career in food?

CM: I grew up in Westford. I was able to get my first job, when I was 15, being a fish cutter for Gérard [Rubaud, now of Gérard’s Bread]. We were doing sous-vide — it was a long time ago, long before anybody had heard of it. We were basically doing all the vacuum packing and [selling fish] at different places. He had a store at Bloomingdale’s in New York City, where they sold our pâtés.

Gérard was such a French guy, he wanted everything to be like it was in France. He was hiring people to grow asparagus and raise meats. If he couldn’t find the farm, he would create it.

He was really driven to create some of the best food anybody had seen in the Northeast, let alone in this small town in Vermont. Gérard brought over top chefs from France at the time, but he had [New England Culinary Institute] interns, too. One young chef, who was older than myself, came from NECI and told me, ‘If you want to cook, you want to go to my school.’

SD: Back then, were there any foods you thought were gross?

CM: I did not like summer squash, and I still don’t today. I was definitely pretty open to trying everything. But I’ve also been kind of not the biggest meat eater. Even now, I rarely have meat in my refrigerator at home. I spent some time in high school as a vegetarian. I was kind of a hippie kid for a while, I guess. I found [that cutting out meat was] another thing to learn about. I went vegan for a little while, too.

CM: The first thing I think of is porchetta. That is number one. I love it. Oh, man. The reason I couldn’t stay vegan was I loved cheese too much. And I love brisket. I love cooking it, I love eating it. I’m not a big steak guy, but I love brisket in any form.

CM: I had some scrambled eggs with Cholula [Hot Sauce].

SD: What foods are always in your pantry?

CM: Rice, usually basmati, jasmine; Cholula; black beans; “00” flour for pizza. I have a pizza oven at home. It was built as part of a class with Yestermorrow. That was really cool. Best thing I ever did for my house.

SD: If you left Vermont, what local products would you miss most?

CM: Vermont beer. It’s really about missing all the variety of all the great craftsmen, basically. Then I would miss the Vermont farmers markets in general. I go to the farmers market every Saturday. I have missed like, three, over 13 years.

SD: You’re trying to impress somebody with your culinary prowess. What do you make?

CM: Corn and sweet-basil ice cream. I like to make tarte Tropézienne. It’s a fun thing to make and a great thing to talk about, and it’s just an amazing balance of sweet and savory and rich.

SD: What’s the dish you’ll be remembered for?

CM: If I were to die right now, it would probably be my ice creams. Maybe the brisket.

CM: You try to black that out.

SD: Describe your best meal ever.

CM: I had a tasting dinner at the Common Man [in Warren] of vegetarian and seafood. That would be tied with one I had recently in Rome at a Michelin-starred place, Metamorfosi.

SD: And your worst.

CM: One thing that happens when you’re a chef, people say, ‘Oh, I’m cooking for a chef.’ But they shouldn’t be nervous. Especially in a home setting. You’re invited to someone’s house and they cook for you — that’s a beautiful, fabulous thing. That’s what we do on a daily basis, and having it returned is beautiful.

But then, [there are times] you go and the food is awful. I can’t name names, of course, and I’m not going to say what the food was. I’ve had a really bad meal like that. I had to work to stomach any of it.

CM: When I was in high school, I swiped a copy of the original New York Times Cookbook by Craig Claiborne, and I still own it. That’s my favorite for sentimental reasons.

At some point, I discovered The Joy of Cooking. As a young, tough-guy cook, I would have said ‘Joy of Cooking? Give that to your mom.’ It’s an amazing resource, so well done and time proven.

On a professional, inspirational level, I’m loving anything out of Québec right now — the Toqué! [: Creators of a new Quebec gastronomy] cookbook, both of [Au Pied de Cochon chef] Martin Picard’s books, The Art of Living According to Joe Beef. Those books are my favorite at the moment.

SD: What are your favorite Vermont restaurants?

CM: The Common Man, absolutely. I would love to be able to get back down to the Inn at Weathersfield. I think [chef] Jason Tostrup is an amazing chef and nice guy. I’ve been known to hit up the Mad Taco.

SD: If money were no object, what kind of restaurant would you open?

CM: I would probably lean towards a gastropub. I love that food, the comforting, casual atmosphere, which I think is so Vermont. The sort of place you don’t have to dress up for, but the food is amazing.

SD: What kind of music do you like to listen to in the kitchen?

CM: Music of choice is Grateful Dead. Though it gets mixed up. Everybody has their own musical tastes. Fortunately, the Grateful Dead is fairly well received.

SD: If you weren’t a chef, what would your job be?

CM: I would love to think that photojournalism would be really cool. I’ve always loved photography. I’ve also always had a pretty big interest in website design.

SD: What are your hobbies?

CM: Taking care of my egg-laying hens is a daily hobby. Foraging. I have an old Volkswagen Beetle that’s kind of a hobby. I don’t know what it is with these cars. People develop an emotional tie.

CM: Subway. I don’t know, what can I say, I do like it. I only get the veggie-cheese because I don’t really have any faith in the meat. It’s not working for me [like Subway diet spokesperson Jared Fogle]. I keep trying to live up to him. In between the pork belly and porchetta and brisket at work, it hasn’t evened out yet.

SD: What do you think is the strangest thing about American food habits?

CM: Honestly, I feel like I’m kind of stuck in this place of Vermont, where I feel like we have really amazing habits. We eat better than the rest of the country, so it’s hard for me to actually say what other people are doing in the rest of the country. Obviously, there’s too much processed food and frozen food, but I live in a place where everybody goes to the farmers market and people love to cook.

Company: Cooking From the Heart catering at the Inn at Round Barn Farm

Cuisine type: Seasonal and local that depends on the whims of the families that hire Cooking From the Heart. “We try to really not get into a mold here,” says Menard.

What’s on the menu? Popular dishes include house-smoked salmon over pea and mint soup with preserved lemon, and crème fraîche, charcuterie and homemade ice cream.