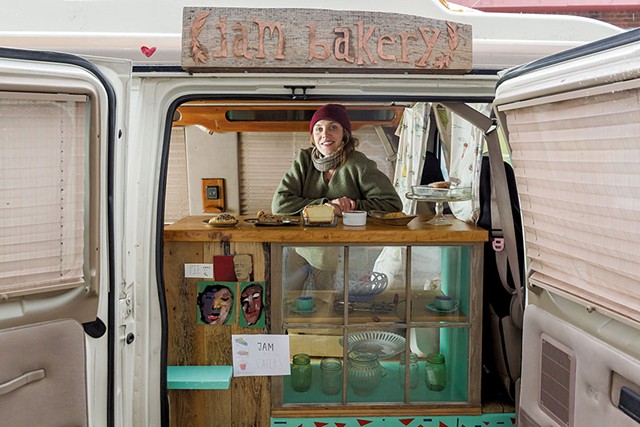 When Shiel Worcester graduated from high school, her plan was to be a nurse. Her mother, a nurse by profession and a cook by passion, was "perhaps the influence there," she says over coffee at Maglianero Café in Burlington. We're talking on a chilly Tuesday the week before Thanksgiving, a holiday that, for many bakers, ends a weeklong twilight zone of rolled piecrusts, peeled apples and pumpkin filling.

Worcester spent eight months at Pace University in New York City "before realizing nursing wasn't what I wanted to do," she says. She moved back to her hometown of Cabot, where "the easiest job I could get at the time was in the kitchen." Thus Worcester embarked on what would become an enduring pastry profession. Her first gig was at Rainbow Sweets, the European-style bakery in Marshfield.

Worcester opted to pursue her burgeoning passion in pastry school, a training environment, she remarks, where it's "OK to try new things and screw them up." A NECI degree in baking and pastry arts led her to an internship at the now nationally famed Momofuku Milk Bar, a New York City bakery that perfects classic techniques while giving them a creative spin. Think corn cookies and grapefruit pie.

After a year in New York, Worcester moved to Burlington. There she gained a couple years' experience on the pastry team at Hen of the Wood — completing a trio with Andrew LeStourgeon and Amanda Wildermuth, the Hen alumni who now front Burlington's Monarch & the Milkweed. In January 2014, Worcester launched a Kickstarter campaign to start her own business, a mobile eatery called Jam Bakery. She raised nearly $7,000 by 2015, enough to purchase and remodel the '97 Ford Econoline she currently uses as the Jam Bakery storefront.

Perhaps you've spotted the van at events such as ArtsRiot's Truck Stop, or pulling up to local hubs such as Onyx Tonics Specialty Coffee, Nomad Coffee and Maglianero Café to drop off weekly pastry deliveries. Worcester caters weddings, too.

In a brief break from holiday baking, she sat down with Seven Days to talk Thanksgiving staples, Vermont food finds and the importance of "the why."

SEVEN DAYS: You come from a culinary background — your dad was a chef at Sarducci's [Restaurant and Bar in Montpelier] for almost two decades. Why pastry?

SHIEL WORCESTER: Pastry initially started out as another creative outlet for me. That [creative drive] led me to wondering about the science behind it — the reason bread takes longer to mix than cookies, for example, or why you'll mix something for 10 minutes instead of five. Once you know the science and technique behind [baking], all these doors open up. But you need to know "the why" first: why you do a certain technique in a certain sequence. Once you know how to make ice cream well, then you can play with recipes. Training and basic knowledge opens those doors to be[ing] creative.

SW: I loved working [at] Hen, but fine dining has never really been my thing. For me, I like going back to your really basic cookies, pies, cakes — that sort of thing. Not overthinking things, but doing something really well and then expanding on it. What Andrew [LeStourgeon] does is great — it looks great, it tastes great. But I'm also not that fussy. I like misshapen croissants. I like slightly burnt, chewy edges. That's my aesthetic. That's attractive to me.

Going into [Momofuku] Milk Bar ... there are so many classic things twisted to taste unique and amazing. The corn cookies are one of my favorite desserts of all time. There's "cereal milk" soft-serve. It's like somebody got really stoned and decided to whip up a bunch of food.

SD: How else is the Vermont food world distinct?

SW: Growing up, my parents lived off the land. They built their own house, had a huge garden, apple trees, a weekly drop-off with a ton of vegetables. Here, you can source food right from your neighbor. You can have a close relationship with the people you supply from. I get my eggs from Beth [Whiting] at Maple Wind Farm; she's wonderful, and her eggs are wonderful, as well. In Vermont, you get to know so many people just from sourcing ingredients. There are amazing ingredients at your fingertips, and you build this network of people. That's half the fun for me, and I don't think other places are like that.

SD: If you left Vermont tomorrow, what Vermont things would you miss most?

SW: Eggs from Maple Wind Farm. The experience of going to "pick your own." Every summer, my mom and I pick blueberries at a small family farm called Brown's Beautiful Blueberries in Craftsbury. In the fall, we go to Burtt's Apple Orchard in Cabot. And I'd miss bread. I'm a fan of O Bread Bakery's seeded baguette. Also, Bohemian Bakery has this lemon-rosemary bread with salt on top ... I could eat loaves of bread in one sitting.

SD: What did you eat growing up?

SW: We had a lot of food from the garden. We had chickens and goats, and my mom sometimes made goat cheese. She loves to cook, and my dad's worked in restaurants all my life. Occasionally, my mom would let us pick out one kind of junk food. My go-to was something like Gushers. Those things aren't even close to being fruit-flavored.

Until recently, I didn't realize or appreciate my upbringing in food: to eat food grown outside your home, to have your own animals. I didn't know how special that was then. Because my parents loved to cook, we would always sit down together for dinner. Food was always a gathering place.

SD: What are three foods that make life worth living?

SW: Good bread. Scones. And vegetables — I'm surrounded by butter and sugar all day long, but I love vegetables. I love carrots and raw, shaved beets. Or roasted beets. Thinly sliced, salted cabbage. At the end of the day, I like to shred every fresh vegetable I have and make it into a salad.

SD: What are you making for Thanksgiving this year?

SW: Tons of pies, of course. We'll have a lot of vegetarian dishes, and the usual things from our childhood, like stuffing. I can eat an embarrassing amount of cranberry sauce, which my mom makes from scratch every year. There's mashed potatoes with caramelized onions in them. And pies. I'll probably make all the pies I'm selling for the holidays. I love the pecan pie — I make mine with an oat crust — and custard pies, like the honey chai. I make a homemade chai spice and steep the blend overnight in the cream that goes into the custard.

SD: Whom do you look up to in the culinary world?

SW: There are many people. A woman I worked with at Milk Bar started her own pie shop in Detroit called Sister Pie. [Baker-owner Lisa Ludwinski] started four years ago, making pies from her parents' home. This past year, she had a spread in Bon Appétit magazine. Since beginning her business, she went from one employee to 20. She's gotten great recognition for what she's doing. Seeing another female kick ass makes me happy.

[Another mentor] is definitely Joanne Chang [owner of Flour Bakery and Café in Boston]. One of the first cookbooks I bought was hers. Everything she creates is relatively basic but solid.

SD: Do you think it's important to have female mentors?

SW: I do. I think it's important to see other women accomplish things. I also love [LeStourgeon] and the energy he brings to a kitchen. For me, I've naturally gravitated towards female mentors, but it doesn't have to be one or the other.