Executive chef Christina Scifo of Deep City, a restaurant on Burlington's lakefront, finally sees a not-too-distant future when the provoleta will be back on the menu.

The bubbling skillets of melty cheese topped with an herby citrus sauce barely saw the light of day back in March 2020 during the restaurant's soft opening weekend.

Scheduled to launch fully to the public on March 19 of last year, the eatery associated with Foam Brewers operates out of the southern end of the brewery's Lake Street building and also provides food for taproom guests.

The year has been a roller coaster for Scifo and her seven-person kitchen team. 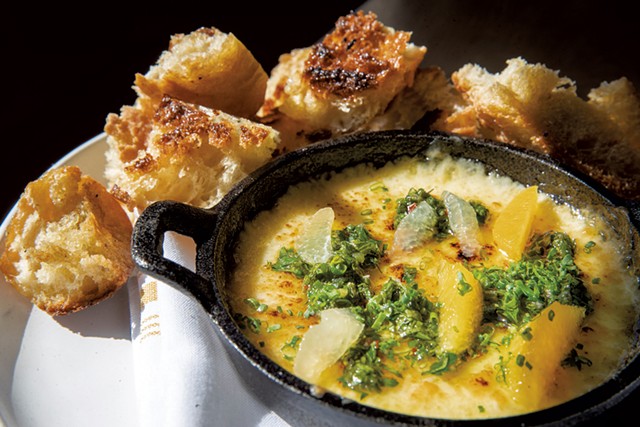 A year ago in March, poised to head full throttle into their opening week, Deep City quickly downshifted to takeout only. During the summer and fall, it added seated dining within state restrictions at both Deep City and Foam. Deep City went back to takeout-only in December but continues to offer on-site service through the Foam side of the house.

Even during maximum pandemic-permitted on-site dining, Deep City's menu has been very different than Scifo imagined. For starters, everything must be takeout friendly: Skillets of melty cheese, for example, don't travel well.

The chef and her team are finally allowing themselves to look forward with hope, as are we all. Scifo expects to reopen Deep City for weekend seated dining in April and "full-blown whatever is allowed" in May.

In anticipation, they are running recipes through the kitchen, such as snapper ceviche with pickled peppers and cucumbers; cured and brined local wood-grilled pork chops; and smoked mushrooms with ricotta polenta.

Scifo spoke with Seven Days about breakfast sandwiches, ice cream in winter and what she'll take away from the pandemic experience. 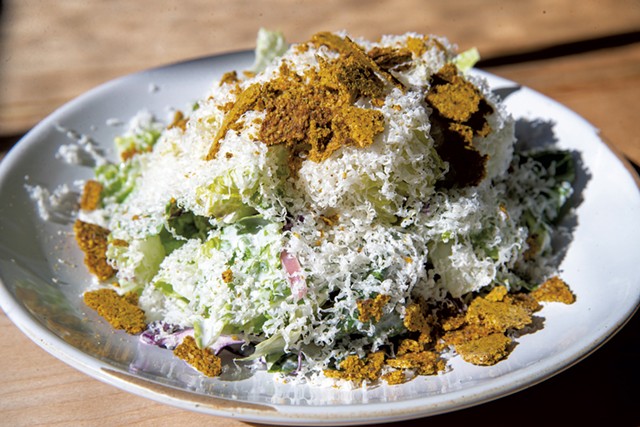 SEVEN DAYS: You don't open 'til noon. How'd a breakfast sandwich land on your menu?

CHRISTINA SCIFO: I know for me, as a chef, I don't really usually wake up that early. Sometimes I would love an egg sandwich. I think it's the New York in me. Ours comes two ways: with thick-cut bacon or with a spicy lamb-and-pork sausage that we make here. It's like a fancier version of a [New York City] bodega egg-and-cheese on a roll. It has just taken off, and that kind of blows our mind. Sometimes we'll get an order for one at 7:30 at night, and we're like, Awesome. It's one of those things that is kind of like a domino effect. One goes out to the dining room, and you'll see 10 more orders after that.

SD: Any other surprises in what customers have gravitated to?

CS: As crazy as it sounds for the temperatures outside, we've been doing a lot of homemade ice cream. Our pastry chef, Quinn Gervia, and me were trying to figure out something great for takeaway and something that we can serve in the brewery. There are so many great different beers that come out of Foam. We kind of just played with it.

We took some porters and some of the sours and just added the flavors that go along with the beer. We did some R&D and picked our favorites. We've got Constant Surprises sour ale with lime curd and coconut flakes, and Milk and Black Spiders stout with salted caramel and dark chocolate swirls. I mean, they're delicious, but ice cream in winter?

SD: What has gotten the kitchen team jazzed lately?

CS: [Recently,] we ran some ribs on special, and everybody was really excited about them. We braised them in kimchi, a bunch of Asian flavors. Then we took the jus and reduced it down. That was like the barbecue sauce for it. Whenever [an order] ticket came in, everybody was like, "Oh, throw an extra one in for snackies." Those are snacks for the kitchen so everybody can taste and see how it's developing from braising to the finished product.

SD: Ah, so it's an educational snack.

CS: [Chuckling] Yeah, all the snacks are educational.

SD: How are you keeping everyone motivated during a pretty stressful time?

CS: This is probably one of the biggest challenges I've ever faced as a chef. Motivating your team is always extremely important. Right now, it's difficult. We just try to stay aware of everybody's mental state. It's made me change my management style quite a bit. We're all in this crazy situation. We're just trying to be a little kinder and gentler to each other, especially in a kitchen setting.

"We need to keep trying out recipes to keep us excited." Christina Scifo tweet this

[It's about] recognizing if somebody needs some time off, or if they need to work more to kind of focus [their] mind somewhere for a little bit. We need to keep trying out recipes to keep us excited. Nobody can really go out to eat right now, [and] that's a lot of inspiration for cooks and chefs. We might buy some stuff from Thai Phat and play around a little bit.

And we play a lot of Mario Kart together. It's been a fun thing for all of us to kind of bond over. Sometimes you need a break from food.

SD: Does everyone take turns choosing the kitchen playlist?

CS: Yes, everybody has their own style. Everybody makes fun of me because I'm a Lady Gaga fan.

CS: Love the Clash. I got to name a Foam beer that we collaborated on: Lost in the Supermarket [a 1979 song by the Clash]. We brainstormed with the brewers on what was in peak season. We roasted and smoked squash from Pomykala Farm and used Foam's own honey plus Sichuan peppercorns, cardamom and lemon zest. 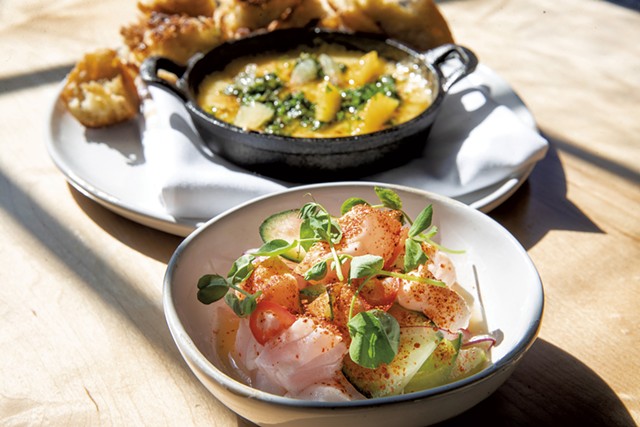 SD: Will the past year have a lasting impact on how you approach your job?

CS: If anything, it's mellowed me out quite a bit. It's made me realize there are things beyond your control. It makes you lean on your staff more, and they lean on you more. Connections in the kitchen are always deep, like family. This made them deeper.

It made me adjust my cooking style, too. Like what product we would use: It was even more local because [at some points] we were having a very difficult time getting stuff. I never thought I'd be putting fine-dining technique in sandwiches, like curing short ribs for a week and then doing a 48-hour braise, [and then] reducing the jus — for a sandwich. Some of what we came up with, like the miso onions, will probably show up on our menu.

SD: The menu's salads — like your signature ranch and romaine with radicchio, pickled shallots and carrot pepita crunch — have great textural variety. Can you give home cooks some ideas for how to up their salad game?

CS: For me, crunch is really important. We like to use different kinds of lettuces, things like frisée, romaine and endive, to add that extra crunch. You can get those at a lot of supermarkets. If you want to explore an Asian market, which is always a fun thing to do, there's a lot of dried stuff that's great to chuck into a salad, like seaweeds, dehydrated little shrimp, crispy onions or crispy garlic. There are a lot of different sesame seed mixes with nori, too.

SD: At home with your partner, what are you cooking?

CS: To be completely honest, it's usually comfort food from when I was a kid. I grew up very Italian, so a lot of tomato sauce and chicken cutlets and stuff like that. Kind of boring but just comforting.

Correction, March 12, 2021: An earlier version of this story included an error regarding the year Deep City planned to originally open. It was March 2020.