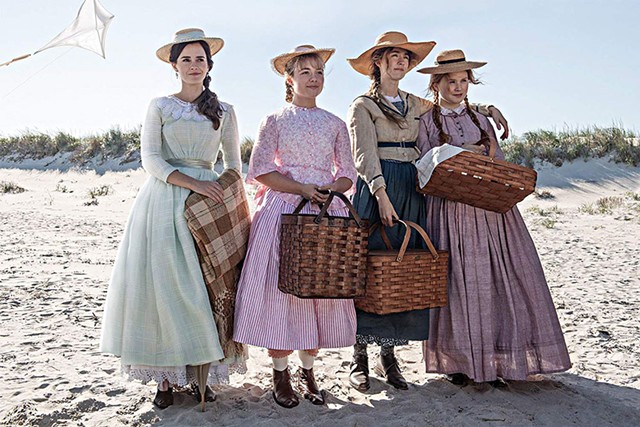 After years of watching Greta Gerwig play variously clueless, direction-free characters — several with artistic ambitions but not enough talent to realize them — isn't it a total treat to see her come into her own as a writer and director? Lady Bird (2017) was fun and promising, but her second solo foray behind the camera exceeds any and all expectations her debut occasioned. Little Women is simply a first-rate film.

There are way too many ways in which it's first rate to catalog in this space, but a partial cinematic inventory would start with Gerwig's postmodern reshaping of the source material. Her screenplay (a rewrite of a draft by Away From Her director Sarah Polley) draws not only on Louisa May Alcott's beloved 1868 novel but on various other works of the author. The filmmaker displays impressive skill and instinct in the way she fractures and then rearranges the book's timeline. She surgically extracts all traces of sermonizing ("The country just went through a war. People want to be amused, not preached at," one character observes) and even makes audacious, note-perfect plot revisions and dialogue additions of her own.

The story of Jo March (Saoirse Ronan) and her sisters Meg (Emma Watson), Beth (Eliza Scanlen) and Amy (Florence Pugh) has been given the big-screen treatment before, of course. Katharine Hepburn, Elizabeth Taylor and Winona Ryder are among the actresses who've created their own versions of Alcott's creations. No previous adaptation, however, has been infused with remotely as distinctive a sensibility or benefitted from such an eye for intoxicating visual detail.

Gerwig opens her interpretation with a scene originally set much later in the classic. Jo, the author's stand-in, is in New York attempting to sell one of her stories to a big-time publisher. Tracy Letts proves to be one of the movie's secret weapons in the role of Mr. Dashwood. If the Oscars gave an award for Best Muttonchops, Letts would be a lock. The relationship between the two is a pleasure to track.

Scenes from earlier days follow. We watch as Marmee (Laura Dern capping a banner year) presides over a bustling adolescent salon in her Massachusetts home. Jo wants to be a writer. Beth excels on the piano. Amy paints and vows "to be great or nothing." All are charmed by Laurie (Timothée Chalamet), the louche scion of a wealthy neighbor. Who winds up with whom actually qualifies as a spoiler a century and a half after Little Women's publication. The writer-director believed Alcott's ending needed work. And guess what: Gerwig's works better.

For the most part, to be sure, the story isn't going to surprise anyone. Most of Alcott's time-tested touchstones are lovingly preserved, even if they have been shuffled. What audiences are likely to find surprising is the young filmmaker's mastery on so many fronts.

The dialogue is superb, pivoting exquisitely in tone from romantic to absurdist to feminist and back. The performances — Meryl Streep, Bob Odenkirk and a never-better Chris Cooper are in there, too! — are uniformly inspired, and someone inspired them. I'm guessing the director.

Then there's the cinematography. Honestly, I'm rarely caught off guard by the beauty I encounter on screen. But this film left my eyes hopelessly in love. Gerwig was led to the picture's strikingly luminous palette by a careful study of paintings of the era, their use of landscape and light. The result, I feel confident, is itself certain to prove an enduring work of art.

The original print version of this article was headlined "Little Women"