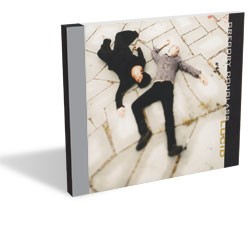 Seems like ages since we’ve heard from Gregory Douglass. The local pop prince’s last record, the brooding and sometimes confrontational Battler, was released more than two years ago, which is something of a dry spell for this prolific songwriter. Though he’s been busy playing weekly online concerts and revisiting the 1980s as a member of local cover band Side Pony, he’s such a phenomenal studio artist that it’s hard not to raise an eyebrow when he hasn’t released a new record in a while. Douglass’ fans will be delighted to learn that his eighth studio album is finally here. And Lucid was more than worth the wait.

Eerie, music-box-like chimes introduce the disc’s opening cut, “The Night.” Douglass matches this somber aesthetic by luring the listener in with a slow-burning melody that feels both soothing and dangerous. He is a fantastically talented singer, but here displays more than just otherworldly pipes. Elite performers are often tempted to rely on ornamental glitz — it’s a forgivable transgression that Douglass has occasionally been guilty of in the past. But throughout Lucid, his performance is refined; he communicates more with nuance and guile than with show-stopping vocal acrobatics. The results are often exquisite.

The title track begins as a piano-driven romp, then quickly changes course and veers into atmospheric electro-pop. Crystalline production has long been a hallmark of Douglass’ recorded work. Lucid is no exception, particularly on this song. A phalanx of ethereal noises dart around the speakers, highlighting Douglass’ intense vocal melody.

Even more than on previous records, he covers a variety of stylistic terrain on this one. From easy, mid-tempo rock on album standout “White Out” to new-wave electro-pop on “Naysayer” and sinister ruminations on “Raven,” the singer displays impressive versatility and artful curiosity.

Still, regardless of various sonic disguises, Lucid is still very much a Gregory Douglass record. Meaning that fans will find typically well-crafted pop suites, thought-provoking lyrical turns and adventuresome arrangements. That last characteristic is particularly true on the songs featuring cellist Monique Citro, whose work on “One True Thing” is alone almost worth the price of admission.

Gregory Douglass celebrates the release of Lucid with a show this Saturday, June 11, at the Higher Ground Showcase Lounge. Justin Levinson opens.