In Barre, Farm Greens Grow in a Former Granite Shed 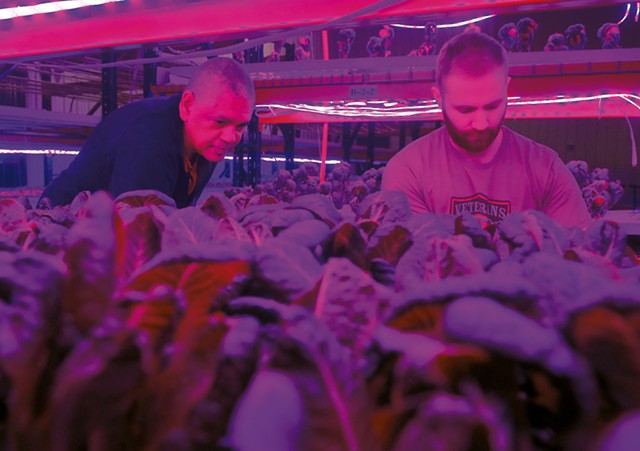 Greg Kelly and Jake Isham have come a long way together since they met in 2016. At the time, Kelly, 61, was trying to grow lettuce in the basement of a mutual friend of his and Isham's — and it was not going well.

"I was using LED lights, but I didn't realize they wouldn't grow at 50 degrees," Kelly admitted. "I didn't even grow house plants. I knew nothing."

Their mutual friend soon introduced the pair because "neither of us would shut up about vertical farming," Isham, 28, explained recently in the Barre headquarters of their 2-year-old company, Ceres Greens.

While the business partners have moved away from literal "vertical" farming, in which plants sprout out of tall planter walls often called "living walls," their indoor farm still has a vertical, space-saving component and follows the same principles of hydroponic growing, or "controlled-environment agriculture," as they call it.

By the end of this year, their converted 12,500-square-foot granite shed will hold about 100,000 leafy green plants on shelves layered eight high. The top layer will approach the 26-foot ceiling of the cement-floored industrial space, which evokes quite a different feeling than the average Vermont farm.

At Ceres Greens on an icy early February day, production manager Holly St. Jean was placing seeds from Wolcott's High Mowing Organic Seeds into compostable coconut-fiber plugs nestled into plastic trays. A warm, brightly lit germination room coaxes them into sprouting before they head out to the main floor, where orange metal shelves are filled with vibrant green and red lettuces and aromatic basil.

Electronic sensors closely monitor ideal temperature and humidity. Plants are sustained by LED lights and mechanically pumped water and nutrients. Their roots will never search the soil for nourishment and moisture. Their leaves will not be exposed to sunshine or dew; nor will they face hungry pests, flooding or frost. 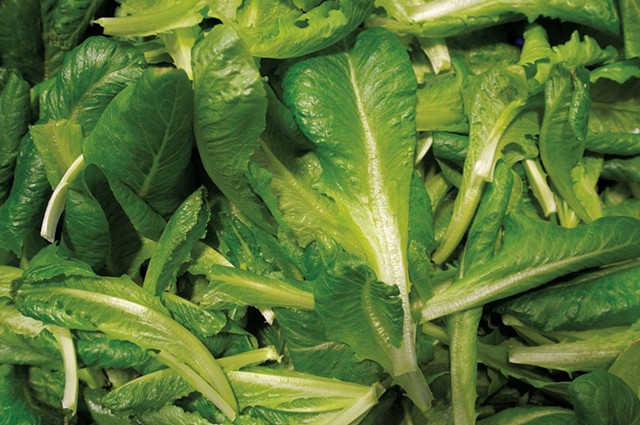 Ceres Greens does not use pesticides or herbicides, and the system sterilizes and recirculates any water not taken up by the plants. Kelly and Isham estimate they're using 85 percent less water than soil-based farms. Electricity is a significant input, but they're working toward being 100 percent solar powered.

To some, this approach to agriculture is yet another sign of humans trying to distance themselves from the natural world and the impacts we have had on it. Others, like Kelly and Isham, believe it's a valuable, environmentally responsible way to help feed Earth's booming population in the face of depleted natural resources and increasingly extreme and unpredictable weather patterns.

Ceres Greens received a noteworthy vote of confidence in December when it was named one of two winners of Accel-VT Ag & Food Tech 2018. The three-month, Vermont-based business accelerator program is open to early-stage ventures throughout North America that address climate change in various ways.

Managed by the Vermont Sustainable Jobs Fund, Accel-VT's annual entrepreneurial boot camp supports startup or seed-stage enterprises in a broadly defined sector each year. Participants are selected through a competitive process, then all receive business-development support, mentorship and potential access to capital. The eight companies in the 2018 boot camp represented six states and a range of technology-based solutions to issues within the agriculture and food system.

At the end of the program, participants vote on two winning ventures, which each receive $25,000. In addition to Ceres Greens, the other 2018 winner was AgHelp, a Michigan-based company that has developed a mobile platform connecting agricultural workers, employers and support agencies. The 2019 Accel-VT program will focus on energy.

While Kelly and Isham were gratified by their win, simply participating in the program helped them build their network and validate their fledgling operation for potential investors. "It helped us clarify our business strategy," Kelly said.

The prize dollars made an appreciated but relatively small contribution to the $1 million budgeted for full build-out. Ceres Greens has raised about a third of that goal so far from a variety of sources, including crowdfunding $69,000 via StartEngine; personal funds from both cofounders; a private placement offering; and loans from Yankee Farm Credit, Community Capital of Vermont and the Central Vermont Economic Development Corporation.

Ceres Greens is part of Yankee Farm Credit's FarmStart program for new agricultural enterprises that lack the track record, capital or collateral required for most business loans, explained Yankee senior vice president Dave Lane. The maximum loan is $75,000 over a five-year term, and participants are assigned a business adviser. "Our goal is to get them ready for a more traditional lending program," Lane said.

Katy Coombs, who has worked closely with Kelly and Isham for the last year as their FarmStart adviser, had previously researched controlled-environment agriculture for another FarmStart loan in New Hampshire. "It's definitely a different way of growing," she acknowledged. "I think we're going to see a lot more of it going forward. It's still very local, and it's grown in a clean way using methods that are socially friendly."

Coombs was initially impressed by Kelly and Isham's thorough business plan and their complementary skill sets. "They don't come at it just from the idealistic standpoint," she said. "They are also driven by the numbers."

The cofounders' different backgrounds and perspectives also contributed to the way each landed on this type of agriculture as both a mission and a business opportunity.

Kelly is originally from Guam but moved to Vermont 24 years ago from San Francisco. "It was as far from Silicon Valley as I could get," he said with a wry smile. He did continue a career in technology, building a regional fiber-optic network company, TelJet, which he sold in 2013.

After the sale, Kelly started looking into various sectors for his next move. "Food is a business that's never going to go out of fashion. Everybody has to eat," he said, "and I remembered getting fresh, local produce year-round in California."

He dug into the environmental aspects of food production. "I looked at water, the global water crisis. I looked at air quality," Kelly said. "We have too many on the planet to rely on what a variable harvest produces," he concluded. "How do we have a predictable harvest and not be harming our environment? We need to take a technological approach."

Isham, an eighth-generation Vermonter, grew up in Winooski and graduated from Norwich University with a degree in political science. He was commissioned as an infantry officer in 2012 but was medically retired four years later due to a serious health condition.

While working in finance, Isham started an online master's degree in diplomacy and international terrorism. "I was studying how civil unrest and resource scarcities go together," he explained. "Water and food shortages lead to economic instability. Civil unrest and conflict often follow."

Isham looked at projected global population growth and determined, "we need to develop ways to grow more food everywhere. This is a kind of agriculture you can do almost anywhere."

Shortly after the two were introduced, they expanded Kelly's growing experiments into a small warehouse in Colchester. "We killed a lot of plants," Isham said, laughing. Their first big strides came after he participated in a three-month Veterans to Farmers program in Denver on controlled-environment agriculture.

The business partners balance each other: Kelly has focused on the technology, Isham on the business and marketing side. The more seasoned Kelly is happy to let his younger colleague take the lead. "I didn't want to be the boss anymore," he said. "Jake has a lot of energy and drive. He wanted to be the boss."

Isham, in turn, appreciates Kelly's depth of experience. "I needed somebody to show me the ropes," he said. "I needed someone to steer me in the right direction, calm me down sometimes."

Since the Barre space was renovated last spring, Kelly has had his hands full refining and scaling up their proprietary growing method. In the relatively new field, there are few turnkey systems or specialty suppliers. He is often repurposing parts from other industries, such as marine and recreational vehicle water pumps.

It's no small feat to reproduce what Mother Nature can do so well at her best but with a better track record for reliability. "I joke that I understand why religion is popular in farming communities," Kelly said. "We get to play God," his business partner interjected with a laugh.

Ceres Greens has so far sold only limited quantities of its harvest to a few local restaurants but is poised to quadruple production by the end of April. Its business plan is built on selling 80 percent bulk to restaurants and institutions and 20 percent to independent retail stores such as co-ops. Kelly and Isham expect their price point to fall between conventional and organic and will hang their hat on freshness and low environmental impact.

"Some small part of this is educating people," Kelly acknowledged.

In Vermont, they anticipate hiring eight to 10 employees, among whom Isham hopes to include fellow veterans. Longer term, they envision 10 Ceres Greens facilities across the eastern U.S. employing a total of 100.

Kelly and Isham believe that Ceres Greens will be part of a wave and that there's room for everyone in the burgeoning sector. "We're not trying to corner the market," Kelly said.

More farmers growing more greens in a variety of ways makes sense to these entrepreneurs. "We should all be eating more greens," said Isham.

The original print version of this article was headlined "Salad Days"