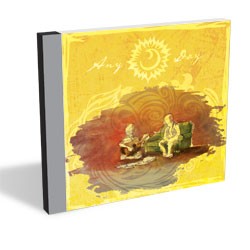 Typically, when a songwriter records an album composed entirely of another artist’s songs, it’s meant as tribute, often of the posthumous variety. But last we checked, local songwriter Ryan Fauber is alive and well and still writing and recording with some regularity. That makes Any Day: Greg Alexander Sings the Songs of Ryan Fauber something of a curiosity. On the new full-length released under the Jenke Records banner, Burlington’s Greg Alexander mines Fauber’s romantic soul, not to mention his catalog. The result is a touching collection of material that both highlights Alexander’s vocal prowess and musical sensitivity and casts the prolific Fauber, a genuine songwriting enigma, in a new light.

On his last record, Believer, released in early 2012, Fauber offered a continuation of his uneven 2006 effort, Greatest Hits. Like that earlier album — which was culled from a cache of some 200 songs — Believer was a manic effort, a dark and challenging listen that often crumbled under the weight of its own despair. Fauber has never suffered a shortage of feeling. What has generally impeded his progress as a songwriter is an inability to filter, to hone his outsized passion and strike a balance between emotional potency and artistic nuance. Maybe he needed an editor.

Any Day represents eight of the strongest, most compelling and effective songs Fauber has ever written — and he’s obviously written quite a few. What’s more, in Alexander’s capable hands, they offer a delicacy previously unheard in Fauber’s work.

As the saying goes, beauty is in the eye — in this case, the ear — of the beholder. And Alexander has discovered a serene beauty in Fauber’s lovelorn musings. From quiet sermons on faith and faithfulness such as “Are You With Me?” to late-night laments such as “I’m Letting You Go,” the singer artfully navigates the songwriter’s humbly poetic prose. It doesn’t hurt that Alexander is a deeply gifted vocalist with a knack for employing just the right amount of reedy, soulful angst. It’s a potent combo.

Any Day reminds me of the Incredible Hulk. A product of David Banner’s colossal rage, the Hulk is initially a frightening and destructive force. The thing that gives him his power is also what makes him dangerous. It’s only when Banner learns to control his alterego that he becomes a superhero. Similarly, Any Day suggests that Fauber, with the help of Greg Alexander, has learned to master his formidable passion.

Any Day: Greg Alexander Sings the Songs of Ryan Fauber is available at tommyalexander.bandcamp.com.