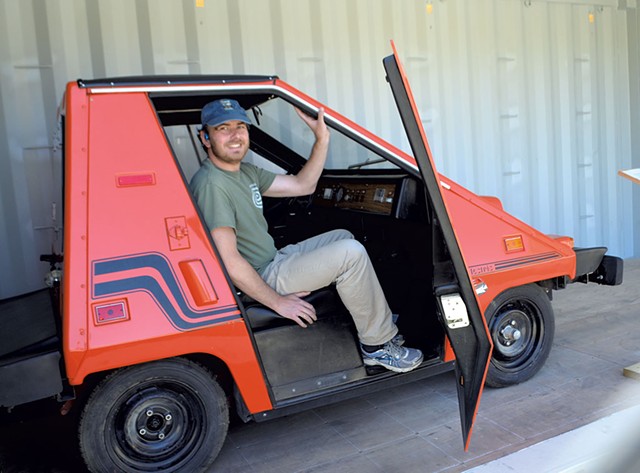 In a grassy field in Waterbury Center, Alex Chernomazov is transforming a retrofitted shipping container into, of all things, a welcome center. And he's in a bit of a time crunch. That's because on Saturday, June 2, he plans to greet visitors at the grand opening of GreenSpark, a combination museum and quirky roadside attraction. Chernomazov claims it will be the first "interactive sustainability park" in the country.

The bearded 39-year-old is busy applying the finishing touches to the park as he speaks to Seven Days. He's spent weeks hauling renewable energy gizmos from the basement of his house in Montpelier to the 12-acre plot of land.

This particular sunny Monday in May, he's adjusting the solar panels atop the shipping container/welcome center for maximum sun exposure. While tweaking a solar-powered battery charger at the back of the container — which powers everything from his laptop to his lawn mower — Chernomazov explains that his goal is to show off green technologies that could provide cheap, practical ways for people to reduce their carbon footprint. Focusing on transportation, green building and renewable energy, he aims to offer a glimpse of what affordable green living could look like.

The name GreenSpark serves as both a descriptor for the eco-centric park and Chernomazov's vision — "a spark of inspiration" for visitors, he says. Provided he's ready for them by June 2.

"We're in partial hibernation mode," he says apologetically, gesturing at an empty glass case in the welcome center that will soon hold T-shirts and books. "But [we're] rapidly waking up." In a homey touch, he's hung a flowerpot of pink impatiens at the entrance.

The do-it-yourself approach is nothing new for Chernomazov, who has implemented his vision from scratch. The Ukraine native spent five years researching and planning, seeking out renewably powered gadgets and tools on Craigslist and eBay, and watching YouTube videos on how to fix them up.

He spends most of his time working on the project, Chernomazov says, leading a reporter down a gravel road from the welcome center, past a cattail-fringed swamp, to the three shipping containers that hold the park's exhibits. For him, GreenSpark has become a combination of livelihood, hobby and passion. The gadgets he's accumulated range from the quirky to the niche.

Chernomazov explains the nuances of a biodiesel processor made of two oil drums that makes vegetable oil usable for diesel engines. He got it from an East Montpelier farm. He then takes a seat on a Whike — a wind trike — and demonstrates the way a rider can use the tricycle's pedals and a windsurfing sail rigged overhead. 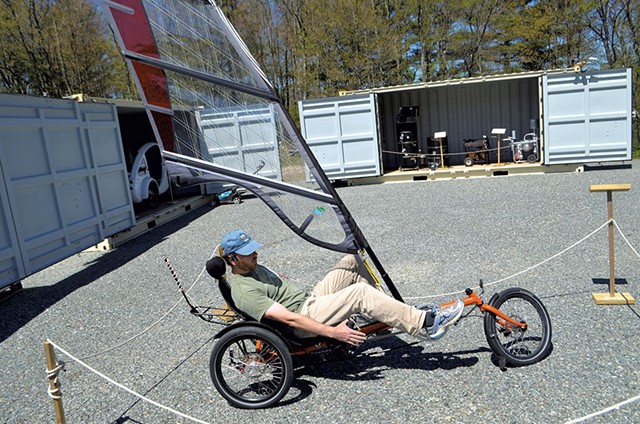 Chernomazov's favorite display is an ELF, which stands for "electric, light, fun." It's a bike-car hybrid that can be pedaled or run by solar-powered electric assist. Until he installed it as a GreenSpark exhibit, Chernomazov says, he used it to go grocery shopping and run errands in downtown Montpelier.

Many of the displays are not recent innovations but technologies that have been around for decades. One such relic — an orange two-seater electric CitiCar — was produced between 1974 and 1977 during the U.S. oil embargo. When oil prices dropped, buyers for the car plummeted.

Up a mown path from the exhibits, Chernomazov has built samples of cordwood and hay-bale walls — both materials are affordable and accessible, he says. These, too, are tried and true approaches to green development.

"The whole idea is to show people various technologies that exist and are available and people may not know about," Chernomazov explains.

As theme parks go, GreenSpark is small, with a rustic vibe. But what the park lacks in glitz and polish, Chernomazov makes up for with his knowledge and sheer enthusiasm. And he plans to expand within the coming months. A sign indicates two more green building alternatives that he hopes to create later this year: a gazebo made with earth bags — bags filled with soil usually available on-site — and a shelter made from recycled tires.

For GreenSpark's grand opening, admission will be by donation. After that, it will be $12 for adults and free for kids under 18. Ideally, Chernomazov says, the park will generate some income; he currently has no other salaried job, having been laid off from his IT position at Keurig Green Mountain in 2015. His wife, Ella Malamud, a former science teacher in Cabot, quit full-time work five years ago to raise the couple's two children. The family lives frugally, subsisting on rental income from several apartments they own in Montpelier.

But more important than making money, Chernomazov says, is spreading the word about sustainable living. To that end, Malamud plans to develop curricula for school groups or science classes who might take field trips to the site.

"We want to make sure we get the educational message out there," Malamud says in a later interview. It's not a message she or her husband heard while growing up.

Both are from Kharkiv, Ukraine, and immigrated to New York City after the fall of the Soviet Union — their families arrived in the U.S. within weeks of each other in 1994. Chernomazov and Malamud attended the same high school but didn't meet until 2006 during a group road trip to visit national parks in Arizona.

By then, both were looking for change. Chernomazov had worked in IT and network security, first for Reuters and then for financial companies with the New York Stock Exchange. During a lunch break one day in 2008, he bought a book from Barnes & Noble that detailed the process of building affordable homes out of cordwood, sawdust and mortar. The idea got him hooked on exploring environmentally friendly ways of living.

"The whole idea is to show people various technologies that exist and are available." Alex Chernomazov tweet this

Around the same time, Malamud, who was working as a high school science teacher in New York City, took a course on wildcrafting, or harvesting wild plants.

Suddenly, the prospect of buying a home in New York and settling down to the daily grind "wasn't quite enough," Malamud recalls. Instead, after marrying in 2009, the two quit their jobs and went on a yearlong tour searching for ways to live sustainably.

Chernomazov outfitted a Toyota 4Runner with a wooden bed frame and space for clothes, and the newlyweds set off for their "honey-year," finding destinations via word of mouth, with some help from Google. In Texas, they met a man who had built a bike to power his washing machine. In California, they visited a facility that claimed to be the oldest biodiesel plant in the country. The pair also made their way to Chena, Alaska, where a farm heated its greenhouse and grew tomatoes using heat from hot springs.

At most of the sites they visited, ordinary individuals were trying to conserve resources and live off of the land, Chernomazov says. That DIY ethos would become a guiding principle behind GreenSpark.

"The whole idea is that you can do these things on your own," he observes.

Chernomazov and Malamud moved to Vermont in 2011, bringing their vision to implement what they had seen on their road trip. They eventually settled on an outdoor "museum," GreenSpark, to share what they had learned.

"It's the best way to get information to people without making people get out of their comfort zone," Malamud says, adding that the museum format makes green technology "comfortable, accessible, easy to see."

After losing his IT job, Chernomazov decided to devote himself full time to GreenSpark. He remembers thinking, If I don't do it now, I'll never do it.

Around the same time, he and Malamud found the Waterbury parcel — a plot of land off Route 100 that they figured was close enough to other tourist destinations to attract visitors. The couple spent more than a year rounding up the necessary state and local permits for the project. In the meantime, they started doing research, talking to renewable energy experts and accumulating gadgets.

When Chernomazov can't fix something himself, he'll call his dad, a former shop teacher, who now lives in New Jersey. For the most part, he says, "It's not rocket science."

During a monthlong soft opening last October, GreenSpark attracted a trickle of visitors daily, Chernomazov says. As he continues building out the museum-park, he envisions hosting 70 to 90 tourists a day. Eventually, he expects to have a fully sustainable theme park, perhaps with a hydraulic train or a hydro exhibit, and to offer workshops and training for anyone interested in learning more.

For now, though, Chernomazov is focused on June 2. GreenSpark's grand opening will include guest speakers and three workshops, he says — though he was short on specifics. There also will be games and activities for kids. Weather permitting, he'll heat up a solar-powered grill to make hamburgers and veggie burgers.

For Chernomazov, the big day comes with mixed emotions. He compares it to watching a child head off to kindergarten — full of excitement but also trepidation.