Broadfork owner Carol Fairbank keeps the beautifully speckled guineas "because they're cool," she said. Their small eggs make perfect, poppable hard-cooked eggs, she added, while the large, rich duck and goose eggs are especially good for baking. She recently used one goose egg in place of three chicken eggs to make the "fluffiest, nicest pancakes ever."

The first week of June would bring more animals to the homestead where Fairbank lives with her two twentysomething sons. She was expecting two pigs and her first group of meat birds, of which the family will raise 100 this year. The Fairbanks also tend bees, a hoop house, extensive gardens, and a small orchard of apple, pear, plum and tart cherry trees.

"The more you can do for yourself, the more resilient you are." Carol Fairbank tweet this

When the family moved from Athol, Mass., to Greensboro in 2014, "we started off with the intent of providing food and nourishment and activity for ourselves," Fairbank, 49, said. "Then, it became, well, why shouldn't everybody be able to do this?"

To answer that question, Fairbank became a self-employed teacher of homesteading arts. She partners with such organizations as the Orleans Southwest Supervisory Union and the Grow Your Own project (a collaboration of the Center for an Agricultural Economy, Rural Arts Collaborative and the Hardwick Area Food Pantry) to offer mostly free or by-donation classes.

In local schools, at community centers and at her homestead, she teaches skills such as drilling a mushroom log, breaking down a whole chicken, starting vegetable seeds and storing food for winter.

Schoolkids make scones and shake cream into butter while the scones bake. "People make shiitake logs with me and then take the log home," Fairbank said.

The homesteader's past employers range from a huge tech company to a tiny arts nonprofit. In her new occupation, "It's about, what can we teach other people to do?" she said. "What can they do to become more food independent, more self-sufficient, more able to adapt to these changes in the economy [like] we have right now, where people are struggling to be able to buy gas and food? The more you can do for yourself, the more resilient you are."

Fairbank estimates that she produces about 70 percent of the food her family eats. She sells farm-grown and -made products such as baked goods, jams, eggs and meat at the Hardwick, Greensboro and winter Montpelier farmers markets and through two online Harvest Hub markets. Broadfork also generates some income from rentals of a small on-farm camper bus and campsite for $49 and $29 a night, respectively, but Fairbank readily accepts farm labor hours in exchange for overnight stays.

She sets a high bar with her example of self-sufficiency. But, with a warm and encouraging manner, Fairbank notes that mastering even one food production skill is an achievement.

Fairbank had set up an outdoor classroom on her deck, in view of a squirrel performing circus-worthy moves to eat from a bird feeder, to demonstrate her most popular course: making fresh mozzarella. Two "students," camper bus guest and traveling musician Indigo Pearl and East Hardwick resident and filmmaker Elizabeth Rossano, were excited to give it a go.

A roughly $4 gallon of milk, Fairbank said, yields about $15 worth of cheese. The process, which takes only 30 to 45 minutes, is so gratifyingly speedy and shape-shifting that she has dubbed it "the party trick."

On a more practical level, making the mild, stretchy cheese is a great example of how a small investment of money and time can produce something most people would never think of making for themselves.

Fairbank was one of those people until she hit about 30. As a child, she and her mother lived with her grandparents in Salem, Mass. Her grandmother had grown up on a farm and was full of stories. "I grew up constantly hearing about 'Oh, on the farm, it was like this,'" she recalled. "I just dreamed of that."

But it wasn't until she visited an aunt who did traditional household tasks by hand, such as making candles, that Fairbank decided to venture into some of "those forgotten crafts, the old things that people used to do."

Lacking in-person mentors, Fairbank turned to books and dove in. "I think, really, the best way to learn is just to do it or to go see somebody else do it," she said.

After starting out with a small homestead in Athol, Fairbank found herself drawn to Vermont. It felt like the right place to realize her "back-to-land, out-of-the-rat-race" dream, she said. "All those clichés are 100 percent true for me."

Her then-adolescent sons were not as enthusiastic when she first showed them the Greensboro property. "This was a shack in a field when I got here," she said, gesturing to the tidy, shingled home. "None of the outbuildings were here. There were no gardens."

The seasonal cottage barely had electricity and running water. "It had 60-amp electric that clicked and ticked when you plugged anything in," Fairbank recalled with a chuckle. She did as much of the work herself as she could and worked remotely in her tech job for a couple of years to fund the transition.

The land, too, needed a lot of love.

After years of haying with no measures to add fertility, the soil "had been completely depleted," Fairbank said. "All the dirt that's here, we had to build from nothing."

The name Broadfork references a tool that is fundamental to Fairbank's regenerative approach. The large, wide hand tool with heavy tines renders soil loose enough to be worked and to absorb water without destroying the life below the surface. It "just disrupts and aerates enough," Fairbank said. The technique also minimizes the release of carbon into the atmosphere.

But before Fairbank could work the soil, she had to rebuild it. She described her homegrown fertility method succinctly, with a grin: "The poop stays in the loop." All of the animal bedding and manure is composted with green material grown on the farm and then applied to the gardens and to fields that have been seeded with deep-rooted prairie grasses.

"It's just so beautiful and green now," Fairbank said. "I'm gonna die on this hill."

Her hillside acreage would not work for commercial crops but makes good grazing land, Fairbank noted. The 15-year vegetarian started eating meat again when she started farming. "If I'm going to eat it, I'm going to raise it," she said.

Finishing up a quick tour of the farmstead, Fairbank pointed out overgrown rows of strawberry and blueberry bushes that she and Pearl would clean up over the next few days in exchange for a couple of nights' stay in the camper bus. 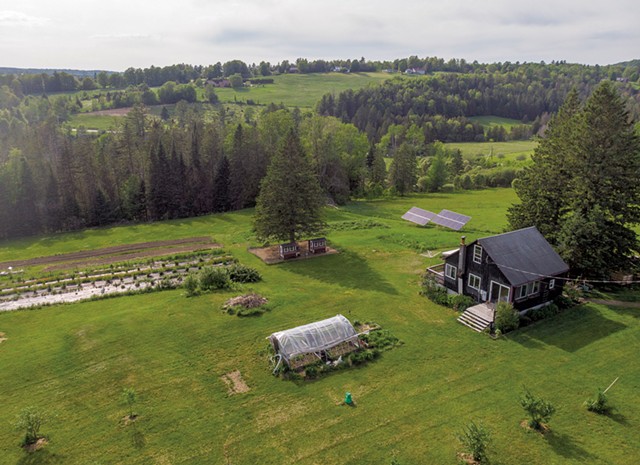 Fairbank popped into her small hoop house to snip some basil for the mozzarella the class was about to make. Inside, twine divided raised beds into squares, each holding different plants: herbs, peppers, eggplants, tomatoes, carrots, radishes and arugula. The technique, called square-foot gardening, is another favorite that Fairbanks teaches. For less experienced gardeners, she said, "it makes it a lot less daunting."

Back on the deck, she set a pot of local whole milk over a burner. "Raw milk works best," Fairbank said, "but gently pasteurized is the next best thing." Using supermarket milk would result in failure, she cautioned, because standard pasteurization destroys milk-fat structure.

A good thermometer is indispensable, she added, since each step of the process requires bringing the milk to a specific temperature. While heating the milk, one gently stirs in diluted citric acid and then vegetable rennet. "When I teach this at schools, the kids do all the steps," she said.

During the final heating to between 105 and 110 degrees, the milk visibly thickened into soft, custardy curds, which Fairbank lifted from the liquid whey into a strainer. "Next, we're gonna beat the heck out of it: knead, pull, stretch," she said.

The curd-free whey went back over the burner to heat up to 175 degrees, while Fairbank pressed as much whey as she could from the curds in the strainer.

Pearl and Rossano donned surgical gloves for sanitation and to protect their hands. "Everybody grab a piece and squeeze as much whey out as you can," Fairbank instructed. "Drop it into the hot whey for a few seconds and then scoop it out with the slotted spoon."

The next step involved squeezing, flattening and pulling the developing cheese and then several repetitions of the hot whey bath and aggressive massage. "This is the part where we get out our frustrations," Rossano said.

Magically, the curd became stretchy and shiny. Fairbank twisted hers into a long rope. Rossano's mozzarella ball looked remarkably professional for a first-timer. "You're a master," her teacher said.

The trio sat down to enjoy the results of their (minimal) labor. "We made that!" Pearl said.

"This is why I like to teach," Fairbank said. "If you can get excited about it, it's not a chore."

As they relished bites of fresh cheese with basil and tomato, the three discussed uses for leftover whey, including baking, fermenting vegetables and feeding pigs.

Pearl, who recently returned for a second bus stay in one month, said that camping at Broadfork delivered joys and renewed optimism.

"I believe Carol is doing something really right. She is doing the life she wants to live and she is making a living at it," Pearl said. "It gives me hope that there can be a harmonious and sustainable way of living that actually feeds us."