A year after an effort to restrict them, curbside gardens are still abloom in Burlington 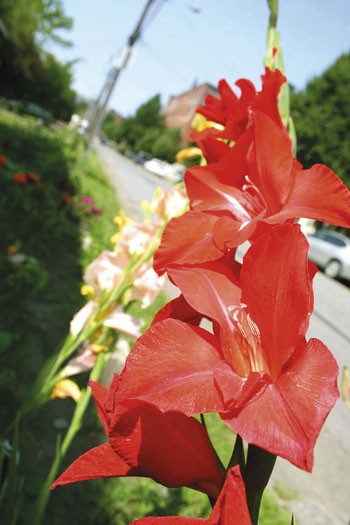 There aren't many summer vegetable stands in Burlington, but the city's neighborhoods boast a variety of roadside produce. Corn, cucumbers and tomatoes have sprouted in the city's greenbelts -- those narrow slivers of dirt between sidewalk and street -- as have clusters of boisterously blooming flowers.

Last summer, the city attempted to restrict greenbelt gardening. Concerned about motorists' visibility -- and the gardens' potentially damaging effect on nearby trees -- the Parks and Recreation Department backed a City Council resolution that would have placed limits on what and where residents could plant. But public outcry prompted councilors to reject the proposal.

Jim Flint, executive director of Friends of Burlington Gardens, was relieved when the measure failed. He estimates that some 200 landscaped greenbelts are scattered about town, many of them in the city's Old North End. "Greenbelt gardens are a real viable form of creative expression," he explains. "They empower people to be able to brighten their neighborhoods."

But Flint has some suggestions for would-be greenbelt gardeners. For starters, no matter how appetizing it may look, don't grow anything you plan to eat; street-side soil may contain toxins. "Unless you're on a very, very quiet side street," he says, "that's not something that we would recommend."

And he reminds gardeners to maintain their plots. "It's city property," Flint says, "and I think people need to respect that."

Bob Whalen, superintendent for park planning and development for the Burlington Parks and Rec Department, reports that his office has received zero complaints about the gardens this year, compared to about three dozen last summer. This season's heavy rains have contributed to a new problem, though -- fast-growing greenbelt lawns. "I think the issue we've found this year," notes Whalen, "is that some of them aren't getting mowed."

1) Corner of So. Champlain and King Streets

Dave Roberts tends two greenbelt gardens. He inherited one in front of his apartment on King Street when he moved in four years ago, and he started a much larger plot around the corner on South Champlain Street last spring.

Early one weekday morning, Roberts, a Friendly's waiter, is deadheading day lilies on King Street, plucking blossoms gone by, before rounding the corner to harvest some cucumbers growing beside the mailbox.

Roberts' South Champlain garden is flourishing. Vibrant marigolds, black-eyed Susans and squat sunflowers bloom in a weedless patch of dirt below a stop sign. A line of brilliant gladiolas arches into the street. Roberts also cultivates scallions, eggplants and basil. "I love pesto," he explains.

Roberts would like to have a community garden in the Intervale, but he doesn't have a car. Nor does he have space for backyard beds. "This is the only place where I can garden," he says.

But planting in a public space can be risky; a neighbor wiped out some of Roberts' hard work by parking his car on part of his garden last month. "When you're planting in the greenbelt, something's going to happen," he says, "and you have to deal with it."

Hilary Martin is a full-time farmer at Digger's Mirth in Burlington's Intervale, but she still helps her four housemates tend their greenbelt garden -- or the "sidewalk garden," as Martin calls it. "I like having a garden wherever we can have gardens," she says.

The residents of the two-story purple house grow a scraggly patch of sunflowers, bee balm and lilies, surrounded by a knee-high white picket fence. For the most part, Martin says, the comments she's heard from neighbors are positive.

William Leonard, smoking a cigarette on his porch across the street, confirms that assessment. "It's not a very good neighborhood, know what I'm saying?" he observes. Leonard notes that several of his neighbors grow flowers in their greenbelts. "I like 'em," he says. "I think they're pretty. It brightens it up."

There's not much to Alyx Lyons' curbside garden -- just some day lilies, a flowering lavender Echinacea next to a wooden utility pole, and Siberian irises that have already gone by. But when the lilies are blooming, as they are now, they make the off-lake side of the street a little spiffier.

Lyons says she started transplanting the lilies from the sides and back of her house years ago. "The grass doesn't grow very well there," she says of the greenbelt. "It's really sandy."

Besides, she adds, "The more flowers, the better."

It's hard to tell there's even a greenbelt at the elbow where Charles and Russell Streets meet; the sidewalk is almost completely obscured by Charley McClintock's garden. The dense mass of trees, shrubs and leafy stalks creates its own micro-ecosystem. "It's a jungle," McClintock marvels.

The Burlington mail carrier began cultivating the long, narrow strip in front of his house when he bought the property in 1989. Initially, he wanted to create a buffer between his house and the trickle of oncoming traffic from Charles Street. And he didn't want to cut grass. But he says he's since realized other benefits. The shade canopy created by trees such as his 20-foot-tall staghorn sumac lowers the temperature and blocks the summer sun. And run-off from the raised bed filled with smoke bush, hollyhock mallow and sunbeam coreopsis attracts earthworms, which McClintock scoops from the curbside gutters back into his garden.

He says that passersby often comment on the garden and seem to enjoy it, especially when he runs the fountain in his side yard that creates early morning rainbows in the leafy roadside tunnel. "I think that people who like the garden walk this way on purpose," he says.

McClintock advises fellow greenbelt gardeners to use lots of compost, keep the sidewalk clear, and remember that the snowplows come each winter. "They really can make a mess," he warns. But McClintock insists the effort he puts into his garden is worth it. "I believe in trees," he says. "I'm part pagan, and I believe in the grove as a site of paradise."

When Jean Wolfe moved into her apartment six years ago, the scrubby swatch of grass by the road made her sad. "It just looked very blah," says the baker, who works for Sodhexo at St. Michael's College. "It looked so deserted and abandoned." She pulls out an album and shows a picture to prove it.

The snapshot bears little resemblance to the colorful garden at her feet. Wolfe now grows deer tick, yarrow, black-eyed Susans and bright purple bachelor's buttons. Her 16-month-old grandson smells the flowers as she points them out. Wolfe is particularly proud of a new Morello cherry lupine she just planted.

"People are very impressed with the colors," she boasts. "I've been getting compliments left and right."

Some of her neighbors have been so pleased with the flowers that they've been picking some for themselves. Wolfe has planted a small handwritten sign among the blossoms. "Please do not pick flowers," it reads. "Watch them grow."

Jules Fischelman grows cherry tomatoes in a sculpted pile of soil on the greenbelt in front of his house. His mother made the hand-painted "Pitkin Street Garden" sign planted next to them.

But Fischelman, a past president of Friends of Burlington Gardens, says he's growing more than just food -- he's also cultivating community. "I really believe strongly that gardening is a great way to bring people together," he declares.

Fischelman remembers a day earlier this summer when a neighbor he barely knew spotted him toiling in the soil. "He saw me out there and offered some materials," says the IT manager for Vermont Energy Investment Corporation. "It was a little bonding moment."

Fischelman gleaned his gardening knowledge from summers spent toiling in his Intervale garden plot, and uses it on his expansive backyard and side yard flower, herb and vegetable beds. "Having a greenbelt garden allows me to share some of what I learned," he explains.

And he means that literally. Often people walk by and pick the tomatoes in his greenbelt. Fischelman doesn't mind. He says, "Knowing that happens makes me really happy."

This is the first year Lori Lewis has tried gardening in her greenbelt, and so far it's going well, she says. A handful of cornstalks towers 8 feet above the curb in front of the rainbow-colored doorway to Lewis' house. The greenery closer to the ground conceals a chile relleno, some tomatoes and a couple of yellow pumpkins. "We've got a nice one right in here," says Lewis, parting the prickly leaves with her hands.

The garden was actually Lewis' son Gabo's idea. He and his younger brother Zani wanted to grow pumpkins. They'd planted some in their shady backyard in years past, but none grew. The greedy gourds seem to prefer the southern exposure out front.

When Lewis first planted the garden, someone pulled up the thin, white metal separators that line its borders and threw them in the street. So far, that's been the only incidence of vandalism. "Since then, everybody has been so respectful of my garden," says Lewis. "It's been wonderful."

Though corn as high as an elephant's eye might bother some city officials, Lewis points out that she planted it several feet from the nearest driveway. She claims the vans that park at the foot of her drive pose more danger to drivers than her crops.

"I don't know why more people don't grow gardens in front of their houses," she muses. "It beats mowing."