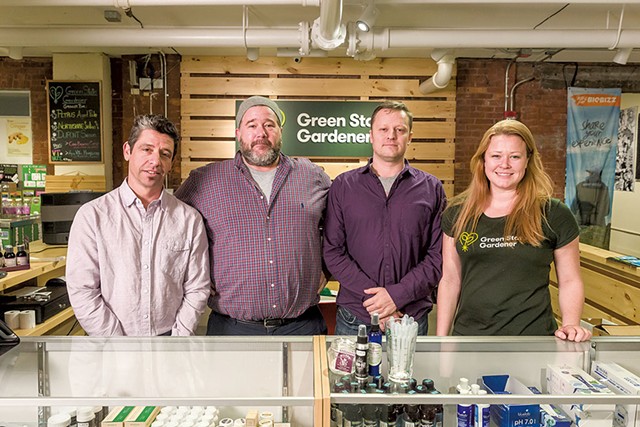 A curtain hangs behind the wood-paneled counter at Green State Gardener, concealing a simple office with a few chairs, a plastic table, laptops and harsh fluorescent lights. In this unassuming room, Dylan and Kelsy Raap and Chris Walsh are preparing to help cultivate the budding medical cannabis and hemp industry.

Green State's retail location on Burlington's Pine Street opened this past June. The store also has a strong national presence online, where it sells a larger variety of products. In addition to supplies for an array of DIY projects — making beer, bitters, mushrooms and hot sauce — the company retails special soil products and equipment for growing medical marijuana at home. That last category makes up the bulk of its sales.

As of February 2016, Chittenden County had 549 registered medical marijuana users; the surrounding counties had 751. Some of those individuals buy their medicine straight from dispensaries. Some choose to grow their own. That's where Green State comes in. The company offers discounts to cardholders as well as instruction.

"Most of the cardholders have never grown before," said Walsh, the team's general manager and a co-owner of Burlington nightclub Nectar's. "We really enjoy helping a beginner out."

If efforts to legalize recreational marijuana in Vermont had passed last year, Green State's customer base would have expanded significantly. While the team is optimistic that the state will catch up with their vision soon, they have an interim strategy: retailing cannabidiol, a completely legal product derived from the Cannabis sativa plant.

Commonly referred to as CBD, cannabidiol is one of more than 60 compounds in cannabis, according to a 2012 article in the journal Therapeutic Advances in Psychopharmacology. It's not psychoactive, which means it won't get you high. Green State carries the stuff in a variety of forms, ranging from cartridges for vaporizer pens to topical balms.

CBD is extracted from industrial hemp, which, in Vermont, is defined as a strain of the Cannabis sativa plant with a tetrahydrocannabinol — or THC — content of less than 0.3 percent. Refresher: THC is the bit that gets you stoned. Industrial hemp and marijuana share genes but act differently.

Speaking of genes, the Raap name is already familiar in the Vermont cannabis community. Will Raap, father of Dylan and Kelsy, founded Gardener's Supply. He's also one of the entrepreneurs in the Vermont Cannabis Collaborative, a group that aims to support legislation to facilitate commercial enterprises involving cannabis.

Will Raap belongs to Evergreen Capital Management, a group of eight investors interested in the Vermont cannabis market. Dylan Raap, 38, and Walsh, 50, who are also involved in ECM, are in the process of investing in a hemp crop grown by one or two local farms. Raap said contracts will likely be signed by the end of the month.

Most CBD products are patches, salves, sprays or pills containing extracts of cannabidiol in oil. They've been used to treat a variety of ailments, including seizure disorders, autism, arthritis, inflammation, sleep disorders and anxiety.

One Green State customer is a Chittenden County teacher who uses CBD to treat inflammation. The teacher, who prefers not to be named, told Seven Days in a phone call, "It's misunderstood. [But] for me, I'm 64; I have to be on my feet all day. I have some issues with arthritis, and [taking CBD] has made a huge difference for me. My joint inflammation has been drastically reduced."

The teacher said she had been using the product in a vaporized form for six months and plans to continue doing so, although she might also try out the sublingual oil-based capsules.

The Green State crew is interested in bringing CBD to a wider Vermont audience. "In general," CEO Dylan Raap said, "we've seen an incredible receptivity here to CBD, and we see that as the vanguard for this emerging world of medicinal plants."

While Green State can help customers choose a product for their needs, the partners make it clear they are not doctors. They present themselves as entrepreneurs who've seen CBD help people and want to share that information.

A three-person e-commerce team remains located at Gardener's Supply, but the plan is to move those employees to a lounge-like room in the company's new retail space, which would also host educational programming and foster customer connection.

Walsh described the new storefront as a "hardware store" environment where he's already seen productive networking going on. "I'll be sitting up front," he said, "and one person will walk in, and they'll start exchanging ideas." Dylan Raap added, "Those are the best conversations."

Right now, the lounge's sole occupant is an Oriental rug. The couch arrives this week.

Green State is looking into holding office hours for a naturopath open to prescribing medical marijuana. "We still don't know who [the naturopath] is," said Kelsy Raap, 33, who manages marketing for the group. "But we have a list of [practitioners] that are receptive."

She also plans to reach out and invite potential user groups into the space, such as parents of children with autism, cancer patients and people with epilepsy. "Our thought is to use this as a comfortable meeting room for discussions," she said.

Green State has already hosted a few events in the shop, which can hold about 50 people. The first was a talk on getting a medical marijuana card in Vermont. "We had an excellent turnout for that," said Walsh. People often flash their cards when they enter the shop, he noted, and he responds by showing them his.

That has changed the dynamic, Walsh said. "It's a comforting thing, where people feel that they're in a safe environment where they can talk openly about growing their own medicine."

The next event, planned for this winter, will educate participants on "how all CBD is not the same," said Dylan Raap. "There's a big difference between stuff that's sourced in Europe as a by-product of the industrial textile industry, versus what's grown here for the specific purpose of medicine."

He's not alone in questioning the value of imported products. In 2014, Project CBD, a California-based nonprofit that disseminates research on the medical uses of cannabidiol, prepared a report titled "Hemp Oil Hustlers." It found that a group of related companies sells industrial hemp products contaminated with silver, arsenic and harsh chemicals. Partly to blame is the lack of established standards for these products, and it doesn't help that hemp excels at soil remediation, aka sucking up chemicals from the ground. What's good for cleaning up irradiated soils in sites like Chernobyl is not so great for a sick child.

"There's a lot of snake oil out there," Dylan Raap said. He added that Green State has vetted the products it currently carries. "But for every one of these [safe products], there are 10 fraudulent operators. Sourcing is important."

Green State continues to add to its inventory, which currently contains about 25 products. One of them is Green Mountain CBD, made in Hardwick. Among the most affordable on the market, it's a capsule containing a coconut oil-based hemp extraction.*

Mary's Medicinals is another line the company offers; according to Kelsy Raap, that company is one of the better-known distributors of CBD products and is rigorously tested for quality control.

A dearth of scientific study still stands in the way of those who would tout the benefits of cannabis. The federal government effectively banned the growing of hemp in 1937. But, Dylan Raap said, the substance "has untold health potential. We're just figuring this out due to the moratorium on research in this country."

In 2014, President Barack Obama allowed state agriculture departments and higher education institutions to cultivate hemp for research purposes. Vermont has since established a state hemp registry through the Agency of Agriculture, Food & Markets.

While some locals grow hemp for the purpose of extracting CBD, others use it as a source of animal feed, rope, textiles and more. One of the founders of the University of Vermont's cannabis science and medicine program, Kalev Freeman, recently registered with the state to cultivate hemp; he's keeping his options open. Dylan Raap is registered to grow hemp in three Chittenden County locations.

Ideally, the owners of Green State would like all of their wares to be grown and manufactured in Vermont. "We're looking to expand this world of therapeutic medicinals that we see as an industry that Vermont is uniquely suited to take forward," said Dylan Raap, "just as we've done with other farm-to-plate movements."