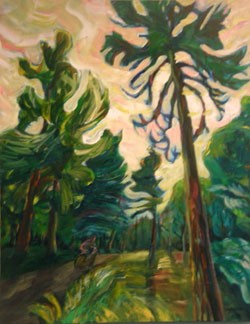 The “green man” is a symbol of rebirth, which makes one wonder why this popular figure in architecture and the decorative arts isn’t a woman. But apparently Mother Earth needs a counterpart, and the disembodied head of a god-like male wreathed in leaves seems to do the trick.

Though the green man is probably of pagan origin, he was a ubiquitous symbol in European ecclesiastical art from the 11th century on, and appeared with similar frequency as a gargoyle in wood and stone relief carvings. The benign, placid face typically peers from dense foliage, as though coming up for air after having been buried in leaves. Either that or he’s let his camo get out of control.

For such an ancient, unassuming guy, the green man has made an unusually splashy contemporary appearance at Studio Place Arts in Barre. Maybe the seven artists who’ve spontaneously invoked him in paintings and sculptures for the group exhibition “Show Us the Green” think he’s made of money and hope he’ll change their fortunes. Or maybe they just see the green man as an emblem of spring.

Whatever the reason, the woodland god is omnipresent in the show. In the painting “Priest of Green Man,” Janet Van Fleet plays his livid face off a gold-foil halo, lifting his station from mere decoration to the realm of sainthood. Georgia Landau gives him a naturalistic appearance in her clay sculpture, while Elizabeth Kendrick recreates what is known in green-man parlance as a “bloodsucker head” in her collage encased in encaustic. Here, foliage emanates from the green man’s every facial orifice — flowers, leaves and even music spew from his mouth, while other bits of greenery seem to fly from the eyes and nose. Kendrick has brought the static, classical figure to life: This green man looks as though he might leap from the image.

Men aren’t the only green things at SPA, however. Nature in general is well represented in landscapes and abstract paintings. In Marc Awodey’s lush painting of a brooding landscape, entitled “Frog Pond,” the eye comes to focus on a fluorescent-green strip, a recently mown field, bordering a pond and foreboding forest. Karen Dawson makes pine trees seem as awe-inspiring and grand as any skyscraper in her painting “Rockpoint.” Here, perspective forces the viewer to examine the treetops that pierce a lurid yellow, pink and white sky. At the base of the painting, a lone bicyclist rides along a dark path between the trunks, peddling without apparent knowledge of the drama playing out above her.

Jill Herrick-Lee’s “American Dream” is a “Home Sweet Home” icon made from coin sleeves. She carefully sewed the dime, nickel, penny and quarter wrappers together in a quilt-style pattern. The colorful lines in the sleeves are cleverly used to differentiate, say, the house’s blue chimney (nickel wrappers) from its red roof (penny wrappers). Herrick-Lee reduces warm-and-fuzzy feelings about comfort to a cold calculus of dollars and cents.

Going in a different direction, Marie Davis conflates the dynamism of the natural world with domesticity in her mini-ature polymer clay piece “Tree Couch.” Here a Victorian divan becomes the base of a tree made of copper wire, complete with tiny, striped leaves made of clay.

Little green men get their due in the SPA show thanks to Rob Millard-Mendez. His “Puppet for an Allegorical Play About Covetousness” is a segmented wooden figure — painted kelly green, natch — that looks like a cross between an alligator and an alien. The “puppet” has a long, narrow head with 10 eyes and a cavernous maw featuring fake coyote teeth. It hangs upright, arms dangling limply like a mannequin’s. The fingers on each hand feature large fishhooks. Why hang on by your fingernails, the piece seems to suggest, when you can use these instead?

Ironically, “Show Us the Green” is a reminder that money isn’t everything. The artists seem to have rejected the reference to good old “lettuce” implied in the exhibit’s title in favor of the good life. Despite some timely allusions to worldly gain, it’s nature that dominates here, in the form of enduring landscapes and the faces of enigmatic green men.