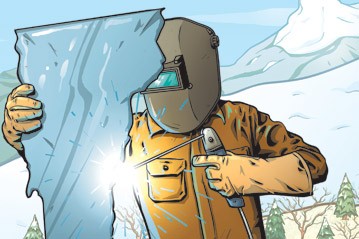 The Northfield office of corporate furniture manufacturer WallGoldfinger is papered with lists highlighted with the names of the country’s top architecture, finance and law firms. Those many blazes of yellow — all WallGoldfinger clients — are the reason for the company’s lasting success.

WallGoldfinger’s stock-in-trade is high-end, custom office furniture. Boardroom tables range from $7000 to $100,000, depending on the technological bells and whistles that get attached. This isn’t the stuff you find at Staples.

In addition to boardroom tables, the company makes reception desks, credenzas, lecterns and technology terminals for the Wall Street set and other power players. In fact, many Wall Street firms, including Goldman Sachs, Merrill Lynch and UBS, are brokering deals at tables designed and crafted by WallGoldfinger.

The company, founded in 1971 by woodworkers John Wall and Michael Goldfinger, never set out to make corporate furniture. Wall and Goldfinger primarily crafted residential furniture for showrooms in New York City. There they met renowned textile and furniture designer Jack Leonard Larson and began producing pieces for him. Through Larson, the pair forged relationships with architects all over the city working on big-ticket projects.

“At a certain point we said, ‘We have to go to New York. That’s where the money is,’” Wall says.

Since entering the world of corporate furniture, WallGoldfinger has racked up hundreds of marquee clients — Anheuser-Busch, Frito-Lay, IBM and Sony Music, to name a few — largely on the recommendations of leading architects and designers.

It’s those architects who have pushed the WallGoldfinger brand throughout the corporate world. As a result, the company has pieces in the Federal Reserve building and the United Nations in New York City, the CIA offices at Langley and the Situation Room of the White House. Their work fills conference rooms at AIG, Bank of America, Citigroup and KPMG. WallGoldfinger is currently producing new trading desks for the floor of the New York Stock Exchange.

Along with vigilant marketing — keeping their name in front of architects is essential — the company owes its longevity to a loyal, flexible and smart workforce, according to Wall. The average length of employment for the company’s 45 employees is 11 years. And because they are producing custom pieces, the woodworkers have to be creative problem solvers as well as skilled tradespeople, Wall says.

All that marketing and word of mouth has paid off. WallGoldfinger produces 500 to 700 pieces for roughly 90 clients annually. Last year, business was up 20 percent. This year, it’s on track to grow by 30 percent. That’s no small feat considering WallGoldfiinger’s modest roots.

“I like that we can be here in Vermont in a real rural area and create something that’s not rote, dumb stuff,” Wall says.