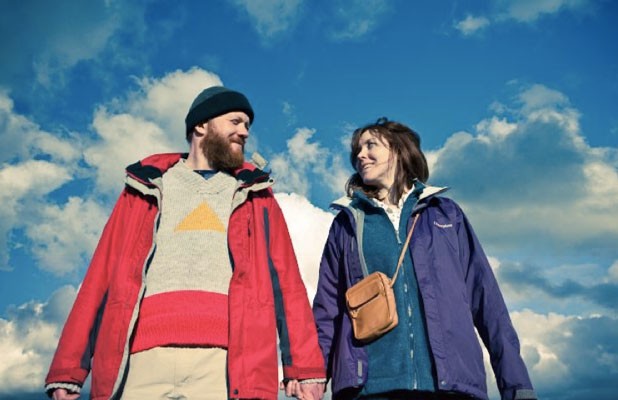 When new lovers Chris (Steve Oram) and Tina (Alice Lowe) set out on a road trip across England, they make a picture of premature domestic bliss. She knits herself sexy scanties in their cozy trailer. He scribbles notes for a literary masterpiece and appoints her his “muse.” The only blots on the couple’s idyll are the other tourists they keep running into — slobs or snobs who just don’t show them proper respect. When these strangers get irksome, Chris has a habit of brutally murdering them. And Tina isn’t sure she minds.

Imagine one of Mike Leigh’s slice-of-life comedies crossed with Natural Born Killers and you have Sightseers, the latest from Ben Wheatley. The UK director drew deserved festival attention in 2011 with Kill List, a hybrid of kitchen-sink drama and hit-man thriller with a bizarre twist.

Sightseers is nearly as inventive, but it’s a comedy. A very dark one: Not for nothing does “Tainted Love” play over the opening credits. While Chris and Tina are undeniably sociopaths, their familiar foibles make them the sociopaths next door. (“He wasn’t a person; he was a Daily Mail reader,” Chris says of one of his victims.) Actors Oram and Lowe developed the characters based on memories of their parents on road trips, giving Chris and Tina’s relationship a believability that makes their antics both funnier and more disturbing. It’s not for everyone, but it’s a hard film to forget.

And, for now, locals can see it only at the Green Mountain Film Festival. Sightseers, which plays on March 22 (8:30 p.m.) and March 26 (8 p.m.) at the Savoy Theater in Montpelier, is one of 65 flicks the 16-year-old fest will bring to town starting this Friday.

Now run by Savoy owner Terrence Youk, the fest has a somewhat smaller local component than in years past; don’t look for a showcase of Vermont-made shorts. But do look for intriguing features from around the world, few of which have reached our screens.

For instance, Reality, the latest from Gomorrah director Matteo Garrone, takes a skewed look at reality-TV stardom. Oscar-nominated War Witch is the magical-realist tale of an African child soldier. On the Road retells Jack Kerouac’s American odyssey, while Beyond the Hills, from Romania’s Christian Mungiu (4 Months, 3 Weeks and 2 Days), is a more harrowing odyssey through the heart of an unforgiving faith. In Ginger and Rosa, Orlando director Sally Potter offers a tale of radical coming-of-age in the 1960s.

The GMFF has plenty of documentaries, too. Some fire up audiences (A Place at the Table, about hunger; The Revisionaries, about a creationist trying to steer public education); others take them on unlikely journeys (Kumare, in which filmmaker Vikram Ghandi impersonates a guru and finds himself becoming one). 5 Broken Cameras is a searing, first-person view of conflict in the West Bank (See my Movies You Missed DVD review at sevendaysvt.com.). Girl Model follows an impoverished Russian teen lured into the fashion industry with promises of fame and fortune. Room 237 explores the cult that has developed around Stanley Kubrick’s The Shining — which, naturally, will also be screened, with commentary from a visiting Kubrick scholar.

Animation fans won’t want to miss Don Hertzfeldt’s experimental It’s Such a Beautiful Day, which some critics have called the best film of 2012. The choices go on and on — you can find them, along with the schedule and ticketing information, at gmffestival.org.

And try to avoid too-happy couples on your next RV vacation.