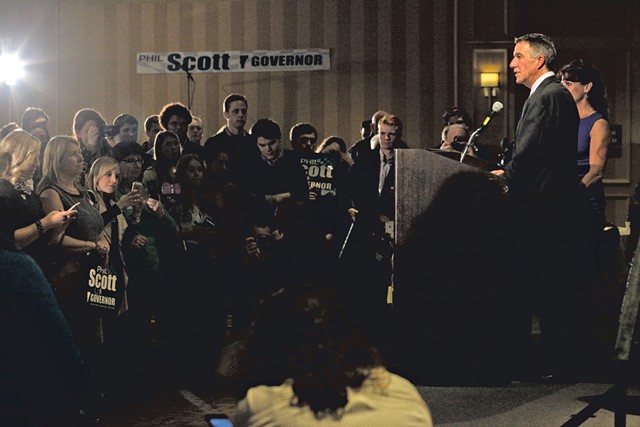 The 58-year-old lieutenant governor and construction executive is set to take office in the nation's most liberal state, where retiring Gov. Peter Shumlin and fellow Democrats have controlled the state capital for six years.

"I can't believe we're here tonight," Scott told a crowd of Republicans late Tuesday night at the Sheraton Burlington Hotel. "You know, 20 years ago I didn't have a political bone in my body. So to say this blue-collar kid from Barre never expected this to happen is an understatement."

By late Tuesday night, Scott was leading Democratic former transportation secretary Sue Minter by roughly 9 percentage points with most precincts reporting. Though clearly crestfallen, she danced her way to a stage at the Burlington Hilton with family, friends and campaign staffers.

"It has been a long night, and it's been an amazing journey," Minter said.

The Waterbury Democrat said the night's results would not end "our continued work to build a brighter future for Vermont."

"I feel so much gratitude and appreciation," she said. "No regrets. Total pride. Onward."

For his part, Scott extended an olive branch to the Democrats who will continue to hold the Vermont House and Senate.

"In my administration, there will be room for everyone," he said, including "Republicans, Democrats, Progressives, independents and no label at all."

Scott pledged to work for the "thousands" of Vermonters who had shared stories of adversity with him, via mail, email and heartfelt conversation.

"There is no doubt the challenges are real, but the opportunities are also great, and together we're going to move our state forward for these Vermonters and all Vermonters," he said.

The news wasn't all bad for Vermont Democrats.

Sen. Patrick Leahy (D-Vt.) easily defeated Republican Scott Milne, winning a historic eighth term to the United States Senate. The 76-year-old Middlesex Democrat is only the fifth person in U.S. history to do so.

The Associated Press called the race for Leahy at 6:59 p.m., a moment before the polls closed. A little more than an hour later, he took the stage at the Burlington Hilton as the Grateful Dead's "Truckin'" played on the public address system.

"It has been a long, strange trip, to quote Jerry Garcia," the senator said.

Referring to the caustic, anti-incumbent race Milne ran, Leahy said, "Let's return decency in place of the negativity we see ... Let's show the nation how different we are."

Just after midnight, Republican Randy Brock conceded the lieutenant gubernatorial race to Sen. David Zuckerman (P/D-Chittenden), the Democratic and Progressive nominee. A 45-year-old organic farmer from Hinesburg, Zuckerman served 12 years in the Vermont House and four in the Senate. He'll be the highest-ranking Progressive in state history.

Donovan's victory came four years after he narrowly lost to Sorrell in a hard-fought Democratic primary — a race he referred to in his victory speech Tuesday night at the Burlington Hilton.

"Four years ago we sought this office to fight to level the playing field for all Vermonters," Donovan told the crowd. "We have stayed the course. We have kept the faith. We have finished the race. And we have prevailed!"

Congressman Peter Welch (D-Vt.) handily defeated Liberty Union nominee Erica Clawson to win a sixth two-year term in the U.S. House. He told Democrats at the Burlington watch party that he was "ready to go back" to Washington, D.C., to help fix a "broken" Congress.

In Burlington, two hotly contested local ballot items passed. Voters approved Question 3 — the creation of a downtown zoning district that will allow buildings up to 160 feet tall — by a margin of 54 to 46 percent. On Question 4, regarding a $21.8 million tax increment financing bond for public improvements around the new district, voters said "yes" by a tally of 59 to 41 percent.

The approval of both means developer Don Sinex can go forward with his proposed $250 million redevelopment of the Burlington Town Center.

The Washington County race was too close to call, with incumbent Sen. Bill Doyle (R-Washington), the dean of the Senate, trailing former Democratic representative Francis Brooks for the third seat in the three-member delegation. Sens. Ann Cummings (D-Washington) and Anthony Pollina (P/D-Washington) were both reelected in that district.

With Election Day in the rearview mirror, the real work now begins. Governor-elect Scott takes office in just 57 days — on January 5, 2017. Between now and then, he will have to build a new state government capable of seamlessly replacing the outgoing Shumlin administration.

It is no small task.

"You set the stage for how you're going to govern by what you do in the transition, so it's really important that you make a good impression," says Liz Bankowski, a veteran Democratic hand who managed the transitions of governors Shumlin and Madeleine Kunin. "And you don't have a lot of time to do it. You wake up the next day, and there you are."

Says Tim Hayward, who ran Republican governor Jim Douglas' transition, "It goes very quickly, and it is a very intense time, a very exciting time and a very important time."

So what's next for the governor-elect?

Name a transition team: Scott said late Tuesday in an interview that he would name a team Wednesday afternoon to coordinate the frenetic activities of the coming months.

Secretary of Administration Trey Martin, whom Shumlin has tasked with coordinating his exit from office, will hand over the keys to 144 State Street — a drab Montpelier building down the street from the Statehouse which Martin has fitted up with phones and computers. The team will have a budget of $65,000, most of which will likely go to interim personnel. If the new governor wants to get paid before inauguration, it has to come out of that sum.

With the help of outgoing administration staff and cabinet members, Martin has been preparing a "transition book" to hand over to the governor-elect. It will include a broad overview of ongoing state government functions, as well as detailed information pertaining to specific agencies and departments.

"The transition is about good governance," Martin says. "I feel that it's my job to make sure that they have a clear sense from this team of what we perceive as the top priorities, the medium priorities and the day-to-day services we provide."

Appoint administration leadership: Scott's most important appointments will be secretary of administration and chief of staff. The former will guide the budgeting process and supervise the cabinet. The latter will oversee Scott's political staff on the fifth floor of the Pavilion Building.

Douglas, who moved from the state treasurer's office to the governor's office in 2003, says he knew even before his 2002 campaign ended who he hoped to appoint as chief of staff and secretary of administration: Hayward and Mike Smith.

"It may sound presumptuous ... but when you feel you have a shot at it, you have to start some preliminary thinking about who will help you out," Douglas says.

Thirteen days after Shumlin was elected in 2010, he named Bill Lofy as his chief of staff and Jeb Spaulding as his secretary of administration. That set off another talent search, because Spaulding had to give up the term he'd just won as state treasurer.

Get to work on the budget: Governors are required by statute to deliver a budget to the legislature by the third Tuesday it's in session. That leaves little time to get the job done.

According to Martin, the Shumlin administration started the budgeting process "a little earlier this year than we have in years past" so that it can hand off a menu of options to the next governor and administration secretary by the third week of November.

"Depending on the way the ball bounces, the people coming in may have new priorities," he says.

Douglas remembers his first budget as relatively painless because, he says, he and outgoing Democratic governor Howard Dean "were pretty much on the same page."

"Howard was pretty thrifty, too, so I don't recall stress in putting that first budget together," he says.

But if this year's budget gap is as large as those of the past few years, the governor-elect will likely have a different experience.

"Clearly it's going to be a trying time for the budget," Hayward says.

"You're going to hear from people quickly," Bankowski says. "Your phone starts ringing right away. Your email is completely filled with applicants."

Complicating matters is that some incumbent cabinet officials will want to stay, though traditionally all appointed officials tender their resignations.

"Everybody in this administration serves at the pleasure of this governor," Martin says, adding that even he has no idea what he'll be doing come January 6. "I don't know who's going to be here and whether I will or I won't."

Develop a policy agenda: After winning the governorship, one has to convert "all those promises you've made in the campaign" to policy proposals, Bankowski notes. That means filling in the details by the time the legislature convenes in January.

Scott will also have to deal with a host of preexisting policy problems, each of which comes with its own pressing deadlines: how to fund the federally mandated cleanup of Lake Champlain; what to do about Vermont Health Connect; whether to continue Shumlin's pursuit of an all-payer health care system; how to meet the state's underfunded pension obligations; and how to implement Shumlin's universal prekindergarten initiative.

Start writing the inaugural and budget addresses: This is a chance for Scott to speak to the entire state, not just those who voted for him during the election.

"It sets a tone. It's a new beginning," Douglas says. "It's time to set forth in a more formal setting what your plans and hopes are for the state. Obviously, each candidate has been talking about them for some time, but it's a different context."

Fill out the administration and the 5th floor: According to the Department of Human Resources, 68 agency secretaries, department commissioners and deputies are appointed by the governor. Another dozen fill political roles in the governor's office, including communications director and legislative liaison.

Some governors like to play a direct role in all the hiring, while others allow an incoming natural resources secretary, say, to pick the department-level commissioners who report to him or her.

"You want people who have administrative skills, communications skills, integrity and someone with whom you have or can develop a good working relationship," Douglas says. "It's not always easy, in some respects, because people aren't always sure how long the job will last."

Get ready to party: With most inaugurations come an inaugural ball. Says Bankowski, governors-elect don't have the time to ponder such frivolous affairs, so it's best to hand this one off to a family member or friend.

Transitions aren't easy, Bankowski says, but Scott can count on at least one thing: "Vermonters will do everything they can to help the new governor be successful."