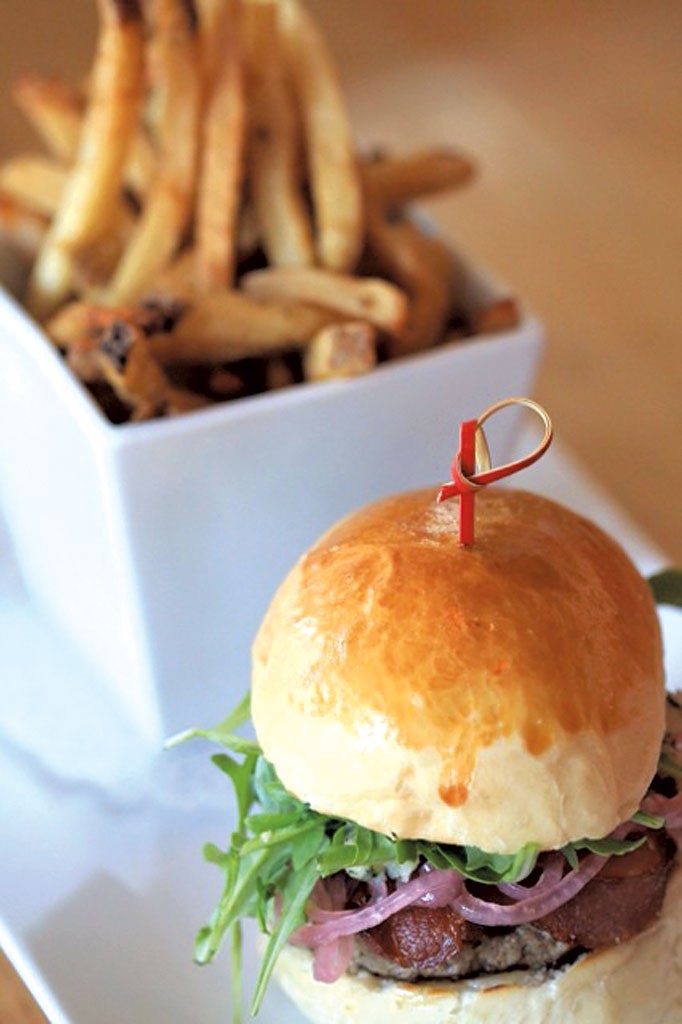 Chef Darrell Sawyer started his career as a teenager at Perry's Fish House in South Burlington. He attended culinary school in California and made pastries for star chef Nathan Lockwood at Seattle's Altura. Now, Sawyer is back home in Vermont slinging burgers.

This isn't the sob story it may sound like. Sawyer is the chef at the helm of Grazers, the latest project of Sam, Peter and Paul Handy, the brothers behind Vermont Tap House; and Sam Handy's son, also named Sam, who owns Burlington's Scuffer Steak & Ale House with Pat Stewart and Don Johnson.

Located at 202 Cornerstone Drive in Williston, beside the Majestic 10 Cinemas, wood-paneled Grazers fills the pre-movie dining hole left by Three Tomatoes Trattoria when it closed early this year.

"I've always had this dream of different types of burgers and interesting toppings — not masking the flavor of the meat, just kind of complementing it," Sam Handy Jr. says.

Even before it opened on September 30, Grazers' website proudly proclaimed that its burgers had been "voted the best burger in the state, already." Yes, it's a joke.

The menu offers 10 different takes on the burger served on soft, challah-like buns. Beef from Shelburne-based Vermont Country Farms, sourced from 14 farmers around the state, appears in sandwiches such as the Full Belly burger, composed of a beef patty, two slabs of braised pork belly, allspice aioli, spinach and cheddar. The Hog is ground pork topped with roasted apples, spicy maple mustard and local cheddar, while the Lamburger is covered in green olives, artichokes, garlic aioli, spinach and goat cheese.

Sawyer developed a milkshake menu to accompany the burgers; current choices include chocolate-hazelnut, salted maple and the Creamsicle-like blood-orange shake.

Diners looking for a stiffer drink can hit up the Grazers martini bar, which serves enough sweet cocktails to make a college girl swoon. But there are more refined options, too. The Local Harvest mixes vodka with fresh basil, lime and sliced cucumber, and Grazers' gimlet and Gibson are made with Vermont vodka.

The original print version of this article was headlined "Martinis & Meat"