Gray Decries ‘Dark Money’ — But Has Previously Benefitted From It 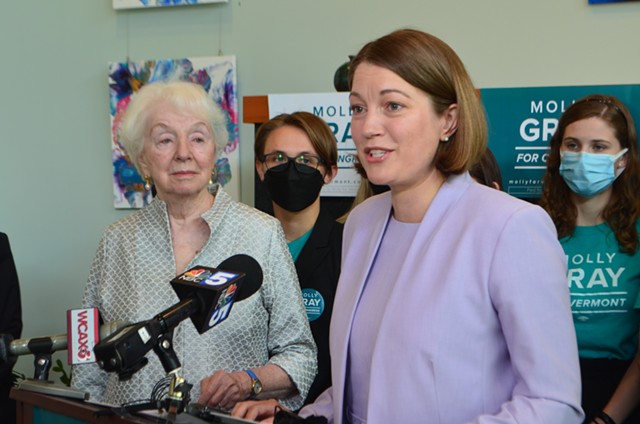 In a fundraising email on Wednesday, the campaign for U.S. House candidate Molly Gray went after her chief Democratic rival, Becca Balint, painting an ominous picture of the primary campaign landscape.

“If our opponent has it her way, dark money will flood the airwaves and drown out the voices of Vermonters,” Gray’s campaign manager, Samatha Sheehan, wrote. “We don’t know how soon they’ll come for Molly — or how much they’ll spend — but we know now that Super PACs have been invited in by our opponent and we need to be ready.”

Sheehan was responding to allegations that Balint, Vermont's Senate president, had used a controversial tactic on her website known as “redboxing.” The practice involves creating a webpage, usually using a red box as a signal, to alert super PACs to information the campaign would like to see used in an advertisement — without directly coordinating with super PACs, which is illegal.

Balint's Campaign Site Appears to Use Questionable 'Red-Boxing'
By Sasha Goldstein
Politics
Balint’s website appeared to have such a page, but it’s since been removed. Both Balint and her campaign manager, Natalie Silver, denied using the tactic and, at a debate last week, Balint answered a question from Gray by agreeing to denounce any super PAC spending in the race. As of Friday, no super PACs had advertised for either candidate.

One wouldn’t know that from reading the Gray campaign email.

“We cannot let Vermont become a playground for crypto billionaires who think they can decide the outcome of this election,” the plea for donations reads. “It’s up to us, Vermont voters, to decide who will work for us in Washington, not Super PACs.”

Gray, Milne Spar Over Super PAC Support
By Colin Flanders
Off Message
But what the email didn’t mention is that Gray benefitted from a dark money super PAC that spent approximately $70,000 on television ads in 2020 during her campaign for the position she now holds, lieutenant governor. The 30-second clip from the Alliance for a Better Vermont Action Fund attacked Scott Milne, her Republican opponent, as “wrong for Vermont.”

Wednesday's campaign email does say a GOP super PAC spent $200,000 in that race "to try to take [Gray] down." Sheehan's email says Gray "didn’t welcome Super PAC spending then, and she doesn’t now."

Asked about the attack on Milne, Sheehan declined to comment.

Silver acknowledged that a political action committee called Guarding Against Pandemics has endorsed Balint and made a financial donation to the campaign. Guarding Against Pandemics is not a super PAC and can make such donations. The group "advocates for public investments to prevent the next pandemic" and has also endorsed U.S. Rep. Peter Welch (D-Vt.) in his campaign for U.S. Senate.

An associated super PAC, Protect Our Future, has also endorsed Balint, but Silver said she was unaware of its backing until Seven Days sent her a link to the group's website. It was created by crypto billionaire Sam Bankman-Fried and has spent heavily in some Democratic primaries around the country. The group has also endorsed Welch.

In response to questions about the Gray campaign email, Silver sent a statement expressing disappointment that the message "intentionally misstated Senator Balint's beliefs on campaign finance.


The statement continued: "It is our hope that this campaign can be about the issues Vermonters care about, and that the negativity, intentional distortion, and personal attacks will stop ... We hope that for the remainder of this campaign, everyone in this race will speak honestly about one another, and even if it is critical, we will do so with the respect and integrity Vermonters expect from their leaders."

Correction, June 18, 2022: A previous version of this story misstated the amount a super PAC spent on anti-Milne TV ads.