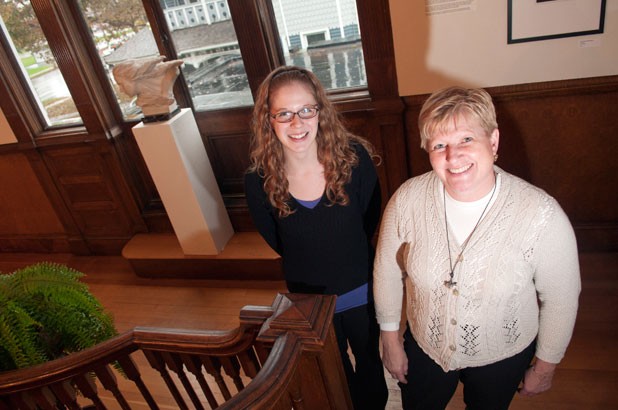 Take the current one, titled “Enduring Traditions: The Art of Memorials From the Marble Valley,” which highlights the mansion’s historical relevance — and spooky factor — tenfold. The exhibit, which comprises traditional gravestone-carving patterns, historical photographs of the Vermont Marble Company in Proctor and the work of contemporary Vermont stone carvers, was curated by Roger Williams University art professor Anne Tait. She began investigating the history of the state’s carving industry when she noticed buildings and memorials all over the world that could be traced back to Vermont.

The photographs, tombstone patterns and memorials — including an original maquette of Franklin Delano Roosevelt’s Hyde Park, N.Y., gravestone — fill four of the mansion’s downstairs rooms. Walking through them feels like wandering through a cemetery, the bygone names (Rheta Marie Gruse) and mysterious imagery (babies, pointed index fingers and sheep) offering glimpses into the stories of the dead.

And then there’s the story of the mansion itself.

Rutland businessman George Chaffee built the home, which his family called Sunny Gables, between 1892 and 1896. The imposing structure has Middle Eastern architectural features, such as a Syrian arch over the front entrance. At the time, explains Mitiguy, “It was fashionable to show you were worldly.” Inside, the home has an asymmetrical floor plan, parquet floors, gothic windows and two turrets.

The Chaffee family lived there until the mid-1920s, when, Mitiguy says, the house was boarded up. Two of George’s grandchildren, Suzanne and Rick, were Olympic alpine skiers; in the 1970s, Suzanne became better known as “Suzy Chapstick” after a stint as spokeswoman for the lip-balm brand.

Sunny Gables was reopened in 1961 for a Rutland Area Arts Association exhibit in celebration of the city’s bicentennial. The group continued to use the space and purchased it in the 1980s. That’s when the building was rechristened the Chaffee Art Center.

The mansion still contains Chaffee family relics, including a 91-year-old Christmas cactus and exotic antique furniture, such as a set of dark wooden chairs with gnomes carved into their legs and backs.

Visitors can see where the Chaffees’ part of the house ended and the servants’ quarters began: Doors separating the two zones have fancy decorative knobs on the family’s side, plain knobs on the other. One impossibly tall door in the servants’ area leads to a dark attic filled with abandoned art and a box of the Chaffee family’s old clothes, not to mention lots of spider webs. The art-center staff has been told that a maid once hanged herself from the rafters in one of the turrets. “Every once in a while, the window will pop open by itself,” reveals Kaminski.

In the 50 years the art center has been housed there, Sunny Gables has never been renovated. Mitiguy says she’s working on a capital campaign to update the building’s electrical systems and improve handicapped accessibility. She’d also like to transform an upstairs room currently used for storage into a digital-art studio. The downstairs room with the Christmas cactus is set to become a kids’ painting studio after Thanksgiving.

The building needs some work, to be sure, but Mitiguy says the art center can’t afford to be anywhere else. There’s no mortgage to pay off, for one thing. Still, when oil prices shot up three years ago, the Chaffee closed for eight months and the art association nearly sold the building. It didn’t because the community fought to keep the art center going in Sunny Gables, says Mitiguy.

And the Chaffee, in turn, has worked to keep its offerings relevant to the Rutland area. “We need to reflect the community we’re in,” says Mitiguy. A recent show of photographs by Aldo Merusi, the Rutland Herald’s chief photographer from 1937 to 1974, for example, brought in many people who wouldn’t normally visit an art gallery, she says.

The current exhibit has attracted community members with ancestral ties to the marble industry, many of whom are familiar with the scenes depicted in some of the historical photographs. In one from 1900, men are carving the ornate tops of Corinthian columns in a Vermont Marble Company workshop. Each worker wears a cap to protect his coif from the marble dust, which was said to make hair brittle. Another photo from around the same time shows the Proctor mill yard from a distance: Stacks and stacks of blocks behind warehouse buildings look like a miniature marble metropolis.

Curator Tait “has learned more about our area than many of us know,” says Mitiguy. Tait has also already chosen the headstone she’d like for her own grave. The 1900 pattern is displayed in one of the gallery rooms: A hand emerging from a cloud points its index finger toward the ground while clutching a broken chain.

The image is a delightfully creepy addition to a mansion already well suited for ghosts, and the exhibition is perfect for this ghoulish time of year.