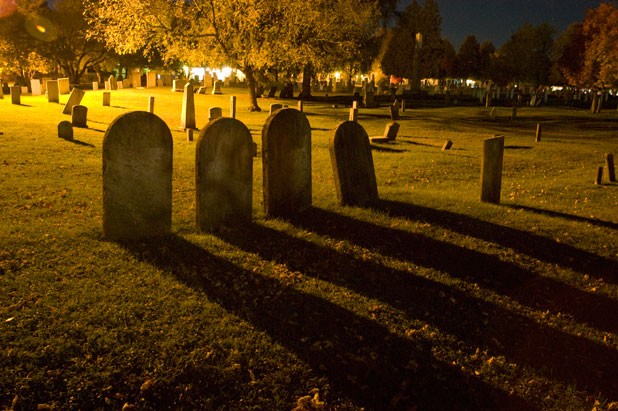 A.V. Bowker was set to graduate from the University of Vermont College of Medicine in 1879. A promising student, Bowker had landed a gig assisting Leroy Bingham, one of the school’s top professors of anatomy. His duties included aiding in all aspects of the dissections that helped students learn about the human body.

On this day, his task was to pick up a barrel of onions from a train headed north from New York. Bowker’s last assignment had been to retrieve a package at a Burlington grocery store. This barrel was even heavier and betrayed the unmistakable smell of the raw allium.

Once inside Bingham’s UVM classroom, Bowker opened the barrel. He tossed aside onion after onion before hitting pay dirt. A body.

The grisly cargo would enable his class to learn firsthand, at that time still very much a luxury. But they would need smallpox inoculations: As Bowker dug farther, the characteristic pimple-like macules on the cadaver’s skin made themselves apparent.

Today, Vermont’s medical school trumpets its research triumphs. But in the old days, trainee surgeons kept a lower profile. People associated their institutions not with saving lives but with a ghoulish practice: grave robbing.

Even in the 19th century, few had the privilege of dissecting or “anatomizing” human cadavers. For centuries, surgeons had relied on documents left behind by the great ancient doctors, such as Galen and Hippocrates, who themselves were more likely to have cut open a dog or orangutan than a man. UVM opened the doors to its medical school less than 80 years after London’s surgeons first separated themselves from barbers, asserting themselves as physicians who would perform the procedures previously associated with a shave and a tooth pulling. At the time, medical education still meant apprenticing on the job at a hospital and taking classes in instructors’ homes.

This system resulted in a lack of supervision that worked just fine for anatomists, but not so much for families worried that a loved one might end up in pieces on a surgeon’s table. Without a standard procedure for getting subjects for dissection, teachers and students alike were often forced to rob graves.

In 1796, just two months after Dartmouth College announced the debut of its medical school, fear in the community reached such a pitch that New Hampshire passed legislation against body snatching. In an attempt to protect its eternally sleeping citizens, Vermont passed its own law against “disturbing the remains of the dead” in 1804 — 14 years before the state’s first medical college opened in Castleton. The penalty: a fine of $1000, a year in prison or “39 stripes” at the whipping post.

When the Clinical School of Medicine opened in Woodstock in 1827, the college regularly ran ads that promised citizens, “we are well assured of obtaining competency of the means from remote parts.” Translation? With the closest seaports — the promised source of cadavers — no closer than Boston, the Vermont students were most likely getting their specimens 13 miles across the border in New Hampshire. Dartmouth students probably made the journey in the opposite direction. Missing mother in the Green Mountains? She may be on a slab in Hanover.

In 1830, according to Frederick Clayton Waite’s The Story of a Country Medical College, a sexton at the Hubbardton churchyard noticed something amiss at the grave of Mrs. Penfield Churchill. The county sheriff organized three divisions of 100 men each and stormed the campus of the Castleton Medical Academy. The surprisingly polite militia waited to enter until a student calmly exited the school, holding something under his coat. Inside the classrooms, nothing seemed amiss until one man noticed some loose wainscoting. The headless body of a woman lay awaiting discovery.

Knowing full well of the newly updated law against grave robbing, which raised the sentence to three years’ hard labor, the college’s dean would admit to nothing until the county sheriff guaranteed that no arrests would be made in the case. The dean sent for the student who had passed through the school’s doors earlier. With him came the head of Mrs. Churchill.

Four years later, Burlington dealt with its first documented grave robbery. On March 28, 1834, the Burlington Sentinel declared that “the citizens of Burlington and vicinity are, at this time, under very considerable excitement at a late robbery of the Grave of this town ... the graves of the persons who lately died have been violated, and their bodies removed.”

The name of one of the bodies has been lost to history. The other was identified as “Mrs. Holbrook.” In a letter published in the Sentinel signed by 120 citizens of Burlington, the deceased and her family were described as “highly respectable.” Though the writers admitted it “probable that the dissecting Knife has not been used upon her remains,” they warned that “the disinterment of her remains ... is universally regarded as a vile outrage which will not be submitted to unless the laws have lost their power to punish.”

That was bad news for the Daggett brothers, who were caught transporting the bodies from Burlington to Woodstock. John Daggett, 18, was a student at the Clinical School of Medicine there. His 30-year-old brother, Willard, was a well-known Burlington businessman with a history of lawsuits and ill-advised business decisions. He was known to many around town as the owner of the waterfront tavern that was the site of Burlington’s first bathhouse.

The pair were admitted to state prison in September 1834. After just two months, John was discharged by order of the governor. He graduated from Woodstock in 1837 and, according to Martin Kaufman’s history The University of Vermont College of Medicine, went on to serve in the Illinois state senate. Willard was less lucky. He died in 1838, months after completing his three years’ imprisonment.

The stories continued to pile up like plague dead. When UVM students Winfield Scott Nay and Frank A. Packard were discovered hoarding the body of Joseph Germain, which they had “resurrected” from Milton’s Catholic cemetery, they chose to leave the Burlington area for a few months. Packard returned before the end of the term and graduated on time in 1837. The aforementioned Bowker paid for his education with the $5-per-body rate he received from his professors.

This Wild West mentality fostered unlawful disinterments until, in 1884, a new act decreed that social agencies such as poorhouses and insane asylums were required to turn over corpses of those who died there to medical schools. Wards of those institutions still had a few ways to escape old Doctor Sawbones — veterans were exempted, as were unidentified travelers and anyone who had specifically requested burial.

As surgeons became more knowledgeable, the general population feared them less. The terror of ending up as an anatomical specimen receded. Back in 1830, Benjamin Lincoln, a popular professor of anatomy and surgery, had predicted this evolution in a letter to the Burlington Sentinel, calling the “effects of ignorance of anatomy” the source of his trade’s bad reputation.

Surely Lincoln could never have imagined a day when his school would have an anatomical gift program for citizens willing to donate their bodies to medicine. That day arrived in 1970, when Vermont’s state legislature adopted the Uniform Anatomical Gift Act.

In 2009, the program’s donations declined by half, and UVM faced what Ken Picard called in a previous article in this paper a “critical shortage of cadavers” for the first time in living memory. By July 2010, more donations had put the program “back in the black,” ensuring that students wouldn’t have to resort to learning solely from textbooks ... or worse.

Many Vermonters may have read Erik Larson’s 2003 historical account The Devil in the White City. But fewer are likely to know that one of its protagonists, serial killer H.H. Holmes, had roots in Burlington. In 1878, the 18-year-old New Hampshire native, who had already dropped his birth name, Herman Webster Mudgett, attended the University of Vermont College of Medicine. Perhaps he had a smallpox shot along with A.V. Bowker after dissecting the onion-barrel body.

Saying he wished to attend a larger med school, Holmes headed to the University of Michigan. More likely, he was seeking a populous area to indulge unnoticed in criminal activity. According to Harold Schechter’s true-crime work Depraved, Holmes’ M.O. in Michigan involved stealing corpses from the university, buying them hefty insurance policies, then disfiguring the poor stiffs and claiming his due as their “relative” following an “accident.”

It wasn’t until 1892 that Holmes’ famed Chicago “murder castle” was completed. He later admitted to offing 27 guests at his hotel during the 1893 World’s Fair, though accounts suggest casualties numbered as high as 200. As in the case of Holmes’ fellow Burlingtonian serial killer, Ted Bundy, rumors still fly that the good doctor first plied his murderous trade here.

What we do know is that, in 1894, Holmes dispatched his assistant Benjamin Pitezel as part of yet another insurance scam. The killer then sent Pitezel’s wife, Carrie, on a wild goose chase across North America that ended with three Pitezel children dead. After stops in Philadelphia, Toronto and Indianapolis, Holmes, using the last name Judson, rented 26 North Winooski Avenue in Burlington. He installed Carrie there, with her two remaining children, under the alias Mrs. A.E. Cook.

The house has changed little since 1894, save for the addition of a front porch. Using the alias G.D. Hale of Columbus, Ohio, Holmes checked himself into Hotel Burlington, a lodging located at 121-123 St. Paul Street. If you’ve ever had your hair colored at Jac Huntley, you may have trod where a serial killer once laid his head.

Finally, to rid himself of the Pitezels once and for all, Holmes concocted one of his strangest plans yet. He headed down St. Paul Street to a drugstore, where he bought eight to 10 ounces of nitroglycerin. He carefully placed it in the basement of the North Winooski house, along with a note instructing Carrie to bring the bottle upstairs.

Holmes hoped that, by agitating the bottle’s contents in a long walk up the stairs, Carrie would transform it into a makeshift explosive. Instead, wise to Holmes’ ways, she hastily buried the bottle in her backyard. The apothecary’s cure for angina probably remains beneath the ground on North Winooski.

Holmes was tracked down and apprehended in Boston that November. In court documents, Pitezel describes not only Holmes’ plot to kill her and her remaining family, but also a curious incident in which she found her late husband’s employer “removing some boards on the cellar floor. She says he exhibited much confusion when he found her observing him.”

Is it possible that Holmes returned to Burlington with plans for a final score beyond ending the Pitezel family? He was executed in 1896, having never admitted to a murder in Burlington.