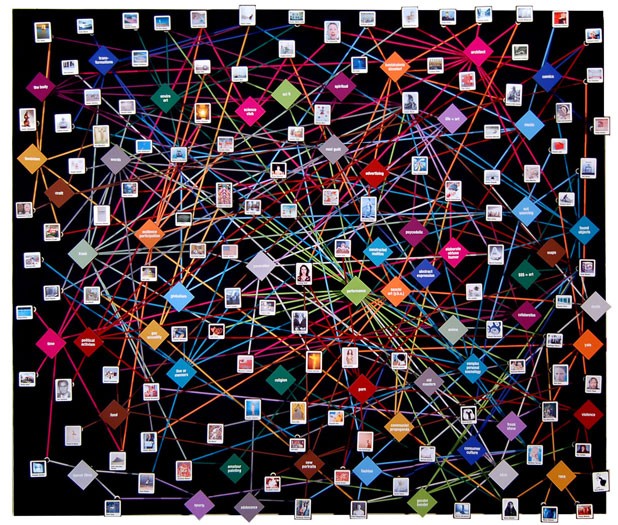 Who has time for an MFA? That's what artist Christopher Thompson asked himself two years ago, after quitting his job as chief technology officer for Gardener's Supply. He decided to self-administer his Master's of Fine Arts in a drafty garage studio.

Thompson's idiosyncratic education produced strange fruit. He discovered the art world is monopolized by a few "blue chip" stars and is perpetuated through high-stakes acquisitions. That's enough to discourage any artist, especially Thompson, now 45, an encaustic painter who works in the hinterlands rather than the New York City scene. But instead, the information-technology pro channeled his research into provocative graphics that depict chains of influence and power. Some of them can be seen in the current group exhibition at Burlington's Firehouse Gallery, entitled "Elusive Truths."

One of Thompson's creations is "Gateway Galleries," a 3-by-1-foot baby-blue diagram that illustrates the connection between Manhattan galleries and art-world bigwigs through a cluster of black lines. "I don't want to get too much into conspiracy theory," said the shaggy-haired former hardcore rocker in his studio last week. "But there's this whole illusion that the art world is going totally global, and it's not true. The power center is in Chelsea, in New York."

Last winter, Firehouse Gallery Curator Ruth Erickson saw Thompson's work. She wondered: Would he be interested in producing more of it for a multi-artist exhibit showcasing "information graphics"? Thompson agreed, and secured grants from the Vermont Arts Council and the Vermont Community Foundation to underwrite expenses. When Erickson left her post for graduate school, she ceded curatorial duties to colleague Katie Attanasio.

The product of a yearlong collaboration, "Elusive Truths" is at the Firehouse through June 14. In the eight-piece installation "1 day MFA," Thompson uses components such as a trample-able floor mat that resembles a Twister board to sketch links between such key art-world players as "museum exhibition," "corporation" and "art trend." By the rear entrance, a digital ceiling projection juxtaposes an undulating, Ganesh-like figure with stats about canonized artists Joseph Beuys, Marcel Duchamp and Andy Warhol. Thompson cheekily refers to the display as his "Sistine Chapel."

"1 day MFA" is supplemented by the work of three other artists. Graphic designer and part-time Burlingtonian Jess Bachman contributed a coal-black poster, "Death and Taxes," that breaks down the federal budget into proportionately sized government logos, and a minimalist slide show in which black dots representing federal funds are projected on a white wall. Joining the Vermonters are New York artists John O'Connor and Ward Shelley, whose quirky drawings riff, respectively, on sociological data and art-world trends.

"Information graphics" have been around for at least a few decades. Thompson says he's indebted to German painter and installation artist Hans Haacke, whose planned 1971 show at the Guggenheim Museum was cancelled when the institution's execs discovered his piece revealed sensitive information about New York real-estate moguls.

Another Thompson inspiration, the late Mark Lombardi, whom Attanasio had hoped to include in the current exhibit, made national headlines in 2003 when the FBI asked to view one of his drawings displayed at the Whitney. Lombardi's diagram, which National Public Radio likened to "conspiracy art," documented links between terrorism and global finance.

"Elusive Truths" hasn't inspired any visits from the feds as far as we know, but the stunning show has been turning heads. Bachman's funereal, 2-by-3-foot "Death and Taxes" poster, which he recently showed on Martha Stewart's TV show, dares you not to scrutinize its fine print. On a far wall, Shelley's three biographical timelines entice Church Street pedestrians with pastel-hued bubbles.

But ironically enough, while "Elusive Truths" proposes to "expose and decode" information, accessing those insights requires a degree of insider familiarity. For example, Thompson's 4-by-5-foot "Artists & Themes," a loud, three-dimensional tangle of square miniatures that represent about 200 contemporary "blue chip" artists and some common aesthetic mantras, is better understood if you actually know who the artists are. (Perhaps that would help explain why the performance artist Joseph Beuys is linked with "food," "found objects," "political activism" and "Nazi guilt"?)

Ditto for Shelley's "Addendum to Alfred Barr," a drawing that positions the former Museum of Modern Art director's life timeline in linear juxtaposition with information bubbles containing such artsy descriptives as "fauvism," "fluxus" and "post-painterly abstraction." The drawing looks simple enough when glimpsed from afar, but without the requisite art-history training, a casual observer struggles to appreciate the nuances of Shelley's sensibility.

"It is a little Chelsea," Attanasio admitted on a recent afternoon at the Firehouse. Perhaps the least informative - and most beautiful - work in the show is "LOCAL," a massive drawing by O'Connor that hangs beside the gallery's Church Street entrance. Measuring roughly 6 by 4 feet, "LOCAL" lures passersby with frenzied lines and dots of magenta, neon-green and gray. The resulting pattern, a sort of fantastical subway map, distills into abbreviations of all 50 states. Three oddly scientific categories - "overweight or obese adults," "binge drinkers" and a row of symbols representing government safety ratings - anchor the visual pandemonium.

After a few minutes of contemplation, however, viewers realize that the lines don't directly correlate with statistics or science. In fact, an accompanying blurb reveals that O'Connor subscribes to something called "swarm logic." Imagine surrealist filmmaker Luis Buñuel working as a consultant for the census bureau.

To counterbalance the show's "gallery aesthetic," Attanasio has taken pains to keep things accessible. She decided not to install benches, for example, so as to discourage excessive contemplation, and placed introductory notes on a front-facing instead of a side wall. The curator, who thinks New York's art scene is both "invigorating" and "horrifying," also wrote the blurbs for O'Connor's and Shelley's drawings, which are typically shown at Brooklyn's Pierogi Gallery sans text.

But Attanasio, an eager twentysomething who schlepped the drawings from the Big Apple to Burlington in a rental vehicle, is careful not to stereotype her local audience. "I hear people say that [Vermonters] don't know what contemporary art is," she noted, "and it's not true at all."

Artist Peter Gallo, a Hyde Park resident who shows regularly in New York, questions the assumption that New York City and Vermont aesthetics are so clear cut in the first place. The art world has grown more dependent on the marketplace than it was when he studied art history at Middlebury College more than 20 years ago, Gallo concedes, but that doesn't mean it's become a "cabal" of blue-chip artists, as suggested by Thompson's information graphics. Plenty of other art "is just as talked about and important," Gallo asserts, and the ease of electronic communication puts a dent in the argument that Vermont is merely a cultural "province."

Besides, Gallo says, even the most talented artists depend on unknown factors for their success. Like, say, luck.

Thompson's "Oeuvre = Mass Media + Transformation + Spectacle," an interactive installation featuring three shoulder-height conjoined white spinning wheels, is both testament and counterpoint to Gallo's last claim. By spinning the wheels, Vanna White-style, a participant produces a turn of phrase - last Friday, as a gallery visitor meandered in from City Hall Park, the device read KITSCH, MUTATION and SIMPLIFY IT. The piece underlines the power of chance: It's highly unlikely that two spinners will produce the same combo. But it also seems to warn that creativity is limited by a finite number of formulas.

Whatever its symbolic implications, "Oeuvre" inspired George Mensh, an artist and senior designer at Burlington's Jager Di Paola Kemp Design, when he spun it on the exhibit's opening night. Thompson used to work at JDK, and Mensh describes "1 day MFA" as an appropriate synthesis of his friend's analytical and abstract instincts, not to mention a "lesson in art history." Mensh suggests that the exercise offers artists a "hope of chance" - of making it on a fluke - despite Thompson's depressing insights into art-world politics.

"It almost showed that there is possibly a sense of randomness to all of the specifics that have been gathered from all the blue chips," the designer recalls. That's a good thing, because "sometimes it feels like, as an artist, you are literally spinning your wheels to come up with the right combination."