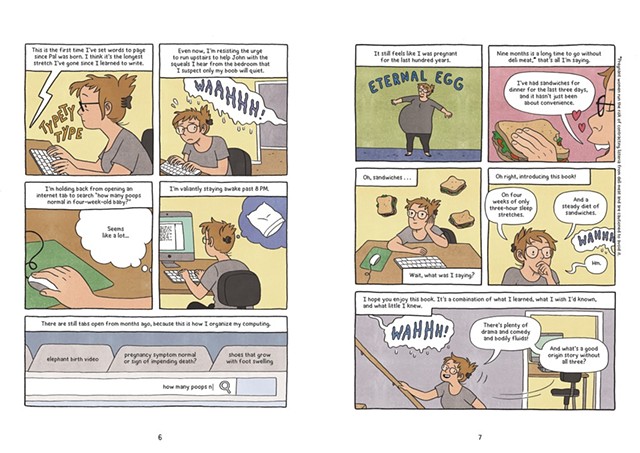 Smart, sweet and often funny, Knisley doesn't hold back on the nitty-gritty details. She renames morning sickness "perpetual and unrelenting nausea" and wonders how anyone survived pregnancy before Netflix.

Sandwiched between the chapters of her personal story are informational panels on topics like "Pregnancy Superstitions" that offer interesting factoids — for example, it's untrue that more babies are born during a full moon.

Originally from New York City, Knisley attended White River Junction's Center for Cartoon Studies, from which she graduated in 2009 with a master of fine arts degree. Her first graphic novel, French Milk, about a six-week trip to Paris with her mother, was published in 2008, followed by five more. She has also illustrated picture books and produced comics for anthologies, including Nursery Rhyme Comics: 50 Timeless Rhymes from 50 Celebrated Cartoonists. Her work has been widely acclaimed, twice making the New York Times best sellers list. In 2015, she was interviewed on National Public Radio's Fresh Air.

Before speaking with Kids VT by phone from her home in Chicago, 34-year-old Knisley warned that the conversation might be interrupted by her 3-year-old son. (It wasn't.)

Kids VT: How did you become a graphic novelist?

Lucy Knisley: My dad thought comics weren't very literary, and my mother thought they weren't very feminist. So I got very good at reading comics critically and looking for an educational, literary bent or a strong feminist character, so I could convince my parents to keep bankrolling them for me.

KVT: Why did you include scientific and historical facts in Kid Gloves?

LK: I set out to make the book I wished I had had when I started to try to get pregnant. I wanted a book that was very honest, but also contained information that I wasn't finding in the research I was doing. Most of it was Don't eat sushi or Your baby is the size of a kumquat. It was helpful, but I also wanted to know the weird stuff no one was telling me. I learned mostly from other parents, who told me things they learned when they became parents. That amazed me at the time. I had this great reproduction education, and there was so much I hadn't learned.

KVT: What's it like to be a mother and an artist?

LK: I was brought up mostly by my mom, who was a chef and an artist. She was very passionate about the things she did. For me, it was kind of always assumed I could do both, because the evidence was there that it could be done. And I still had this weird ingrained societal impulse that I would have to work less to fully devote myself to the baby. And that's not the case at all. I mean, I love being a mom. I love my kid. But I'm still able to work. It's part of who I am. When I was getting pregnant and having a baby, I didn't really have that many peers who also had a kid. It was scary. What happens? You just disappear? What's lovely now is that I know a lot more moms in my industry. They ask me, How do you work and have a kid? You do. You pay for childcare. You find some help. You're having the kid with another person. They have to also figure this out. It's not just up to you. I wouldn't have wanted my mother to give up everything about herself for me. I didn't want to do that for my kid, either.

KVT: Tell us about Go To Sleep (I Miss You): Cartoons from the Fog of New Parenthood, scheduled for publication in February 2020.

LK: The book is a collection of the comics I made right after my son was born. I had a really traumatic birth with him. It kind of rocked me to my core, and I honestly thought I was going out of my mind. The way I found my way back to who I was and who I am now is I had a sketchbook, and I drew the foibles of new parenthood. I thought they were insane; they weren't normal at all. I would post them online and people would comment that was exactly what had happened to them. It was so reassuring at a time when I was sure I was the first person who had ever experienced these things in the entire realm of human production. But a million billion zillion other people have done these things. So I wrote a book for people who might be going through the same thing.