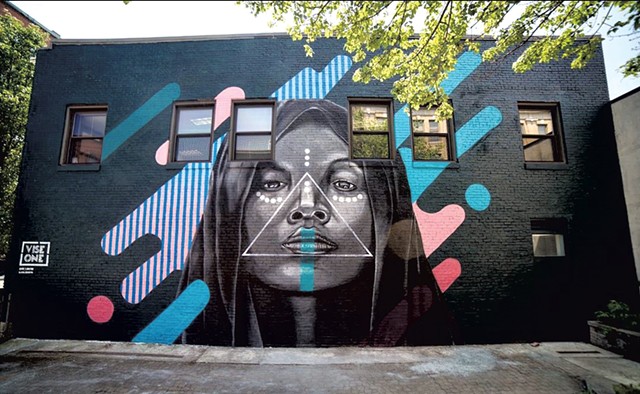 Graffiti has long carried a negative stigma, but an upcoming festival in Burlington just might help to change some minds.

Anthill Collective — a team of artists primarily composed of Scottie Raymond, Brian Clark and Harrison Holmes — has been adorning Chittenden County walls since 2011. Raymond says the idea for a local graffiti festival has been percolating "ever since we started going to events like Art Basel [in Miami] and Under Pressure in Montréal. It's just a really rad way to show Burlington this thing that we love in a way they might get more than they usually do."

Enter Above the Radar, a three-day festival on Burlington's waterfront that begins on Friday evening. Over the weekend, graffiti artists will adorn a 260-foot, west-facing wall of a large building on the Burlington waterfront. Lake Champlain Transportation owns the building, which is near the King Street ferry dock.

And of course, it wouldn't be a festival without music and food to entertain and fuel artists and observers alike. Performers include DJ Kanganade, hip-hop groups Self Portrait and Boomslang, and others. Taco Truck All Stars and Shy Guy Gelato will supply the edible elements.

"[Graffiti is] probably the single biggest modern art movement in the world and becoming more widely accepted, but it's pretty under the radar in Vermont," Raymond says, explaining the name of the festival. "People don't want to see graffiti-lettering pieces — they want to see flowers and birds. We just want to show people that it's a legitimate art form."

Anthill selected a lineup of individual artists and collectives from Vermont and elsewhere to participate in Above the Radar. "We basically started with the people we've met at other events — people we've worked with before, and it just grew organically from there," Raymond says.

Cedric Vise Douglas, who goes by Vise 1, and Julez Roth will come from Boston. Last year, they made a brief visit to Burlington to paint the back of ArtsRiot. 123KLAN will make the trip south from Montréal. The French-born husband-and-wife duo focuses on fusing graffiti styles with contemporary design and frequently collaborates with sportswear brands.

In all, 25 artists or groups — including Anthill — will be painting this weekend. According to Raymond, there's a waitlist for others who would like to join in.

Each artist or group will be assigned a small length of the long wall, which already has been primed with 36 gallons of black paint. The Local Color program operated by the Chittenden Solid Waste District donated 20 gallons of recycled top coat; Benjamin Moore, via Vermont Paint, donated some of the base coat and gave Anthill a reduced rate on the rest. Kobra paint donated about 150 cans of spray paint for the artists, Raymond estimates.

The artists themselves will determine the murals' content. There's no set theme, Raymond says, other than the festival's name. "Rather than telling people, 'This is the concept we want you to work with,'" he explains, "we want you to meet your neighbor and collaborate. Hopefully, everybody will inspire each other."

And, he also hopes, the artwork will inspire city residents to take the genre more seriously. In the description of the festival on Facebook, Anthill says it envisions graffiti as a medium for social change. "With most visual art, you have to walk into a gallery or museum," Raymond says. "Graffiti confronts people on the street. I see it as a way to convey a message."

Former Dealer.com employee Jill Badolato, who worked closely with Anthill to secure funding for the festival, agrees. In her 12-year tenure at Dealer as director of corporate social responsibility, she coordinated a multitude of public art projects, including painted recycling containers for CSWD, art-spangled doors at Camp Ta-Kum-Ta, a mural at the King Street Center and painted sails at the Lake Champlain Community Sailing Center.

"I like to look for canvases that fuse business, art and community in unexpected ways," Badolato says. "I consider myself an art instigator of sorts. Most of the cities I have traveled to around the world [during] the last decade revere and celebrate street art."

Badolato has worked with Anthill on previous projects and expresses confidence in Above the Radar.