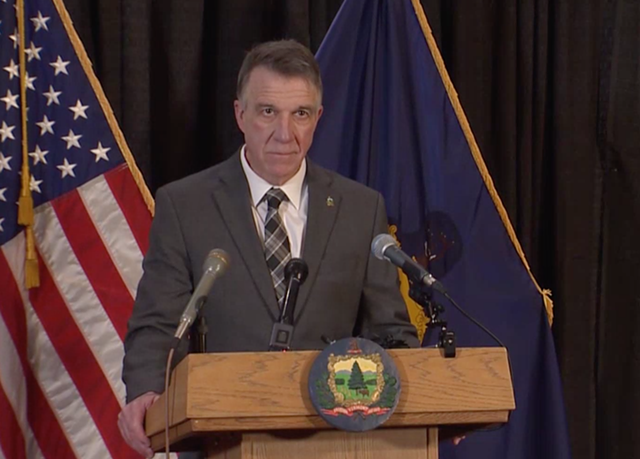 Gov. Phil Scott on Friday vetoed H.715, a bill that was designed to reduce fossil fuel heating emissions through a “clean heat standard.”

In his veto message, the governor repeated his concerns that the bill places too much of the responsibility for the standard in the hands of the Public Utilities Commission without proper oversight from the General Assembly.  He also said the bill’s authors had not done enough research on its potential impact.

“What the Legislature has passed is a bill that includes some policy, with absolutely no details on costs and impacts, and a lot of authority and policy making delegated to the Public Utility Commission (PUC), an unelected board,” Scott wrote.

Fuel Dealers and Environmentalists Are Fired Up Over the Clean Heating Bill
By Kevin McCallum
Environment
The clean heat standard would require fuel dealers to decrease the amount of fossil fuel they sell over time. Alternatively, they could offset that by selling more biofuels, installing electric heat pumps and weatherizing homes to cut down on fossil-fuel consumption. The bill was drafted as one means of meeting the requirements set out in Vermont’s 2020 Global Warming Solutions Act, which includes aggressive reduction targets for fossil fuel emissions.

That law enables members of the public to sue the state if it fails to take sufficient steps toward cutting emissions by 15 percent by 2025, 40 percent by 2030 and 80 percent by 2050.

The bill would give the PUC until January 2024 to formulate the rules after at least six public hearings. Senators included a provision that would require legislators to be consulted before PUC rules are final. But that didn’t go far enough, Scott said Friday.

“Regardless of the latest talking points, the bill does not guarantee a full legislative deliberation on the policy, plan and fiscal implications prior to implementation,” he wrote.

Related The Climate Council Doesn’t Want Its Plan to Burden Vermonters. Did it Deliver?

The Climate Council Doesn’t Want Its Plan to Burden Vermonters. Did it Deliver?
By Kevin McCallum
Environment
The measure passed the Vermont Senate 23-7 on April 28, and the House 88-37 on Tuesday.

The clean heat standard is a priority of the Democratic leadership, and several lawmakers expect to attempt to override Scott’s veto on Monday or Tuesday as the legislative session winds toward a close. An override requires a two-thirds majority vote that would be held first in the House.

House Speaker Jill Krowinski (D-Burlington)  said the clean heat standard had been "the top recommendation of the Vermont Climate Council that we established in the Global Warming Solutions Act." She added, "We will continue to have conversations over the weekend, but my plan is to hold a veto override vote next week."

Advocates said they support an override.

“At a moment when most of the world’s leading climate scientists are, in effect, screaming ‘Now or never!’ on climate action, the Governor’s veto injects tremendous uncertainty ... when we urgently need decisive action,” Johanna Miller, energy and climate program director at the Vermont Natural Resources Council, said in a prepared statement. “I thank the Vermont House and Senate leaders who voted overwhelmingly to advance this bill, and I look forward to celebrating their successful override.”

Matt Cota, the executive director of the Vermont Fuel Dealers Association, said that the measure would be expensive, time-consuming and difficult to enforce.

“This is a challenging spot,” he said.

Correction, May 5, 2022: An earlier version of this story contained an incorrect date for the PUC's deadline to formulate rules. The story has been updated.