Government 101: Legislative Pages Discuss What They've Learned in the Halls of the Statehouse 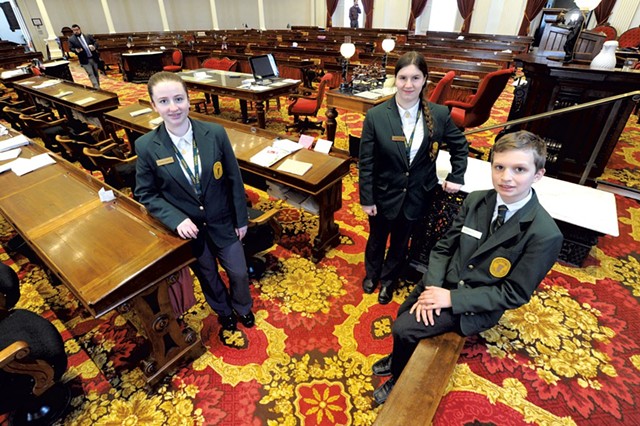 While the Vermont legislature is in session, from January to May, the Statehouse in Montpelier is crowded with lawmakers, lobbyists and reporters. It's not uncommon to see groups of students under the golden dome, as well. Wandering uncertainly through the hallowed halls, they stick out, looking mystified — or bored — by an up-close view of their state government in action.

But a select group of students seems at home here: legislative pages.

Each year, the Sergeant-at-Arms office chooses 30 eighth graders to serve as pages, who hand-deliver messages to members of the Senate, the House of Representatives and the legislative offices. Pages serve for six weeks at a time while the legislature is in session, rotating through the program in groups of 10. They attend their middle schools on Mondays, then spend Tuesdays through Fridays in Montpelier.

The page program has been around for more than a century, and has launched the political careers of numerous Vermont politicians, including current members of the legislature. More than 100 students apply each year for these coveted positions. Just one child from each family is allowed to serve. Applications, which include a cover letter and a letter from the applicant's principal, are due in October.

On an especially busy Friday in March — this session's "crossover" deadline, the chaotic final day for bills to move from one chamber to the other and have any chance of becoming law this year — three pages took a break from their duties for an interview with Kids VT. The trio strode confidently through a maze of busy rooms to a quiet table in the back of the cafeteria, and knew nearly every adult they passed along the way.

The teens hail from all over the state: Sylvan Zeitlyn lives in Burlington and stays with an aunt in Montpelier during the week, Cassandra Summarsell hails from Woodstock and lives with a host family while in Montpelier, and Theresa Hoar lives nearby and commutes to the Statehouse.

But they were all dressed alike — pages wear a crisp green blazer, a white shirt, and dress pants or a skirt or dress for girls. Boys sport ties. All pages wear black shoes and black or grey socks.

Assistant Doorkeeper Michael Wiater and Cornelius Reed, the chief doorkeeper and director of the page program, wear the same uniform as the pages and expect the kids to take it seriously. Earlier this year, Reed sent a page home for wearing red socks.

Both men emphasized the traditional element of the program. Reed sees instilling responsibility and accountability in all new pages as an important part of teaching the civility he feels is sorely lacking in national politics these days. This includes addressing adults respectfully.

The pages don't just deliver messages. During their stint in the state capital, they rotate between three primary jobs: sitting in on the House; sitting in on the Senate; and staffing the Sergeant-at-Arms desk. They also each track a House and a Senate bill, sitting in on debates on the floor and committee meetings when possible, to learn about the legislative process.

For their labor, they receive a considerable stipend for an eighth grader: $130 a week. "It's their first real paycheck," explained Wiater. "It promotes maturity."

Pages are required to stay politically impartial when talking to the public, but among themselves they have spirited discussions and debates, which they say can get tense sometimes.

What advice do these political newbies have for the adult lawmakers in this country? "Find a common goal that everyone's trying to get to," Sylvan said solemnly. "Work together, and focus on that before you focus on the things that aren't important."

It was mostly the election that got me interested — why people have different opinions when the facts are the same.

S.86 and H.171. They're both about expungement [sealing a person's criminal record, effectively erasing it]. There was a big debate, the week before last, that lasted for — it felt like forever.

The debate on expungements really inspired me because there were two representatives that had completely different points of view. One representative, she has a 5-year-old son and was robbed in her own home with her son by her side. She voted yes because she was defending second chances. There was another representative from the same party (Democrat) and she voted no because if she wanted somebody to take care of her 90-year-old mother she would want to know if this person was a drug dealer or a thief.

My second week here. I was helping out these two people in the coatroom and one of them mentioned that one day I'll realize how stingy or how awful politics are, and that once I'm done with the six weeks that I'll stay as far away as I can from politics. So that was a shocking moment.

What do you want to be when you grow up?

My grandfather asked me if I'd ever run for senator. I've never considered it but since he asked me I think it would be interesting. I don't think I'd do it as a solid profession. My profession is sort of out of politics — I want to be a maternity nurse. But I also want a degree in business, and partially photography.

Is it fun to miss school?

I enjoy missing school. I would say at my school there's a lot of drama. I think you escape it all. There's a little drama [at the Statehouse], especially with our discussions, but it's nice to be in the real world and work with adults.

Because I wanted to see the inner workings of the government and how decisions are made — because there are different opinions — and how it's settled. I think it's been really cool to just see how everything is run from an inside perspective.

S.32 and H.39. H.39 is on storm water permits and how big of a land you need to be developing to require a permit. The present law is it's an acre, and they want to change it to half an acre. And S.32 is on state procurements regarding climate change — so when the state would hire people to do jobs. The bill is basically saying that they want to give thoughtful consideration to [environmentally responsible companies].

Some things that aren't as pressing that seem to be discussed more than the items that are. My first day in the senate it was something about the Battle of Bennington and where it was, and the wording of where it was because technically, apparently it was in New York, and that's what it had said. And one of the senators actually said: I feel like there's been a trend that we've been discussing things that aren't important, and this is silly.

What do you want to be when you grow up?

I like working with younger kids. I have a lot of siblings. So I've thought about being a teacher. This [experience] has brought more light to the fact that I wouldn't mind being a politician either. I do like to see all the sides to everything. I like to keep feelings out of it, but morals in it. I've also thought of being a lawyer. I'm not dead set on anything yet.

It seemed like an interesting experience, and I thought it would be a good way to meet a lot of people in politics.

Did you know there was a rally about this issue yesterday?

I went to it. I was afraid I was going to get hypothermia because it was so cold! I've only gotten to hear arguments for it because I went to the rally and everyone there was in support of it. I haven't gotten to hear any arguments against it, so I'm excited to hear the other political view.

How much the Senate and the House often seem very divided, but they also often work together. I thought that was kind of cool that even though they work in separate areas and they don't see each other, other than in the joint sessions, they still work together on the same issues.

Sometimes when there are things that to us feel irrelevant and they go on for hours on end and it's just like, Why are you spending so much time on this? I personally feel this is [an] important [issue] but I think there was a five- or four-hour session, and they were talking for two hours about one particular bill, which was H.218, an act relating to adequate treatment of dogs and cats. I think the main debate was all about the wording.

Do you think eighth graders could do the same work legislators do?

It's really difficult to change your opinion, especially if your parents or your close relatives or your friends believe something. It's hard to go against them because these are the people you know and trust, and then often you don't formulate your own opinions. So I think it's important that you are able to formulate your own opinions, because if you're just going off of what your parents think or what your friends think, the country's never going to change. And we definitely need change right now.

Have your opinions changed because of this experience?

Not the political views, but my opinions about how to approach someone with different political views have definitely changed, just because I have more experience talking to people who I disagree with. It's very important to understand the opposition.