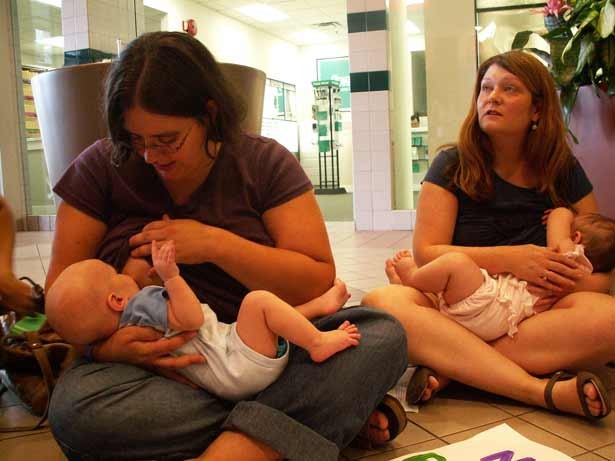 With babies at their breasts, a small group of mothers camped out in front of Applebee's restaurant at University Mall last Saturday afternoon as part of a silent protest against the company's policies regarding public nursing. The local feed-in was a response to an event that occurred at a Kentucky Applebee's, where a nursing woman was asked to cover herself.

In South Burlington, just under a dozen protestors, including mothers, infants and one father, spent the noon hour in front of the restaurant. While babies nursed, the adults chatted with passersby, several of whom offered words of encouragement. One of the mothers, Tabitha Escobedo of Colchester, nursed 9-month-old Ava while her husband Ernest sat nearby. "I'm totally behind it and I think they should be able to breastfeed whenever they want," he said.

"One hundred years ago this wouldn't have been an issue," said South Burlington parent Julie Wahlin as she nursed her 3-year-old daughter, Anna. The Applebee's corporate office stands by its decision to make nursing mothers cover up, but has agreed to offer blankets for them to do so.