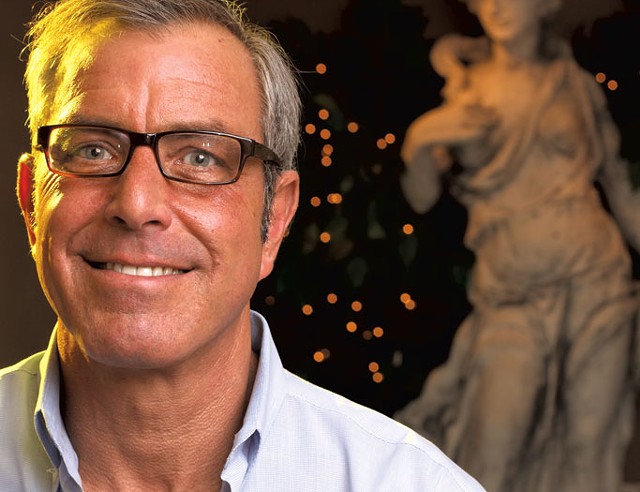 Donald Baker clearly loves his work. Better known to his friends and clients as "Donny B," he has an easy way with people, a skill he likely cultivated over years of selling insurance. It comes in handy in his new job: When you're cooking people's skin to several thousand degrees — albeit for a few nanoseconds — it's best to know how to put them at ease.

Baker, 56, is the founder and CEO of Vermont Laser Services and Laser Tattoo Removal of South Burlington. Since opening three and a half years ago, Baker's office has performed more than 10,000 tattoo-removal treatments, at a current rate of about 350 per month. It also provides medical laser treatments for acne, toenail fungus, scar removal and skin rejuvenation.

While the Stony Brook, N.Y., native took courses for certification in use of the lasers, this is his first job in the medical field. Baker leaves much of the precision work to his team of medical professionals, each of whom has at least a dozen years of experience performing plastic surgery. As he puts it, "I mostly hold the cooling wand."

Baker's office space is warm and inviting, decorated with Greek-style statuary, plants and sailing photos. Those images reflect his other vocation: During the summer Baker runs Champlain Classic Charters, a private boat business with a fleet of three vessels on Lake Champlain.

Baker greets visitors with a big, gleaming smile and a warm handshake. On the day I stop in, he sports a crisp button-down shirt with the collar open and a bronze tan that accentuates his slate-blue eyes. If someone were to make a movie about Baker's life, George Clooney would be spot-on casting.

During our brief tour of the office, Baker proudly shows off the products of another of his pastimes — refurbishing antique furniture.

"I picked this up for 50 bucks," he says, pointing to an end table. His favorite piece in the office is an antique gaming table he scored for $80 and restored.

"Oh, that's gorgeous," says one patient, who's icing down her belly after a laser tattoo-removal treatment.

Depending on a tattoo's size and location, complete removal generally requires five to 10 treatments, spaced four to six weeks apart. Baker ices his clients down for 10 to 15 minutes beforehand, then blows supercooled air over the skin during the laser procedure. Afterward, he applies ice again, followed by vitamin E oil and the type of bandages used in burn trauma units. The cost is based on the tattoo's size and the number of treatments needed.

"We're having fun, man!" Baker says about his work. "We're not a jack-of-all-trades and master of none. Our philosophy is, 'Do one thing and do it great.'" 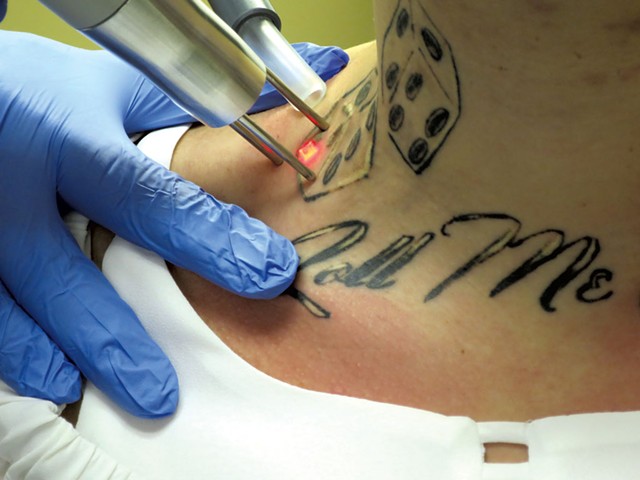 SEVEN DAYS: How'd you get into this business?

DONALD BAKER: The insurance business was extremely kind to me, but I'm a serial entrepreneur and wanted to explore something new. Sometimes you've got to chase your bliss, but I didn't know what that was. So, I took the summer off and I'm sitting in my loft, middle of July at about 10 o'clock at night, and a friend of mine says to me, "Hey, Donny B, did I tell you what I'm doing? I'm opening up a laser tattoo removal clinic." I was like, "That's awesome!" I'd been thinking of opening up a creemee stand.

SD: What's the worst tattoo you ever removed?

DB: We had a guy who came in recently with this alien in a cocoon. It was from a very dark period in his life.

DB: It's super rewarding. People come in because they have something they want to change. They're not here because they need a kidney replaced, OK? These are elective procedures. So, you've got someone whose relationship is broken and [he] has to get Tammy's name off his body. Usually, that person comes in with their new significant other ... Or their paradigm has shifted. They're done with the grunge pit, and they're ready for the country club or the military. We do a lot of wedding band [tattoo removals], like, 10 or 15 a month.

SD: What's the hardest spot to remove a tattoo from?

DB: The most stubborn are the ankles and the fingers. These are cul-de-sacs of our anatomy. Not as good blood flow. Anywhere there's good blood flow is the best — your shoulders, your chest, your arms. I've never done something on the inside of someone's mouth. We remove a lot of teardrops [from faces], too. And here's the really rewarding thing. We help people get back into the employment game. They've got stuff on their hands that are job killers. People thank us. Whereas, in the insurance business, people just complained about their premiums.

SD: How far do people travel for your service?

DB: We've had vans come down from Montréal and the Northeast Kingdom. We've had patients from as far away as Syracuse. The real flattering thing is, we've had people come from southern New Hampshire, and they pass a couple of [laser tattoo removal] locations to get here.

SD: What's the most challenging aspect of your job?

DB: [After a long pause] I'm trying to figure out how to buy an 80-foot yacht and put these [laser] machines on it, and then go from port to port — say, from Jacksonville to Miami — every six weeks, doing it again and again. Ultimately, I'd like to be down in the islands doing charters, but this thing is working now.

The original print version of this article was headlined "De-Ink, Inc."