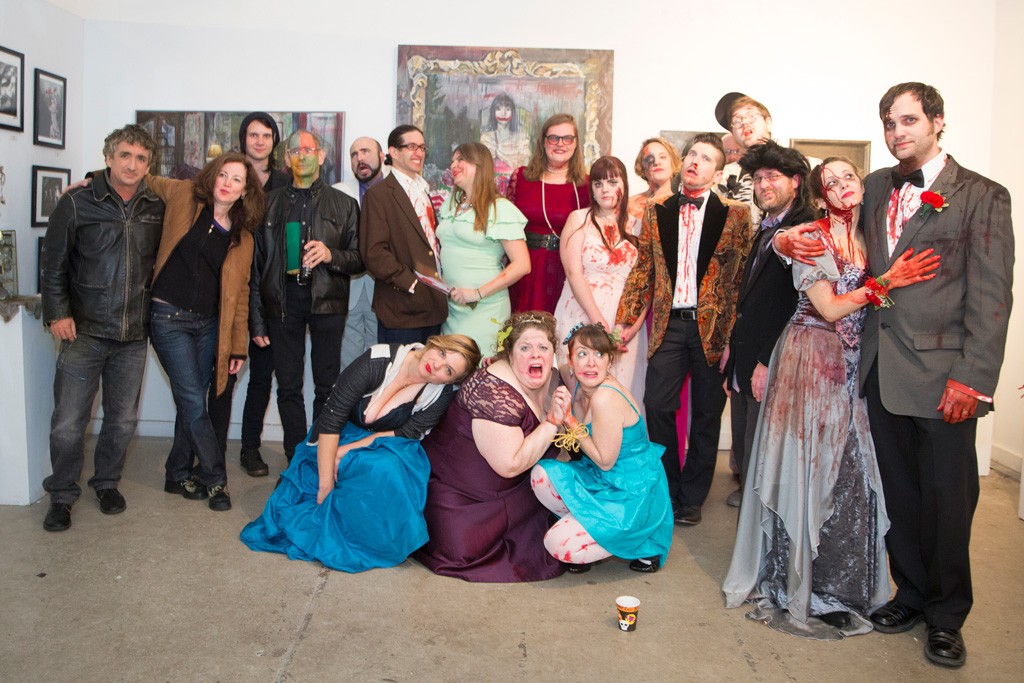 Halloween, as most of the country celebrates it, shed its connections to deathly matters long ago — unless you count the cardiac trauma caused by those "sexy nurse" costumes. Brightly colored candies and a parade of Frozen-inspired costumes do not exactly call ghoulishness to mind.

Leave it, then, to Burlington's Green Mountain Gore Society to recover the true meaning of Halloween — even if it involves a labored pun or two. The film society hosts informal events year-round, but October is when it comes into its own: Halloween is ideal for screening some of the best/worst in cinematic horror.

For the group's second annual monthlong OkGOREberfest celebration, it will screen a bunch of blood-drenched movies, turn an unassuming church into a temple of horror and even organize a "slashtastic" interactive cine-dance. Costumes are optional but recommended, a sense of humor is a must, and it's BYOC — bring your own candy.

Despite its name, the GMGS is run by a few amiable folks who just happen to love horror films, even — or especially — the bad ones. What better way to honor the recently deceased Wes Craven than by screening, on Saturday, October 17, two of the director's "crappy classics": Deadly Friend (1986) and The People Under the Stairs (1991)?

GMGS cofounders Ian Sherman and Janine Fleri started the group about 12 years ago as a way to watch horror movies with friends. "I wouldn't say it was organized," says Sherman. "It was more like, 'Hey, come over and let's watch Zombie Flesh Eaters!'" Fleri describes herself as "incredibly squeamish" and says that diving into gore films is a way to challenge herself. As a longtime admirer of the low-budget horror-comedy Attack of the Killer Tomatoes, she's also drawn to movies that revel in their budgetary limitations. "I like cheesy stuff," Fleri says with a grin.

Sherman and Fleri were responsible for the "Summer Schlock" outdoor film series that, a few months ago, graced Burlington's South End with showings of campy classics such as John Waters' sleazy Female Trouble. Like the GMGS itself, those screenings started out as informal, impromptu affairs that grew mostly by word of mouth.

GMGS has no formal website — just a Facebook page — and usually doesn't announce events until shortly before they take place. "You'll just hear about it when you hear about it," says Sherman. "It works for us, and it's kind of what keeps it fun, too."

But this October is different, with carefully curated gore-tastic events spilling over into numerous local venues. Last weekend, the OkGOREberfest Horror Prom invaded the South End's S.P.A.C.E. Gallery, which hosts the annual "The Art of Horror" gallery show this month. Attendees were encouraged to wear grisly prom attire as they danced along to a screening of the 1980 slasher film Prom Night (natch).

The Gore Society's offerings aren't the only indication that Vermont audiences have a cinematic taste for the bloody or campy. Cinema Casualties, an occasional series at Burlington's ArtsRiot, has treated the strong-stomached to such cult horror classics as the 1982 chain-saw splatterfest Pieces.

The Vermont International Film Foundation is also getting into the act, teaming up with the GMGS to present three late-night horror (or horror-ish) screenings at the upcoming Vermont International Film Festival. These films — the 1980s-style post-apocalyptic adventure Turbo Kid, the Irish monster movie The Hallow and the horror-comedy He Never Died — will show during the fest's "VTIFF After Dark" series, inaugurated last year to great success.

Eric Ford is a member of the GMGS and a longtime horror enthusiast; he's also a board member and programmer at VTIFF, and he admits to a penchant for picking films that "mess with people." Ford says that partnering with GMGS to show the three horror films "does meet our core mission: to show films in public that you wouldn't see otherwise." The "After Dark" films will screen at ArtsRiot, where the casual atmosphere and full bar promote convivial enjoyment of funny, scary movies.

Ford, Fleri and Sherman all stress that such films are best experienced with a bunch of like-minded (or open-minded) people. "It's nice to see a movie with a group of people and not have to be afraid of offending somebody," says Sherman. "These movies can be so wildly inappropriate that watching them with a bunch of people that you don't know is kind of like the weirdest icebreaker."

The programmers of the GMGS are keeping the details of one of their upcoming events under wraps, mummy-style. They won't reveal the film they'll screen at S.P.A.C.E. Gallery's Halloween party on Saturday, October 31, allowing only that it's a "classic." Go see it ... if you dare.