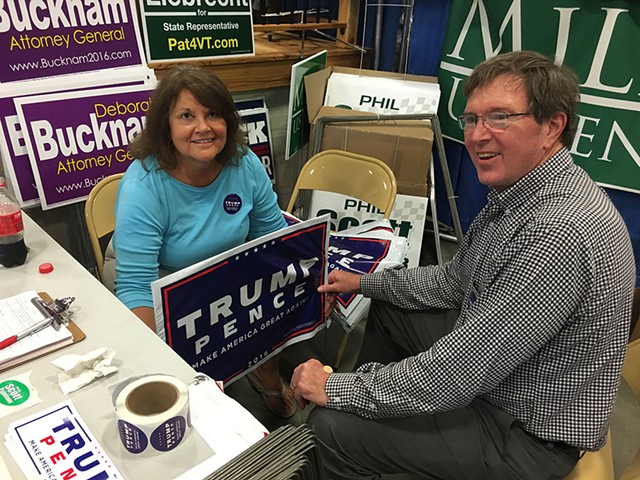 "I support him mainly because I'm worried about safety," Pam Ackerson explained as she assembled Trump lawn signs inside the Robert E. Miller Expo Centre. "And I wanna see a border wall. And I wanna see the laws for immigration enforced ... We're either a country of laws or we're not."

Seated on metal folding chairs inside a Chittenden County Republican Party booth, the Colchester couple occasionally interrupted their sign making to distribute campaign materials to passersby. On offer were pamphlets for statewide and legislative candidates — and a slew of Trump stickers and paraphernalia. Leaning against a far corner of the booth were a few lawn signs for the party's last best hope in Vermont: Lt. Gov. Phil Scott, who is running for governor as an anti-Trump moderate.

"That bothers me — definitely," Pam Ackerson said of the Scott-Trump split. "If you're a Never Trumper, you're for [Democratic nominee] Hillary [Clinton], in my opinion."

Pressed further on what Scott's anti-Trump position said about the LG, Ackerson demurred.

"I'm not gonna answer that," she said.

Andrew Durfee was more forthcoming. As he dropped by the booth to pick up a Trump bumper sticker, the Fairfield RV salesman referred to Scott as "another Republican lite."

"You know what?" he said. "These guys who are afraid to say they support Trump — it's like, you're not gonna get my vote."

Asked who he would support in Vermont's gubernatorial election this November, Durfee quickly backtracked.

"I'm gonna vote for Phil because he's a Republican," he said. "The worst Republican is better than the best Democrat."

Scott is hardly the only leader in his party to have distanced himself from Trump. The list includes such sitting senators as Ben Sasse of Nebraska and Susan Collins of Maine, along with governors Larry Hogan of Maryland and Charlie Baker of Massachusetts. But the Vermonter appears to be one of just two GOP gubernatorial nominees up for election this year to have done so. The other is Washington State's Bill Bryant.

Ackerman and Durfee aside, Scott's stance is most certainly an asset during a general-election race in true-blue Vermont. But it has led to an unusual situation within the local GOP infrastructure: The Vermont Republican Party does not plan to lift a finger for its own presidential candidate.

"Obviously Donald Trump is our nominee for president nationally, and we'll support him," Vermont GOP chair David Sunderland says. "But our energy and our focus is completely on statewide races and continuing to pick up legislative seats."

According to Sunderland and the party's executive director, Jeffrey Bartley, the organization will not mention Trump when it calls voters, knocks on doors or sends mass mailings.

"We've told the Trump campaign that if they want us to be a distribution point for people to pick up stuff, that's fine," Bartley says. "But the focus of our office is to support Vermont Republican candidates."

Sunderland, a former state representative who lives in Rutland, won't even say whether he personally supports Trump.

"It doesn't matter what I think," he says.

That's not to say that the presidential nominee is without friends in Vermont. Trump hired veteran operative Darcie Johnston in May to serve as his state director and recently tapped Charlotte attorney and state party vice chair Brady Toensing to be his campaign's Vermont chair. And local groups, such as the Chittenden County GOP, are free to promote Trump, Sunderland says — as they did this week at the fair.

It's unclear whether Scott's opposition to Trump will cost him — or the state party — financial support. The Republican National Committee, which did not respond to a request for comment, is currently directing just $1,250 per month to its Vermont affiliate, according to Bartley.

"I think the RNC's focus is really more on swing states," Sunderland says. "So I don't think they were going to be a major player in Vermont anyway."

The Republican Governors Association appears to be perfectly fine with Scott's defection. The group has for weeks been running television advertisements promoting the LG.

"It doesn't have any bearing," RGA spokesman Jon Thompson says. "Scott has demonstrated that he's focused on Vermont, not the presidential race, and I think that's something Vermont voters appreciate in a gubernatorial candidate."

"I think they can put their small differences aside there and know that Phil's the candidate who's gonna make Vermont more affordable," she says.

While the Vermont GOP is firmly behind Scott, it's hardly flush with resources. The organization has raised just $191,000 in its federal account this calendar year and had just $8,580 in its coffers earlier this month, according to its latest filing with the Federal Election Commission. The Vermont Democratic Party, by contrast, collected $474,000 and had nearly $58,000 in reserves.

The GOP is also outmanned. In addition to Bartley, it has just three others on staff. It's opened six field offices, some of which are operated by volunteers.

The Democrats have a far more sophisticated operation. The party has 20 full-time staffers on the payroll — including nine field organizers and three regional field directors — and has 11 offices open, according to spokeswoman Christina Amestoy.

Since June, coordinated campaign director Cameron Russell and his team have been running a $700,000-800,000 effort to identify likely voters and build a field apparatus for whichever candidates won the Democratic primaries. The party has already attempted at least 170,000 voter contacts, Russell says, and is set to exceed by 150 percent the 300,000 it made two years ago.

Political professionals generally agree that even the best field organizations only shift a race's outcome by a few percentage points — but that can make all the difference.

"We're pretty confident that in 2014, were it not for the field program, we may well have lost that race," Russell says, referring to Democratic Gov. Peter Shumlin's 2,434-vote victory over Republican Scott Milne.

Even if 2016 turns out to be a banner year for the GOP, Republicans are limited in how many offices they can fill. The party failed to find candidates to challenge Congressman Peter Welch (D-Vt.), Treasurer Beth Pearce or Secretary of State Jim Condos. Even the fringe Liberty Union Party managed to recruit more statewide contenders.

And while Scott may be the strongest candidate the Republicans have run since former governor Jim Douglas, not everyone on the slate is making a real go of it.

Essex consultant Dan Feliciano, who ran for governor in 2014, is challenging Democratic/Progressive state Auditor Doug Hoffer this fall. But Feliciano has been working in Mexico for the past two months, returning to Vermont only briefly for weekends. He confirmed his new gig in an email to Seven Days a week and a half ago but hasn't responded to requests for an interview since.

"Is that why I don't see him?" Republican attorney general candidate Deb Bucknam says of Feliciano. "I don't think I've ever met him."

Milne, meanwhile, is running one of the most unconventional U.S. Senate races in the country. The almost-governor challenged 42-year incumbent Sen. Patrick Leahy (D-Vt.) in May, but he hasn't held a single public event since. He has raised almost no money, has barely updated his website and says he doesn't plan to hire any staffers. His daughter, Elise Milne, couldn't start her unpaid gig as his campaign manager until she took the bar exam last month.

That's not to say that Milne's been taking it easy. He says he spends roughly an hour a day standing by the side of the road, holding a "Milne for Senate" sign. Seven Days spotted him two weeks ago lurking alone at the southbound on-ramp of Interstate 89 in South Burlington.

"That sign wave went pretty good," he says. "I had one streak of 10 waves and thumbs-ups in a row. But I had a streak of two thumbs-downs, four no-responses and then two birds in a row."

Rounding out the Republicans' statewide slate are Bucknam, the AG candidate, and Randy Brock, who is running for lieutenant governor. Both have been working hard and coordinating with the Scott campaign. But both face energetic, well-financed Democratic opponents: Chittenden County State's Attorney T.J. Donovan, who is running for AG, and Sen. David Zuckerman (P/D-Chittenden), who's running for LG.

Bucknam acknowledges that her party hasn't put together the strongest team.

"We haven't filled out the top tier, but that'll be next election," she says with a laugh. "That's another reason I'm running. It's good for democracy. It's good to have competition."

Indeed. Vermont could use a little more.

Milne may not be running much of a campaign, but Sen. Leahy seems strangely reticent to debate him.

As we reported last week, the Republican challenger has been trying, without success, to talk the Democratic incumbent into at least four broadcast tête-à-têtes — on WCAX, WPTZ, Fox 44 and Vermont PBS. But Leahy has said he'll only take part in three — on Vermont PBS, Vermont Public Radio and Burlington public access station Channel 17 — and he will not participate in any newspaper debates.

"Sen. Leahy's first priority is the job Vermonters elected him to do," Tilton said in a press release, "but he looks forward to returning to the campaign trail once Senate business concludes this fall."

Um. What? The Senate started a seven-week recess on July 18 and isn't scheduled to return until September 5.

When Seven Days pointed out the discrepancy, Tilton said he "should have been more clear." But even after repeated requests, he would not provide a detailed schedule of what Leahy's been up to for the past six weeks.

Tilton did provide another explanation as to why Leahy wouldn't take part in debates hosted by, say, WCAX, WPTZ, Seven Days or the Burlington Free Press: "precedent."

"Traditionally, there are three debates in races for the U.S. Senate and the U.S. House," he said. "Senator Leahy will follow this precedent."

But as Milne pointed out Monday in an open letter to his opponent, Leahy hasn't always abided by such self-set rules.

"You claim that Vermont 'tradition' dictates a limit of three debates for the office of U.S. Senate," Milne wrote. "I found this ridiculous claim all the more disingenuous given you challenged Jim Douglas to six debates in 1992."

Milne also pointed to another ancient flip-flop. During a VPR debate with 1998 Republican nominee Fred Tuttle, Leahy sounded as if he were the president of Common Cause.

"I'm the only person ever elected to federal office in Vermont who's done it without taking PAC money," the senator said. "And I don't. I've seen how the scramble for PAC money allows too many of the special interests to come in."

Leahy's certainly seen it by now. In the past six years, according to the FEC, he's raised more than $1.3 million from special-interest PACs.

Asked for an explanation, Tilton would only say that Milne "continues to run a campaign by press release."