Goodbye Already: I Am Passing the Fair Game Baton in Order to Focus on My Health | Fair Game | Seven Days | Vermont's Independent Voice

Goodbye Already: I Am Passing the Fair Game Baton in Order to Focus on My Health 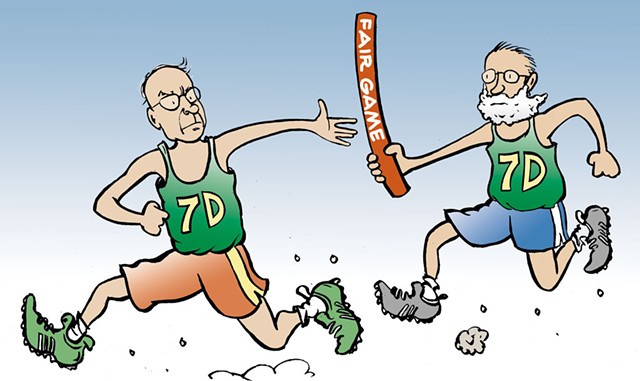 I was fired from my previous job as a radio talk show host at WDEV because management thought I was too opinionated. That happened after I cited some stunning facts — not opinions — on the air: that by November 2019, people involved in then-president Donald Trump's campaign or subsequent administration had been convicted on no fewer than 27 criminal charges.

Another striking fact: As of Trump's third year in office, his administration far outpaced all previous ones, including that of Richard Nixon, in criminal convictions. The first time I cited this information, I got a scolding from my boss. I brought it up again on November 6, three days after the 2020 election. I was fired later that day.

This was four months shy of my 65th birthday, but I didn't want to retire and go out with my tail between my legs. So I began to look for someplace else to apply some of the skills and knowledge I had acquired during more than 30 years as an Associated Press reporter based in Montpelier from 1985 to 2016.

I remembered how much fun it had been to read the late Peter Freyne's political columns in Seven Days back in the 1990s and early 2000s — and how much he seemed to enjoy writing them. It had occurred to me from time to time that it would be a blast to do that job.

From the get-go, I knew my version of Fair Game would be at least somewhat more staid and serious than the wild and crazy stuff Freyne used to write. tweet this

So, almost on a lark, I emailed Seven Days publisher and coeditor Paula Routly, urging her to revive the dormant Fair Game column and hire me to write it. Lo and behold, that's what Paula and her fellow Seven Days editors did.

From the get-go, I knew my version of Fair Game would be at least somewhat more staid and serious than the wild and crazy stuff Freyne used to write. And I wasn't much good at coming up with nicknames, something for which he was famous.

The first two pieces I submitted to Seven Days were rejected. One read like a cross between a philosophical treatise and a Sunday sermon. Too serious. Another was full of dick jokes. Too juvenile. Having established the boundaries by trying to step outside them, I figured anything inside those extremes would work. It's been a fun ride since then.

But now it has to conclude, much sooner than I wanted. A chronic, though likely nonlethal, health problem that seemed dormant when I started this gig has reemerged since late March in a mostly new and quite painful way. It's made the work a struggle. Family and friends have been urging me to retire and focus on my health; I've decided to take that advice.

Here’s the good news, though, and something that reemphasizes for me how sought-after this job is, and how lucky and honored I should and do feel to have held it for a while: A couple days after I told Seven Days editors of my decision, they found an excellent replacement for me. Mark Johnson, a widely respected journalist and broadcaster whose most recent post was a five-year stint at VTDigger.org, is slated to begin writing these columns in June. Johnson has served as a Burlington Free Press reporter, co-owner of WKDR Radio and, for 25 years, talk show host on WDEV.

So, what do I make of the state of the news after four decades in the media? Many newspapers are dying. Commercial radio has mostly given up on news and public affairs and merely dishes up ear candy. Television has bifurcated or trifurcated into competing ideological megaphones. The internet is a cross between a swamp and a jungle. Too many media organizations have responded by dumbing down, emphasizing clickbait over serious content.

But believe it or not, I see signs of hope. Seven Days continues to produce excellent journalism week in and week out; it actually has stepped up its game as older papers, such as the Burlington Free Press, sink toward irrelevance and perhaps oblivion. VTDigger has come on like gangbusters since Anne Galloway launched it a decade ago. Vermont Public Radio and its parent, NPR, have expanded their often-excellent offerings even as other media have contracted.

More fundamentally, human beings want and need our stories to be told. We've known this at least since Socrates said, "The unexamined life is not worth living." I saw this urge fully embodied when, for a column, I talked two weeks ago with students in the University of Vermont reporting and documentary storytelling program. They were passionate about the work they have been doing as journalists for a number of Vermont's small-town newspapers. So, I have hope that this urge — to examine life and tell our stories — will continue to draw young people to journalism.

I'm overwhelmed with gratitude, for Chris Graff and Jon Kellogg of the AP, who took a chance on a young guy from Massachusetts in 1985 and gave me a reason to move to this beautiful state; for all the Vermonters who have shared their thoughts, their homes, and sometimes a hot document or spreadsheet that showed where the money went; for a host of smart and thoughtful colleagues and competitors who've kept me on my toes; for the folks at WDEV, who gave me a crack at talk radio, something else I'd always wanted to try; for my colleagues here at Seven Days, particularly my editors, Candy Page and Matthew Roy, who made my copy way better every week; and for readers and listeners who gave me lots of feedback and, by just being there, a reason to keep doing the work.

My advice: Stay healthy as long as you can. As I've learned too well lately, all else follows from that.