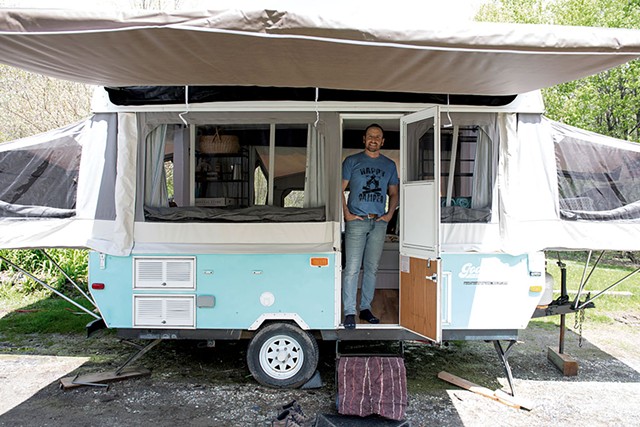 A tent in the woods, a few friends and a campfire is the best thing about summer for some Vermonters, and the more rustic, the better. Others like the idea of camping, but with every passing year, sleeping on the cold, hard ground becomes something to avoid. (Hello, back problems.) What to do if you still crave the great outdoors but not the hassle of roughing it?

One answer is a pop-up camper you can tow behind your car to the outdoor location of choice. But the expense might not be worth it.

"I think seeing pop-ups sitting unused in backyards made us realize that people do want to go camping," says Michael Breyette, 53. "But it's a lot of work, maintenance and investment, especially if you can only go once or twice a year.

"Camping would be so much easier if someone handled all that stuff, and people could just show up, like you booked a hotel," he adds.

That's the idea behind Good2Go Camping, the company that Breyette founded last year with his husband, Eric Masterson Mott, and three friends. They rent refurbished pop-up campers and will deliver them to any of the 10 approved campgrounds within 40 or so miles of Middlebury. All you have to do is book a camping spot, then go to the company's website and choose one of the three boutique, Instagrammable campers: the Jackson, the Templeton or the Diane.

Recalling the company's origins, Breyette says, "We were thinking about how we loved camping, but we wanted something to camp in. Tents are fine, but..."

"We're adults now," injects cofounder Kim Steinfeld, 54. "We don't have to sleep on the ground anymore, do we?"

Breyette and Mott, 51, don't think so. They hit upon the idea for their company while trying to figure out their own glamping setup, looking at pop-ups on Facebook Marketplace and Craigslist. The couple eventually decided that renovating one might be a fun challenge — and a far more comfortable way to hang out in nature.

"Everybody has a dream of buying an Airstream and redoing it," suggests Breyette. "I see those on Pinterest. I can't tackle that. But a pop-up, I thought, There isn't much to it."

As it turns out, there was. So they called in Mott's 84-year-old mother, Diane. She spent hours sewing custom cushion covers, pillowcases and drapes for what would become Good2Go's debut camper, the Jackson — named for the dog of cofounder Mark Sloop. 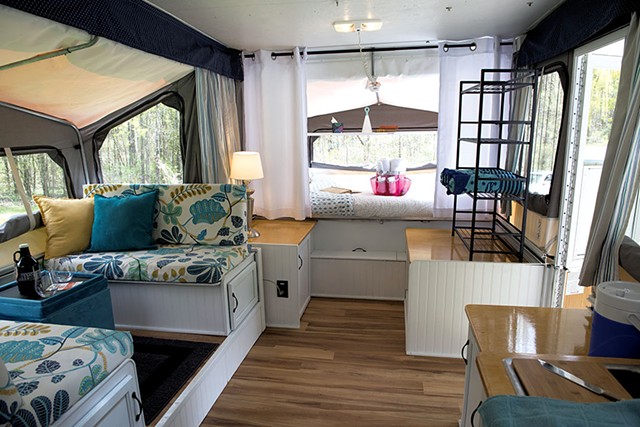 Once complete, however, the Jackson inspired a question: What to do with it during all those weekends when they weren't camping? One night, Breyette had a eureka moment: Rent it out. He enlisted a trio of friends with backgrounds in tourism, and Good2Go Camping was born.

Rehabbing and renting out neglected campers is a rather niche vocation. But the collective skillsets of Good2Go Camping's co-owners are oddly suited to it. Steinfeld is a human resources consultant in health care. John Lezcano, 54, is a graphic designer. Mott promotes tourism in the Baltimore and D.C. areas, while living part time in Vermont. Sloop, 49, is a project manger for a web-design company. Breyette is a full-time artist.

In February 2018, the five friends incorporated Good2Go Camping, LLC. By May, they had purchased a van — affectionately known as "Miss Vanjie." They also launched a related company, Vermont Tasting Tours, which offers excursions to local breweries, cideries and distilleries. Both brands are operated under a larger banner: Green Mountain Tourism. Miss Vanjie sports all three names and logos prominently.

By mid-summer 2018, the Good2Go gang still had some details to iron out. How would they handle booking campsites? How far would they be willing to travel with the campers? What about provisions?

The partners decided that clients would book their own camping spots and Good2Go would set up the pop-up prior to their arrival. When their customers showed up, they would be — wait for it — good to go. The company charges $135 to $185 a night, with a two-night minimum.

For campers who want more space, an additional $50 will get them an attached, screened-in room for the duration of their stay.

Each rehabbed pop-up has its own look and feel. The Jackson, with capacity for four adults, mimics a cozy, screened-in cabin porch. The Templeton, which holds four adults and two children, is clean and modern — more like a sleek B&B than a camper. And the six-person Diane, with aqua upholstered cushions and pillows, white trim and nap-inducing areas, has the airy, spacious vibe of a beach rental on Cape Cod or in Florida. The partners say they'll add more campers to their fleet if all goes well this summer.

Each camper includes amenities such as a Bluetooth speaker, camp chairs and umbrellas. The "Starter Provisions" pack ensures that renters don't get hangry when they realize they didn't plan for breakfast. For $40 extra, chips, salsa, breakfast fixings, s'mores ingredients and even firewood are included. And, Vermont being Vermont, there's a locavore angle.

"We wanted the products to be locally sourced," says Steinfeld. "So the soap is from Vermont Soap Works. We hope to tie in with Lake Champlain Chocolates to leave a little something sweet on their pillow. Just those nice little touches."

According to early clients Jennifer Slocum and Meghan Norwood, Good2Go has accomplished at least one of its central goals: making camping easier. Especially for families. 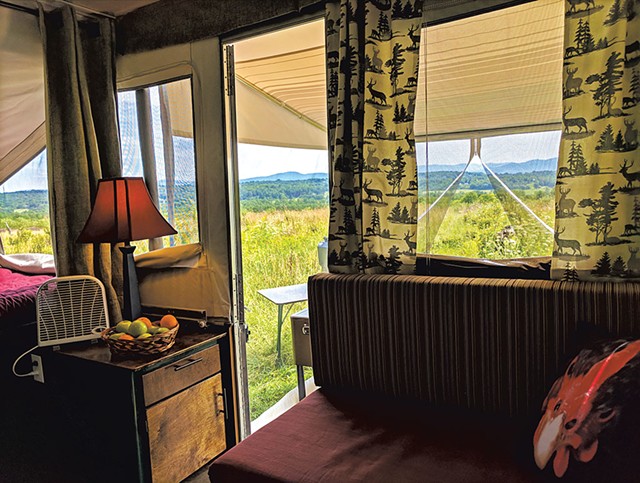 Slocum, 50, is a surgical technologist in Vermont who booked the Templeton for herself and four family members, ranging in age from 7 to 71. They stayed on Lake Dunmore last summer. Slocum admits to being initially skeptical about the rental camper.

"I was more of a cabin or hotel kind of person," she writes in an email. But once her group arrived and saw their accommodations, it all made sense.

"I was so very happy to not have to do any of the setting up or taking down of the camper," Slocum writes. "I loved the fact that I could just arrive and start enjoying my vacation immediately."

Convenience was even more important to Norwood, a 33-year-old stay-at-home mom. She and her husband love to tent camp, but at the time they rented from Good2Go, Norwood had a 1-year-old in tow and was seven months pregnant.

"Camping on the floor was a no-go with a toddler," Norwood writes. "As an experienced camper, having to [just] show up was something I have never done, and it was so nice. I remember they even thought of a water dish for our dog."

According to Norwood, the biggest win wasn't the Vermont products or the upholstery. Her lasting impression echoes the Good2Go tagline: "You'll have stories to tell."

"We got out of the house, sat by a campfire and had a memorable experience together," Norwood writes. "Our son won't remember, but I will remember the first time we took him camping for the rest of my life."