Good Wood: Jericho Dad and Sons Donate Firewood to Those in Need 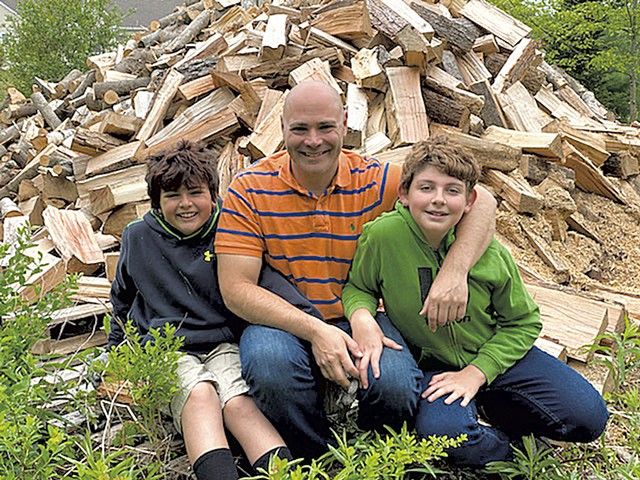 The days might be warming up, but a Jericho dad and his two sons are still in the swing of collecting firewood for next winter.

But it's not all for them. Since last November, Eric Axelrod and the boys — Devin, 13, and Logan, 10 — have been stacking fuel to give to those in need. It started with a surplus of firewood and morphed into a mission to give back to the community.

Axelrod posted on Front Porch Forum that he had fuel to spare and immediately received three requests. One of the first recipients was a man who'd been burning his own furniture in his home to stay warm in the winter, according to Axelrod.

"The boys have really been into it, giving away to different families around, and really found it quite rewarding," he said.

Thus far, they've given away 12 cords of wood. The crew is hoping to collect 20 cords to have on hand ahead of this fall. While they started collecting at their own house, they've also cut wood on neighbors' properties.

The trio has dubbed the undertaking "Wood for Good," and its mission is similar to that of organizations such as the Monkton Wood Bank in Addison County. Axelrod said he eventually wants to form a nonprofit and hopes to sign up more volunteers to help the cause. He'd consider expanding beyond Chittenden County if it takes off.

The need is there, he said.

"There are going to be a lot of hurting people next year. I can't imagine, even if things take a turn for the best, that we're not going to have a lot of people who are in need of help with food and keeping warm," Axelrod said. "This is just something me and my boys have been able to figure out and help people with."

To get involved or request wood, email woodforgoodvt@gmail.com.

802 Much Wood for Good firewood