Good to the Last Byte

Gamers who whip up virtual vittles explain the appeal

Christopher Coccaro, a 19-year-old Champlain College student sporting shaggy, shoulder-length hair and a flannel shirt, is throwing together some pork and vegetable soup. First he rapidly chops and slices a few ingredients, including a green onion, carrot and radish. He tosses the veggies into a sizzling pan and stirs them regularly to ensure they don't burn. Then he adds them to some liquid in a pot, drops in the pork and adjusts the temperature. The whole process takes around 4 minutes, but when he's done, there's no steaming bowl of soup to enjoy. Coccaro, a student in the college's e-gaming program, isn't making dinner: He's demonstrating "Cooking Mama," a game for the handheld Nintendo DS. Instead of using a knife or a wooden spoon, he performed his cutting and mixing with a skinny stylus.

Coccaro can easily make fried gyoza and hand-rolled sushi to Cooking Mama's satisfaction. (The temperamental animated woman's eyes shoot flames when you fail at a task.) But he isn't so savvy in an actual kitchen. "I can make grilled-cheese sandwiches; that's about it," Coccaro confesses. He's proof that you don't need to know a saucier from a skillet to enjoy the startling number of "virtual cooking" options that exist in computer and console games and on the Internet.

Why would anyone want to "cook" if they don't end up with a delicious morsel? The millions of people participating in virtual cooking may each have their own motivations, but it seems clear that a game focused on food has a potential mass appeal that games about, say, fly fishing or knitting lack. Maybe it's because almost everybody likes to think about food — for instance, to watch other people stir and sample on The Food Network — even if they can't find the time or energy to make it themselves. Plus, game-based cooking always has a tangible outcome: a meal that can be sold for money, a concoction that restores health or an item that can be shown off to other players. For that reason, even those who aren't foodies in RL (real life in gamer-ese) may opt to stir things up in a game.

"Cooking Mama" falls under the umbrella of what the industry calls "casual games" — addictive, easy-to-learn diversions that can be enjoyed by hardcore gamers and non-gamers alike. It's one of many food-related titles in the casual game sphere, such as "Diner Dash" and "Cake Mania," that test organizational skills and speed by requiring players to perform tasks in a logical sequence within a set time. Most of these games, though, don't actually have anything in common with following a recipe. "Cooking Mama" is unique in making the player simulate the motions and steps of RL food preparation. Participants are scored on the ability to chop quickly, fill measuring cups to just the right point, and keep pots from boiling over.

By contrast, the tasks Marie Cronin, 49, performs in "Cake Mania" bear little resemblance to making a round of carrot cake or mixing up a batch of German-chocolate frosting — and that may be precisely why she loves to play. Cronin is the bakery manager at Hannaford in Williston, where she spends much of her time making actual cakes. When she gets home, she stirs up the virtual kind. "It's kind of ridiculous," Cronin says with a chuckle. "I make cakes all day long, and then I got hooked on this dumb game . . . Some people give me grief."

How does it work? "It's really all a matter of hand-eye coordination," Cronin says. The player controls a character that takes orders from customers, bakes and frosts their cakes by pushing buttons, and snags their cash. As the level increases, the customers stream into the store faster and faster, and the baker must juggle a greater number of cake shapes and icing options. "You've gotta keep your customers happy, because when they get upset, they go off in a huff," Cronin says. She adds, "That happens at my bakery, too."

Cronin enjoyed the original "Cake Mania," which came with her purchase of a new computer. But after her free trial ran out and she upgraded to "Cake Mania II," things started getting a little out of hand. "I had to stop because it was too intense," she explains. "I was coming home and wanting to relax, but then I'd start playing, and I was getting all tense again." Cronin's currently "on the 'Cake Mania II' wagon," as she puts it.

If there's anything more addictive than a casual game, it may well be something called an MMORPG (massive multiplayer online role-playing game), such as "Lord of the Rings Online" or "World of Warcraft" (WoW). These games encompass entire virtual worlds where strangers meet online — WoW boasted more than 9 million subscribers as of last July — and team up to explore, fight, pillage . . . and cook.

Why spend your time over a bubbling cauldron when you could be killing ogres or tracking down treasure? University of Vermont Assistant Professor of English Richard Parent, a gamer and expert on all things digital, cites three reasons. First of all, in WoW, eating food you've prepared is one way to heal your character after battle. "You can either sit down and slowly regenerate your health, heal yourself using magic, or you can eat one of the hamburgers you've cooked up for yourself," he explains. Plus, certain dishes can add useful bonuses to a character's strength or magic.

Second, cooking is considered a "profession" in WoW — just like alchemy, herbalism and lock picking. A gamer who wants to score as many points as possible, i.e., "max out" her cooking, must scour the world for recipes and learn to make dishes such as "soothing turtle bisque" and "dragonbreath chili." Beginners visit a "cooking trainer" who can sell them an easy recipe to get them up and running. "I think they start you off with a loaf of bread . . . Something that's challenging to make in the real world is the easiest thing here," Parent details.

Yes, the game lacks a certain culinary realism. "One of the things you can make towards the end of the game is a hamburger-like substance that gives you all kinds of bonuses," Parent says. The only ingredients needed are meat and a cooking fire. "Here I am expecting to need flour to make the buns. I'm not all that Atkins; I like my carbs," the prof jests. He supposes the designers cut the messy details to keep non-cooks like him from getting bored, but he says, "I find it a little irritating, actually." Then there's the fact that, though characters don't lug cookware through the virtual landscape, they can prepare food over any campfire. Or in someone else's cauldron. "You can cook [a particular dish] in a boiling cauldron that's already full of food. I don't know how," says Parent.

He pinpoints a third reason people like to cook at the keyboard: They like to try on identities. "A lot of the role-playing people go really far with [their food choices] and use that as part of their role playing," he explains. "They may refuse to eat meat and only eat fish. You might have a character who was vegetarian or vegan. It's a way of using food choices in the game to respect and demonstrate your character's personality." 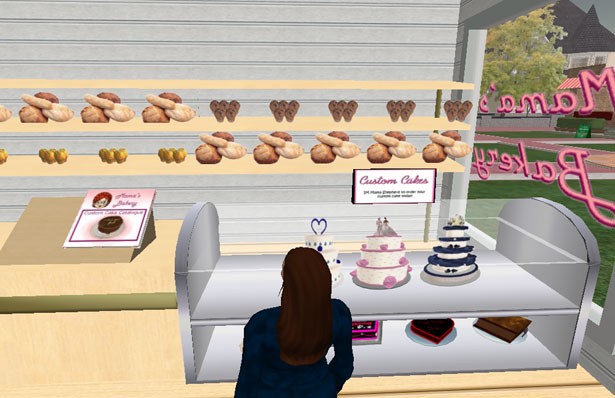 If you want to use food to show off your own personality to the masses, "Second Life" is probably the best place to do it. The gigantic world is a web-based virtual reality, not a game. It's inhabited by millions of "avatars" — stand-ins for real people — and is completely customizable. If you're tech-savvy, you can add an apron and chef's hat to your avatar, carry around a heaping plate of spaghetti and meatballs, or build a realistic-looking refrigerator and fill it with goodies. And if you don't know how to make something yourself, you can buy it with Lindens, Second Life's unit of currency, which can be bought and sold for U.S. dollars.

Strolling through SL for just a couple of hours, I visited a free, all-you-can-eat buffet that offered shrimp-adorned martini glasses and platters of farm-fresh vegetables. I shopped at a gigantic store that sold plates of enchiladas and cups of coffee, as well as fancy-looking serving trays and punch bowls. I saw signs of a distinct foodie presence, like a perfect model of a KitchenAid stand mixer at a tiny bistro. (If you're on the ball, you can also find the occasional cooking demo or class.) And I window-shopped at a bakery whose proprietor served up political commentary along with her fancy, custom-made cakes. Click on her "Victory cake" and text reading, "It's a lie," pops up. Try finding that at Mirabelles.

If you're not a gamer or a web-head, it's still easy to be bemused by all this virtual cooking. After all, eventually everybody needs to unplug and have a real meal — and when that happens, computer-based culinary skills won't get you very far.

Michael Lahens, another Champlain student, sees it differently. A passionate cook in "RL," he simply wants to extend his skills into the virtual world — and indulge his gastronomical fancies. "In games which have cooking elements, I always strive to perform the best in that discipline," Lahens says. "For example, all my characters in 'The Sims' are distinguished chefs."

Lahens also enjoys "Lord of the Rings Online." "While my friends were 'power leveling' their characters," he says, "I was traveling the land looking for recipes." There he discovered "Shire rations," which he imagines consists of "what an average Hobbit would have for lunch . . . a hunk of sharp cheese, a piece of roasted chicken and a whole spiced-apple pie." Simple, perhaps, but a definite improvement over the typical college-student rations of cafeteria food or ramen noodles. "In summation," says Lahens, "I want to live in the Shire." Sometimes imagination tastes better than reality.