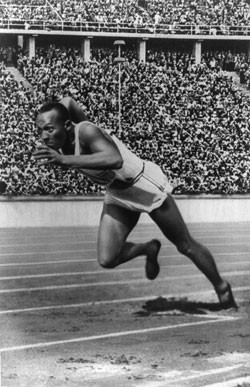 As a kid in the 1960s, I went to a camp where competitive sports were viewed as mildly distasteful, if not explicitly frowned upon. Sure, we gathered in the evenings for rowdy bouts of “Capture the Flag.” On hot days there was “Sink ’Em,” which involved attempting to deluge or capsize the other team’s rowboat while madly bailing your own — mostly an excuse for unfettered splashing.

But this was not an institution that divided campers into two antagonistic nations on Day 1 and recorded all activities as battles in a summer-long color war. No, no, no. Ours was a Quaker camp. We were pacifists.

My Jewish communist parents transmitted a similar suspicion of sport. No one who’s faced one of us over a Scrabble board would accuse the Levines of shrinking from competition. Yet I was given to believe that sports were the exercises of a goyishe-industrial complex, overseen by CIA paramilitaries, training American youth for Cold War hostilities.

So at camp I learned to canoe like an Abenaki and swim like a trout, and at home I was riding a two-wheeler by the age of 5. But where I come from, the physical — especially when dressed up in uniforms and organized into teams — was political. More than that, sport was bad politics.

Then, as an adult, I moved to Vermont, where the entertainment afforded by snow, mountains and lakes far outshines almost anything you can do indoors. In short order, I rejected the family religion and was born again, a jock. I still get nervous keeping score playing volleyball; those Quakers ruined me for anything resembling a race. But if a genie offered to transform me either into Nobel Prize-winning Toni Morrison or Raisa Smetanina, the female world record-holder for 10 Olympic medals in nordic skiing, I’d have a hard time deciding.

Sport, for me, has ceased to be an alien cult whose rites involve sweaty jockstraps, arcane statistics and the ingestion of mass quantities of bubbly beverages and salty foods. I still view it as political — along with a growing list of human endeavors from sex to shopping — but I’ve started to think that athletic competition might be a force for good.

A lot of people feel this way, or at least they feel that international athletic competitions are a venue at which good can be demanded. In recent memory, hardly an Olympic Games has passed without some major political demonstration. In 1968, American runners Tommie Smith and John Carlos raised the Black Power fist from the winners’ podium to tell their own country, “Stop the racism.” In 1980, after the Soviet invasion of Afghanistan, fully a fifth of participant nations boycotted the Moscow Olympics. From 1964 until the end of apartheid in 1996, the International Olympics Committee banned South Africa from the Games.

Through all this I cheered for the activists. Had I been alive in 1936, I’m sure I would have stood with the labor unions and anti-fascists calling to keep the U.S. home from the Berlin Olympics, which the Nazis were touting as a showcase of Aryan superiority.

If the Games were marred, even canceled, as a result of the disruption, so be it, I believed. They were, after all, only games, expendable in the cause of righting the great wrongs.

So I was surprised by my own reaction this month, when Steven Spielberg withdrew as artistic advisor to the 2008 Beijing Olympics, in protest of what he sees as China’s failure to intervene sufficiently in ending the genocide in Darfur. Lay off it, Steve, I found myself thinking. Let the Games begin. What was happening?

Perhaps I felt fatigued. After all, no Olympic political act has ever caused its target to change. The most spectacular example of this intransigence was the Israelis’ response to the Palestinian terrorist murder of 11 of its athletes in Munich in 1972: They assassinated the terrorists. Depicting these events in a feature film in 2005, Spielberg transmitted the message that violence begets violence. This time, he’s obviously acting on the belief that nonviolent protest can end violence. The Chinese replied predictably, with self-justification: China can’t solve Darfur alone, and Darfur is a minor skirmish anyhow, they say. But I agree with Spielberg about nonviolence. And political critique, justified or not, is almost always met with defensiveness — that’s no reason not to make it.

Another Chinese rebuttal — this one made more by citizens in the blogosphere than by the government — represents a more compelling argument for keeping politics out of the Olympics. Spielberg is a hypocrite, his detractors say. Why doesn’t he protest his own country’s failure to send peacekeepers to Darfur, or the U.S. occupation of Iraq?

Indeed. Why single out China or South Africa, the Soviet Union, Israel or the U.S? Imperialist invasions, dangerous ideologies, human-rights violations — were the IOC to expel the doers of all these evils, we’d be left watching Finland compete against Bhutan (and I’m sure some reader will apprise me of the wrongdoings of these apparent innocents, too).

The same thing that makes the Games a bully pulpit also militates against exploiting them as such: Everyone is there. Patriotism is scarcely absent at the Olympics — you’re reminded of this each time a medalist stands on the podium wrapped in her country’s flag, weeping to the strains of its anthem. But nationalism is the opposite of the Olympics’ purpose and value, which is to bring allies and enemies together to compete in a fashion my parents could not fathom — peacefully.

I started out saying that sport is political, then proceeded to argue that the Olympics should be free of politics. So let me begin again. The Olympics are inevitably as political, not to mention as corrupt and commercial, as every other interaction of individuals, institutions, nations, power, prestige and money — witness the doping scandals. In that sense, all we can do is try to keep the Games as clean and transparent as possible.

But sport is, in another way, more profoundly political than any statement anyone can make at any Olympic Games in any country. The political message of sport — the political energy of it — originates in the same place as all social movements do: in the heart, the body, and the imagination.

I’m not just talking about the swell of humanism that watching a great athlete inspires. That feeling we have watching the fastest-ever, 1000-meter runner burst over the finish line, or the perfect-10 diver slice like a scalpel through the pool’s surface — this isn’t an Italian or a Kenyan but a man or a woman, an extraordinarily talented and honed human body. It’s a good thing the 1936 Olympic boycott failed to materialize. Because, of course, it was in Berlin that Jesse Owens, the African-American track-and-field star, took home four gold medals. In Berlin — in Owens — humanism beat fascist eugenics like, well, an Olympic long-jumper beating me.

But you don’t have to think we’re all the same under the skin to believe it’s worth getting together to run a few races (and let’s face it, the Kenyans are faster than the Italians). So there’s another emotion, perhaps even deeper — more personal and less abstract than humanism — that makes sport the exemplar of what politics can be.

Sport is fueled by the insane belief that we gravity-bound flesh machines can fly, that mortals can be gods. What a piece of work is man, sport says, so infinite in faculty! This is a political sentiment.

After decades of disappointments and defeats, politics has become the art — or business — of the merely possible. So wan are our hopes that when a man comes forward speaking in beautiful sentences yet promising little more than the defense of a shrinking list of liberal reforms and the temporary prevention of global annihilation, we exalt him as a visionary.

Meanwhile, in gyms and on tracks and ski slopes around the world, athletes are imagining the unimaginable — the higher jump, the more graceful turn — and then applying all their intelligence, discipline and effort, and then some, to making their visions real.

Sport is the art of the impossible. It is Utopian. This is why, now more than ever, we need sport.

Steven Spielberg — who has created intergalactic friendships and tragic clones, depicted The Color Purple and the Holocaust — is a genius at imagining utopias and dystopias. The man who named his company DreamWorks — and we along with him — should apply the lessons of Hollywood to the Olympics, in Beijing or anywhere else on this cruel and contested Earth: We need spaces to imagine the unimaginable, to dream the impossible. Dreaming is the most political act of all.