How to Make a Clean Sweep of Your Clutter 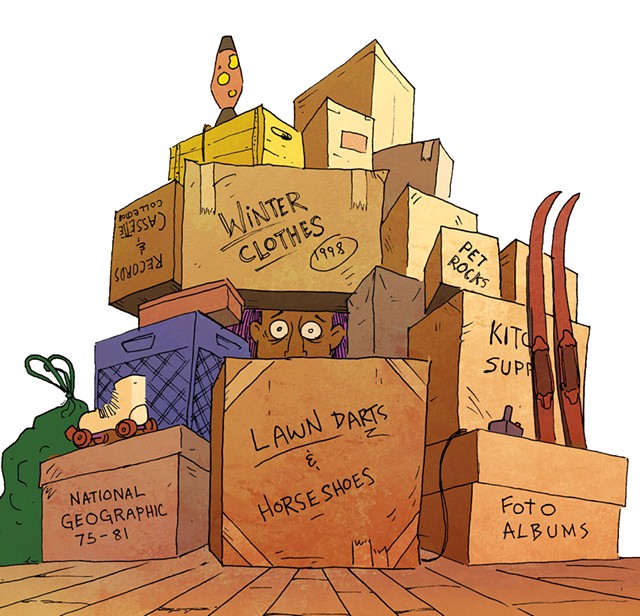 Last fall I stopped inviting guests over for tea or dinner or anything because I didn't want them to see my paper problem. Books, folders, leaflets, mail and magazines — my place was like Staples after a cyclone. I could justify it: As a freelance journalist and teacher, I'm invariably tackling multiple assignments at a time. Pulped tree products strewn across rooms are my occupational hazard. But I could not rationalize the fact that my "tools" were overtaking me. As my husband commented, I'd "desk-ified" the entire house.

So last January I sought a virtual solution: I enrolled in a seven-week e-course called Mindful Clutter Clearing offered by San Francisco-based writer Laura Gaskill. In addition to slaying my paper, I hoped to manifest some Pinterest-worthy interiors: the single candle on a table minus a heap of unread New Yorker magazines collecting coffee-cup rings, or the steaming mug of tea beside a naked laptop minus the draft printouts, sticky-pad notes, cherry pits and capless pens.

Previously, my tidying-up technique had involved purchasing fabric cubes from Bed Bath & Beyond. Holding one open near a slovenly work area, I'd sweep the chaos — whoosh! — into its void. Then I'd stash the bin out of sight. One and done! But eventually my cubes began multiplying beyond the closet. Soon, they were clogging the hallways and occupying chairs, and it occurred to me that I was now somewhere on the hoarder spectrum.

Gaskill's class was my intervention to provide insight and guidance on how to confront my mess, and it connected me with classmates across the country who also were doubling down on their detritus.

Inspired by Gaskill's calm and caring tone, and fortified with her workbooks, podcasts and pictures of serene spaces, I began to beat back my surfeit. One day, I stuffed old tax returns and premillennial phone bills into the woodstove. The next day, I sorted the socks. The next, I inquisitioned my closet.

As the weeks passed, I culled from cabinets, drawers and cubes. Each Friday, we students would check in online to share our progress. This accountability factor kept me motivated to deaccession everything from drinking glasses to dog toys. I even sorted the cutlery drawer. (Buh-bye, plastic forks.)

The neatification spurred teeny eureka moments: "Aha!" I reported one Friday. "This process is actually about self-respect, identity and being b-b-brave!" As my recycling bin and Goodwill box swelled, I swear I felt sharper and clearer mentally.

Caveat: Decluttering is a not a onetime event like an appendectomy. It's a practice best enacted on a regular basis, like brushing one's teeth. And, I'll admit, about 1,445 more pieces of paper have come into this house since Gaskill's course ended, including, ironically, Eve Schaub's Year of No Clutter: A Memoir.

But the Vermont author's book, as it turns out, is a perfect post-decluttering-class text. I was leery that Schaub (who also wrote 2014's Year of No Sugar: A Memoir), would flaunt a tidier-than-thou mentality, but she actually dives deep, literally and psychologically, into her vast hoard of stuff and excavates realizations about why we cling to things that aren't useful.

Chapter after chapter, she confronts her 12-by-12-foot "Hell Room" where, for almost 20 years, she had stashed all manner of nonessential items. In vulnerable, brave prose, Schaub offers up some of her most bizarre keepsakes (a dead mouse, for example), while also exploring her reasoning for keeping it. Often experiencing remorse, she confronts the emotional obstructions in her path to a debris-free life.

I, too, got caught up in a strange logic, thinking that if I got rid of something, I was getting rid of someone — such as, If I let go of my deceased uncle's ruby shirt, well, then he'll really be gone.

For anyone summoning the gumption to purge, Schaub's story of facing her stuff and its stronghold on her psyche makes a great read. "At what point, I wondered, do we hold on to our past so tight that we risk strangling it to death?" she asks.

That's a question I'll be applying to my next household reckoning.

Meanwhile, here are suggestions from both Gaskill and Schaub to help clutter-bust the most object-laden places — whether they're hell rooms, paper-filled cubes or your entire house.