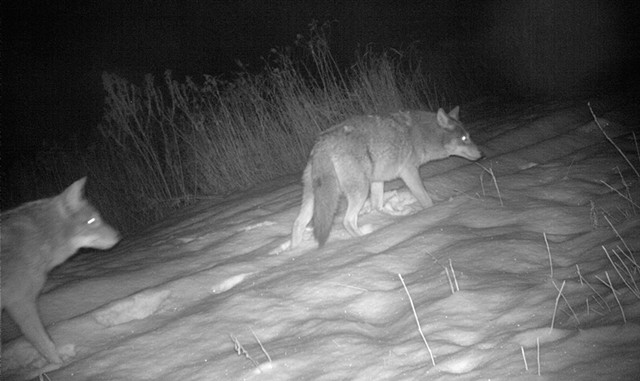 At the beginning of a college course that I co-teach about the art and science of nature observation, I like to have my students watch videos of animals captured on wildlife cameras. The videos I give them were taken at two different beaver ponds over the course of a year — one in northern Minnesota, the other in Westhampton, Mass. The footage is amazing: It shows a stream of bears, bobcats, beavers, birds and other animals going about their lives in all kinds of weather.

There are animals like these all around us in Vermont, but many of them scatter when they sense that people are near. To see them, try setting up a trail or game camera that can document what's happening outdoors when you're not around. These small devices are tripped by movement and heat. They can take regular photos or videos during the day and infrared ones at night.

Saint Michael's College biology professor Declan McCabe has been using them for the last six years. He and his students have placed 22 cameras across the greater Burlington area. You might be surprised by the wide variety of animals they've recorded, including bobcats, coyotes, weasels, deer, opossums, skunks, raccoons and fishers — a small, meat-eating animal in the weasel family that's sometimes mistakenly referred to as a "fisher cat."

One of McCabe's favorite recent moments: An opossum caught on camera pretended to be dead — aka played possum — when it came face-to-face with a coyote. The coyote walked away. Four minutes later, so did the opossum. 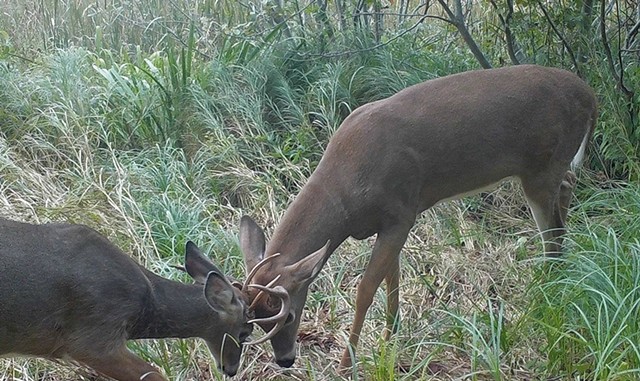 Another time, a camera picked up a weasel holding a mouse in its mouth, then dropping the rodent on a log and walking away to do something else before coming back to pick it up. "It was like somebody going shopping and coming back to their shopping cart," he said.

"You know these things happen," he added. "You know they're out there, but to actually see it is cool."

A basic game camera runs about $80; you can find one online or at any store that sells hunting supplies. Most take both photos and videos, though more expensive models offer higher-quality shots.

There are no legal restrictions on setting up these cameras on publicly owned land, though McCabe confirms that theft is a common problem. If you're mounting one in your yard, you probably don't need to protect it, but if you plan to put one in a busy public natural area, attach it to a solid tree with a Python lock that is thin enough to thread through the plastic loops in the camera that exist for this very purpose.

To capture the best images, McCabe recommends placing the camera a bit above knee height so that it doesn't get buried in the snow. "If you're putting it in an area where deer come through, chest-high is good," he said. 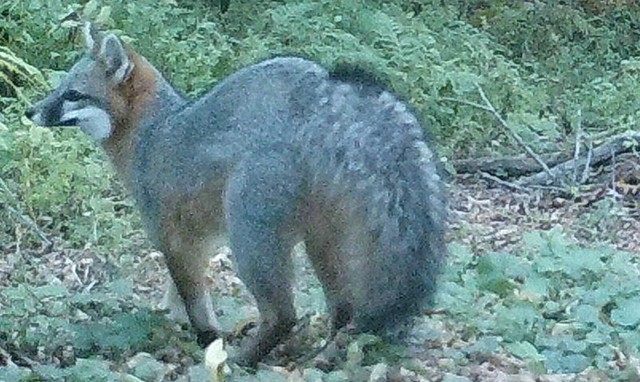 Regardless of how high you put it, aim the lens "lower than you think," he said. Don't point it at the horizon, because most of your frame will be empty sky. Instead, aim it at the ground, ideally at a 45-degree angle. The ground is where the action is, McCabe explained. He also recommends pinning down a small square of landscape/weed-tamping fabric on the ground in front of the camera to keep it from capturing 1,400 pictures of a fern waving in the wind.

As for the location, look for any obvious paths. Animals don't like to walk right through dense vegetation, McCabe pointed out. A fallen log will work well, too. "It's like a little superhighway through the vegetation," McCabe said. He and his students found that sites with logs have six times as many animals compared to those without logs. If you don't have any in your backyard, a hole in the ground can be a great spot, too. If there's no tree nearby, you can always drive a stake into the ground to anchor the camera. Or you could set it up to see who's raiding your compost bin or bird feeder.

Depending on where you live, a backyard game camera might not find bobcats or coyotes, but it's still worth trying. "If you do it long enough, you will see cool things," promised McCabe. "And at the very least, you'll see what's living in your backyard that you never knew was there."

I set out a camera myself recently. I trained it on a known fox den in my neighborhood, and it shifted my understanding in a simple but profound way. I realized that when I'm out walking in nature, I'm usually on my way somewhere and then going home. I assumed that's what animals were doing, too. The game camera helped me realize in a visceral way that, no, they live there — even if they're not coming out to say hi.

Heather Fitzgerald teaches field ecology and environmental science at the Community College of Vermont, Saint Michael's College and the University of Vermont.

The original print version of this article was headlined "Candid Cameras"