We hear all the time about wildfires raging out west, but it's rare to find evidence of forest fires on random woodland walks in Vermont. Ecologists sometimes refer to eastern deciduous forests as "asbestos forests" because, like the heat-resistant, toxic fibers, they are generally so damp it's hard to get them to burn. Still, sometimes it happens.

I know of two kid-friendly hikes in the Burlington area where you can see signs of fire: Eagle Mountain and Sunny Hollow Natural Area. These two burned forests look very different, because they have very different soils.

Eagle Mountain is a great short hike. Alltrails.com says it's 1.5 miles to the top and back, with an elevation gain of 252 feet. If you're trying to sell it to your kids, tell them it's much shorter than Mount Philo!

A few weeks ago, I hiked the trail with my friend Alicia on a rainy day. The thing that initially jumped out to us was all the different textures we saw. There are many ledgy areas with bedrock sticking out of the soil. The rock was the same orangey dolostone you find at Rock Point in Burlington; it kind of has a crosshatched texture, and it's also covered with fuzzy, fluorescent-green moss.

In May, Eagle Mountain hosts a riot of ephemeral spring wildflowers, such as trillium and blue cohosh, that go all out on the forest floor in the brief window of time when the ground has thawed but the trees haven't leafed out yet. The presence of some of these species tells us that the soil here is calcium-rich. The ledges also offer fun, kid-size nooks and crannies to explore. Trees with different types of shaggy bark line the trails, including shagbark hickory (large shags), hop hornbeam (delicate shags) and northern white cedar ("cat scratch" shags).

The first hint that there had been a fire here came as we started walking on the mowed path heading to the summit and noticed some dramatic black stumps. We went off-trail to investigate a few of the more striking specimens, which definitely looked charred.

We decided to test them to see if the blackened part was charcoal. Pro tip: Rub the black part on paper. If it makes black marks, it's charcoal. If it doesn't, it's a fungus that looks a lot like charcoal. What we were seeing was definitely charcoal.

As we walked farther, we noticed that most of the trees that seemed to have been hit the hardest by the fire were northern white cedars. That made sense to my naturalist brain: Some other species we saw, such as shagbark hickory and red pine, have thick bark and deep taproots that allow them to survive a fire, but northern white cedar has thin bark and can have shallow roots, making it less resistant to fire.

The summit offered a fun little loop through the extent of the burned region, plus a great view of Lake Champlain. There's also a slightly larger loop, the Hoyt Lookout trail, and some other trails with enticing names that we didn't have time to explore that day.

When I got home, I did a little googling and found that there had been a fire at Eagle Mountain in 2015, likely from a lightning strike. If lightning struck there repeatedly — and if firefighters didn't put out the resulting fires — we would likely see the composition of the forest change until, eventually, no white cedars remained. 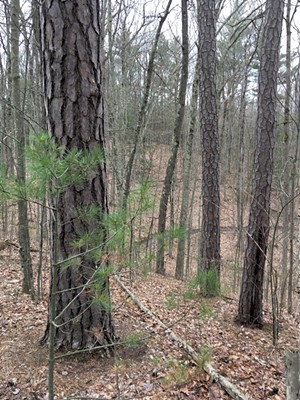 Sunny Hollow in Colchester is also a great manageable walk for kids, but it looks pretty different from the burned patch we saw at Eagle Mountain. For starters, other than some streams that cut through it, Sunny Hollow is flat; it's on an old delta of the Winooski River. Deltas are sandy and therefore well drained — in other words, dry and nutrient-poor — and good places to search for fire-prone Vermont forests. Signs I look for include pitch pines, oaks, multiple-trunked trees whose tops died but resprouted from the roots, scars at the bases of trees, blueberries in the understory, a missing age class of trees — the young trees that got burned in the fire — and charcoal.

I found all of these things at Sunny Hollow, though there hasn't been a fire there in a long time. A firefighter from the Colchester Fire Department once told me that the last one he could remember was a car fire back in the 1970s. I think the last one that burned in the woods was long before that. 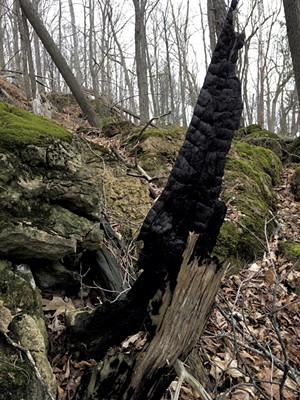 So although there are mature pitch pines, it's getting mighty hard to find a baby one at Sunny Hollow — they have tiny seeds and can really only get established when they don't have to grow up through a lot of dead leaves to get to sunlight. In other words, it's been so long since there was a fire that new, less-fire-adapted forest is growing in.

Looking for clues like this with your kids can set up a fun expedition and teach them a different way of walking in the woods. And, as ever when it's above freezing, hunt for ticks when you get home, too.

What are some signs of forest-fire damage?