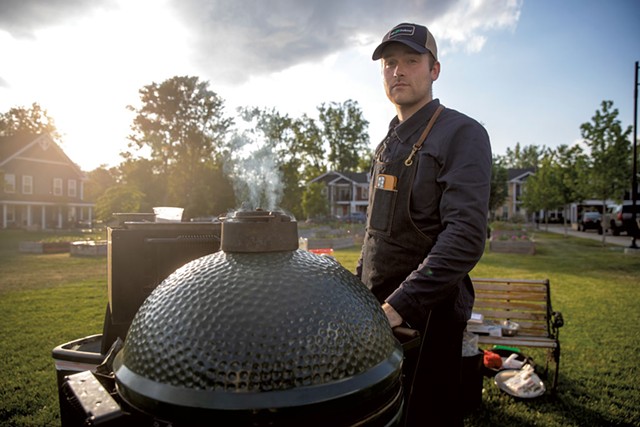 The smell of woodsmoke wafting from a backyard is one of the surest signs of summer. Whether you're throwing an elaborate bash or just cooking up dogs and burgers for the fam, the first step is usually buying a bag of charcoal and dusting off the grill.

Grilling is a big part of Good Grocery, Henry Long's Burlington-based provisions and prepared foods business, which launched in January. In fact, char might be the most common ingredient in his cooking. Long now hosts pop-ups every week or so at Bayberry Commons in Burlington, cooking local meats and vegetables on a Big Green Egg — the envy of many casual backyard grillers.

Long, 23, is a Georgia, Vt., native who started cooking on the grill at Winooski's Waterworks Food + Drink when he was 16 years old. He later graduated from the Culinary Institute of America and was attending business school when he decided to return to Vermont at the beginning of the pandemic. He wanted to be with family and do what he loves most: cook.

The name Good Grocery comes from a common phrase among Long's friend group. "When you're eating something really good, and your mouth's full, you say, 'Oh, that's good grocery,'" he explained.

Long has taken the phrase as inspiration to find the best ingredients around, rather than stick to any specific flavor profile or type of cuisine. Good Grocery's takeout-style menu has featured items such as dumplings made with Pigasus Meats' pork and Funj. Shrooming's mushrooms; charred local vegetable bowls with green tahini dressing; and charred ramp-leaf salsa verde, made with sustainably harvested ramps. And now, most of that cooking takes place outside on the grill.

"It's all about the carbon," Long said. For ease of use, he recommends old-school, open-air, iron-grate grills — and the standby of most American picnics since the 1950s, a classic Weber charcoal kettle grill.

Long's grilling tool kit also includes extra-long tongs, a towel, half- or quarter-size metal sheet trays with a wire rack to keep food from getting soggy, and an instant-read thermometer. He swears by the ubiquitous $10 chunky red thermometer, rather than the fancy Bluetooth-enabled versions that sell for 10 times that price.

We asked Long to share his advice for making the most of your grill this summer. Here are seven of his hottest tips.

It can take a while to get a charcoal grill up and running, especially compared to the instant gratification of turning on a stovetop burner inside. But after all the effort, it's a pretty straightforward way of cooking. To embrace that simplicity, Long suggests buying the best-quality ingredients you can afford.

"Start with a great piece of local beef or pork and let it shine," he said. "You don't need a whole lot of it, and you can almost use it as a garnish." 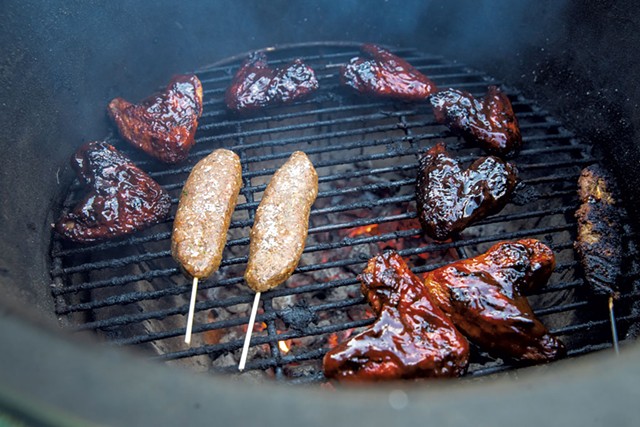 Long also suggests rethinking what gets cooked on the grill in the first place. If you're cutting down the quantity of meat you're cooking, that opens up room on the grate for experimentation.

"Take the strangest thing you wouldn't think of putting on the grill, and try," he said. His first suggestion? Apple pie. Or grilled fruit, especially if you're serving it with ice cream or yogurt. Using a pan on the grill lets you cook down berries and capture some of the smoke and aroma of the grill, giving dessert a deep, slightly savory twist.

The same thinking applies to grilling leftovers: Put your cast-iron pan on the grill and warm up yesterday's fried rice to give it a smoky new kick.

"Grill your salad!" Long advised. Bitter greens such as radicchio or even frisée transform when they're grilled. "Hit the frisée with oil and salt, then touch it on the grill for 30 seconds," he instructed. "Then add some lardons and toss it with a mustardy shallot vinaigrette."

Strike While the Iron's Hot

Vermont's summers are glorious, but they're short.

"When the weather's nice and the winds aren't too windy, make sure you're out there on your grill," Long said.

But be sure to watch the weather report, because it's a losing battle trying to keep a charcoal grill lit during a downpour. Even with Good Grocery's pop-ups, Long keeps an eye on the sky and isn't afraid to move things to a nicer day.

"The fire is a crescendo," Long said. "It starts very, very hot. When you put your food on it, the whole air around it changes and it cools down. Then it heats up again." He likes to make the most of those peaks and valleys, using different moments in the fire's evolution to cook various ingredients.

Throwing sturdy vegetables in the coals is a great way to maximize your grill's output while minimizing your effort. Place peppers, eggplant, onions and other veggies directly on the coals and let them cook, turning as needed until they're tender and nicely charred.

Long's go-to charcoal brand is Royal Oak, a hardwood lump charcoal. He stacks those chunks on top of a base of less expensive standard briquettes — the ones from Costco work fine, he said — for the fire's longevity. He adjusts the blend, sometimes adding in Basques sugar maple charcoal from Québec for a regional touch, depending on the type of fire he's after: super hot or really flavorful, longer or shorter.

He'll throw in different woods for flavor, too, such as dried chunks of apple trees that had fallen at his parents' house. "But less is more with that," Long said. "People think, Oh, just load it in there, but you can smoke your fire out, and if it's not fully dried out, it's just going to be a bad smoke."

Don't Be Afraid of Char

"Underscored. Exclamation point," Long emphasized. The flavor and texture of char is unique to grilling and what makes the effort worthwhile. And if you accidentally overdo it, just scrape a bit off.

"You can't get that wood-fired taste from anything else," Long said. "You can't fake it, and you can't skip it."

Pack up your grill — or invest in a smaller, travel-friendly version — and take the backyard barbecue on the road. Weber makes a small kettle grill that costs less than $40 at local hardware stores; it's ideal for cooking for one or two people, cuts down the amount of charcoal you need, and is portable.

"It's really not hard to do this as a picnic extension," Long said. And while wood-burning fires aren't allowed in the city of Burlington, grills are. Just be sure to check the ordinances of your picnic location and extinguish things properly when you're finished cooking.

Make It an Event

Now that we can convene again, few places are better to do it than around the grill.

"It's ingrained in our biology to gather around the fire," Long said. He loves the celebratory, communal aspect of huddling around a grill to socialize. To fuel his cooking and tide everyone over, he makes sure to have a bottle of natural wine from Wilder Wines — preferably bubbles — and a loaf from Backdoor Bread to char on the grill and dip into Jasper Hill Farm's Harbison.

"Forget your misconceptions about grilling and make it fun," Long said. "Who cares if one of your pieces falls through the cracks? Almost everything is better on the grill."

Order from Good Grocery through direct message at instagram.com/goodgroceryvt or via text at 752-8145. Pop-up menus are announced two or three days prior; pay with Venmo or cash.

The original print version of this article was headlined "Hot Tips"