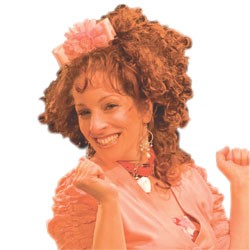 It’s easy to understand why animal owners anthropomorphize their pooches and pussycats. Attributing human characteristics to animal behavior makes sense if you value hard-to-find qualities such as loyalty and unconditional love. Pets make better people than many people do.

Playwright A.R. Gurney unleashes this pro-pet premise in Sylvia (1995), which features a talking dog (played by a woman) in the title role. Can Man’s Best Friend become a more amiable companion than a wife of 20-plus years? In Vermont Stage Company’s current production, director Mark Nash and a frisky foursome of actors enthusiastically embrace the tale’s delicious waggishness. Gurney’s tasty script abounds with kibbles of wit, and the well-trained cast pounces deftly on ’em all.

Middle-aged Manhattanite Greg (Stephen Bradbury) brings home a stray mutt one afternoon from the park, where he is taking refuge from a job he has begun to hate. Dog Sylvia (Kathryn Blume) and new owner bond instantly. “I think you’re God!” the perky pooch professes.

Wife Kate (Melissa Lourie) is not amused. She’s too busy with the “daunting task” of teaching Shakespeare to Harlem middle schoolers, as well as her active social life of concerts and dinner parties with old Vassar chums. She wants to veto the adoption, but Greg begs for a reprieve from sending Sylvia to the animal shelter. He and the otherwise pound-bound hound need each other. Sylvia stays, and a human-versus-canine battle for Greg’s affection ensues.

Not to mix animal metaphors, but directing Sylvia marks Nash’s swan song after a decade at VSC’s helm. The retiring artistic director shows no signs of lame-duckness, however. His ensemble executes the story’s silliest elements with sincerity and commitment, which incite side-splitting laughter. Nash never gives you time to question the play’s improbability because you’re having too much damn fun.

The show was a VSC audience fave eight years ago. Both John D. Alexander — who plays three parts, two of them in drag — and Blume reprise roles from the 2003 production. And both performers are the comedic cat’s meow.

Blume, as Sylvia, makes a perfect bitch: a frolicsome Lab/poodle mix who graduates from grateful to sassy. She bounds around her master eagerly on her paws, er, feet, shaking her tousled mane, wagging her hindquarters and making mooning eye contact that gets Greg to do exactly what she wants. Blume accomplishes this all in entirely human costume; the only canine elements of her wardrobe are a red collar and heart-shaped dog tag.

As Sylvia’s confidence mounts, Blume’s peppy pup morphs into a vampy vixen. You may never look at a dog park the same way after seeing her dash there in 6-inch heels for a canine quickie.

Bradbury and Lourie conjure convincing chemistry as a long-married couple. Bradbury captures how Sylvia reenergizes Greg. His smile brightens, his step lightens, and his eyes dance. As Kate, Lourie tackles the play’s most challenging role with grace. The Cruella de Vil who wants to condemn Sylvia to the pound seems like the tale’s real bitch. Lourie tries to temper her character’s snobbish demeanor, showing that Kate genuinely seeks to understand and connect with her husband.

We root for Sylvia from the moment she bounces onto the stage. And continue to cheer for her, even when she pees on the carpet and gets busy with Bowser. But we learn to root for Kate, too, even though she deserves an unabridged Complete Works tossed at her head for ceaselessly quoting Shakespeare. Because animal companionship means a lot. But sometimes humans make good people, too.

Sylvia, directed by Mark Nash, produced by Vermont Stage Company. April 27 to May 8, Wednesday through Saturday at 7:30 p.m., Saturday and Sunday at 2 p.m., at the FlynnSpace in Burlington. $27-32.50. vtstage.org